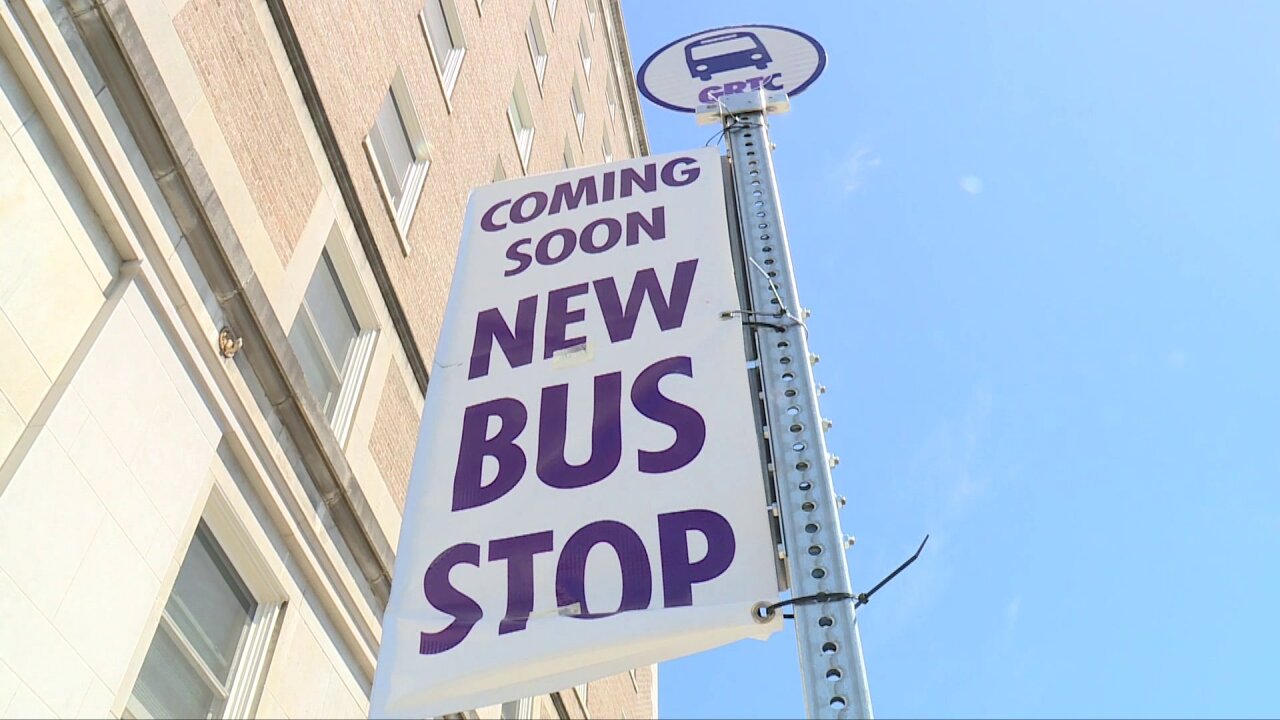 RICHMOND, Va. – Though GRTC held more than two dozen public meetings about the Richmond Transit Network Plan and new bus routes, and said they sent a mailer to anyone within 200 feet of a new bus stop, neighborhood representatives held a press conference Tuesday to express surprise and vehement resistance to a bus stop at Davis Avenue and Broad Street that will begin service on June 24.

Second District Councilwoman Kim Gray said that she heard from hundreds of residents in the area when a sign noting the new bus stop was installed in March. From there she said she created a petition that has garnered close to 1,100 signatures from residents in the area who want GRTC to move the stop from the 800 block of Davis.

The stop will be a terminus point for three new routes — 50, 76 and 77 — which means that between 60 and 70 buses will travel to the stop on Davis and then utilize the 2500 block of Grace St. to turn around.

Almost all of the 107 residents at the William Byrd Senior Apartments signed the petition.  The building manager Kim Adams said tenants are concerned over exposure to bus fumes, as well as noise. She said that over half of their 104 apartments are located on the same side as the bus stop.

“Many of those living here report that they suffer from COPD, sleep apnea and other respiratory illness,” Adams said. “Others have stated issues with anxiety and nervousness, all of which can be negatively affected by the noise and exhaust odors they will be exposed to daily.”

Some of Adams comments were muffled by the loud sirens of passing emergency vehicles along Broad St., as were some of Gray’s earlier comments; a reminder that the apartments are already located at the corner of a bustling vehicular thoroughfare.

Joanne Edwards, who owns the William Byrd Barber Shop said they received “no warning” about the new stop and expressed concerns over a loss of parking and increased disruption. She said that the “severe curtailing” of her business due to a bus stop (that hasn’t opened yet) will cause them to close their doors. She said that 488 of her customers signed the petition.

GRTC spokesperson Carrie Rose Pace said that GRTC and the city already collaborated on relocating the stop closer to Broad than it was originally placed, which will restore some of the on-street parking near the barbershop.

Elsa Woodaman, with the West Grace Street Association, described the three-block circuit the bus will make around the neighborhood as a “mauling of streets” by a “40,000-pound vehicle” that will create a “dangerous and uninviting community.”

Woodaman incorrectly stated that the streets can not accommodate the 11-foot wide GRTC bus and is also concerned that the vibrations will ruin foundations of historic homes.  The manufacturer website indicates the Gillig buses used by GRTC are 102 inches, or 8.5 feet wide, and Rose Pace confirmed the information.

According to Rose Pace, GRTC tested Grace St. and found “it does have lanes wide enough to accommodate the bus, including turns.”

“A loud, unpleasant, and dangerous environment will prove hostile to our residential community and will devalue our old and historic homes, our neighborhood and frankly our quality of life,” Woodaman said.

“We also recognize that allowing this invasion of our neighborhood will open up the door for GRTC to do the same to other historic neighborhoods in this city and we just should not accept that,” she added.

Woodaman’s suggestion was to utilize areas north of Broad St., that are less residential.

Everyone at the press conference beseeched Mayor Levar Stoney to solve the issue, though it should be noted that the mayor and city council do not choose bus stops.

Rose Pace said that GRTC is already working on alternatives and will have a recommended solution as soon as possible. She also  emphasized that the new stops were chosen with community collaboration through the meetings held in 2016 and 2017.

She said it’s too late now to make bus route/schedule changes for next month, but they will be evaluating any new possibilities.

“We are working to accomplish this process as soon as possible. We thank the public for their continued engagement in the route redesign process,” Rose Pace added.

You can watch the entire press conference by clicking the video above.