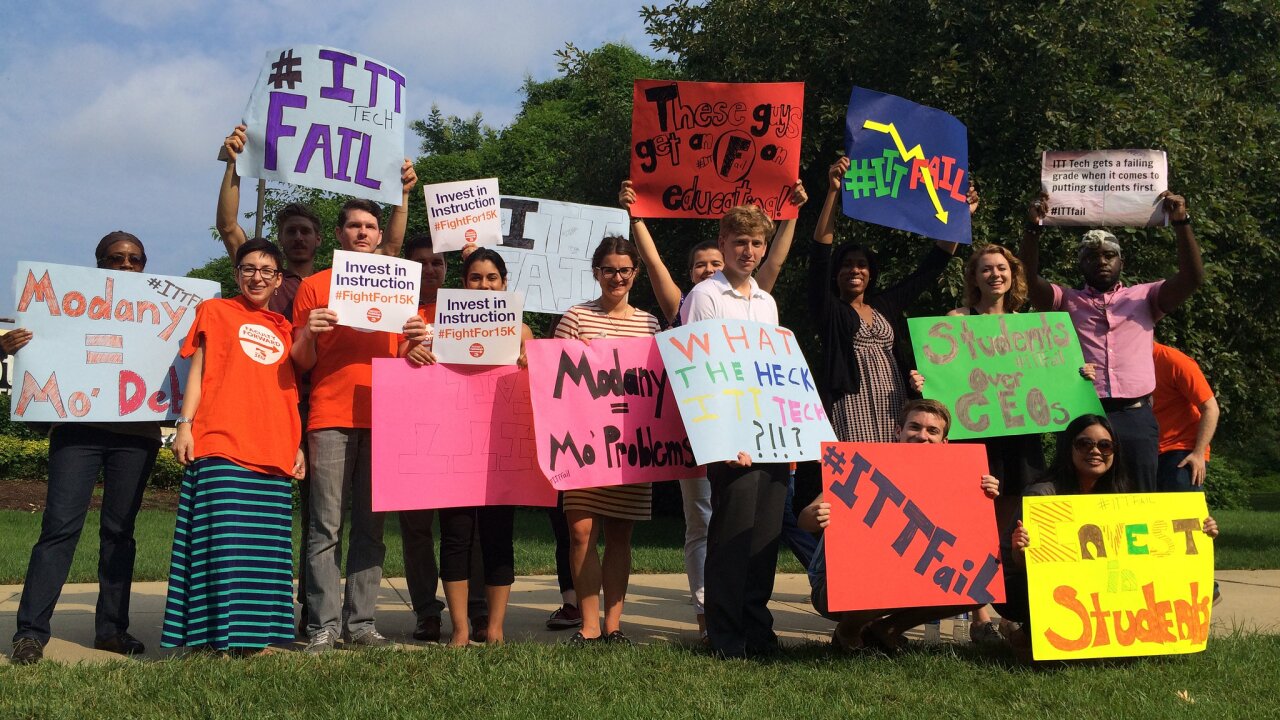 RICHMOND – Bobby Donovan always loved video games. The 29-year-old from suburban Hanover County played games like World of Warcraft and League of Legends daily and worked as a senior game adviser at GameStop for a few years after high school. When Donovan saw ITT Technical Institute was offering a bachelor’s degree program in video game design, he jumped at the idea.

But his hopes of attaining that degree and furthering his career did not last long. Donovan entered the program at the for-profit college’s Midlothian campus in fall 2010. By the following fall, the program had lost its accreditation and was eliminated.

Donovan said ITT Tech received late notice that the video game design program was not meeting the expectations of its accreditor. Contrary to Donovan’s belief, he was never enrolled in the bachelor’s program. Instead, he and other students in the same situation were transferred into a graphic design or visual communications program. And that program was for an associate’s degree, not a bachelor’s.

When Donovan learned the video game design program was eliminated, he looked into transferring schools. But there was one significant issue: What he thought was his best option, ECPI University, another large for-profit institution in Virginia, would not accept his credits. He felt he had no choice but to stay at ITT Tech and complete the associate’s program, which he did. He graduated in 2012.

Donovan, who now lives in Woodbridge in Northern Virginia, estimated that he took out about $50,000 in loans to fund his associate’s degree. His loan debt is split between a federal and a private lender. Approximately $20,000 of it is from the private lender ITT Tech used, who sold Donovan’s debt to Student CU Connect in 2013. The loan has a variable interest rate that started around 12 percent but has increased to about 16 percent. It caps at 16.75 percent.

“The amount is really just unheard of for an associate’s degree,” Donovan said. “If I didn’t have student loans, I would probably have an extra $1,000 every month.”

David Hodges, 31, a former classmate of Donovan’s, enrolled in ITT Tech’s visual communications associate’s program in 2010. He withdrew from the institution after a year.

“I feel that I educated my professors more than they educated me,” Hodges said. “I enjoyed my classmates, but not the program. The art program at ITT Tech is comparable to an eighth-grade art class.”

Hodges, who lives in Richmond, is now a self-employed street artist and fine arts painter, but he said it is no thanks to his time at ITT Tech.

“I tell everyone I’m self-taught because I learned nothing at ITT Tech,” he said.

In 2014, the Consumer Financial Protection Bureau, a federal agency founded in 2011 to protect citizens from unfair bank and lending practices, sued ITT Tech. The bureau alleged the school’s enrollment and financial aid advisors used predatory lending tactics to coerce students into costly private loans they could not afford. The lawsuit also alleged ITT Tech misled students about their post-graduation job prospects and the transferability of earned credits.

“ITT marketed itself as improving consumers’ lives, but it was really just improving its bottom line,” Richard Cordray, the bureau’s former director, said in a news release when the bureau filed the lawsuit. “We believe ITT used high-pressure tactics to push many consumers into expensive loans destined to default. [This] action should serve as a warning to the for-profit college industry that we will be vigilant about protecting students against predatory lending tactics.”

ITT Tech closed its campuses and declared bankruptcy in September 2016, after the U.S. Department of Education judged the school failed to meet accreditation standards twice that year and eliminated ITT Tech’s ability to receive federal student aid. Some students who were enrolled at the time or had recently withdrawn – within the previous 120 days – could apply for loan cancellation, but that applied only to federal loans, not private loans.

Because Donovan graduated in 2012, neither of those options applied to him. He received an email from ITT Tech on Sept. 6, 2016, explaining the school’s closure. The response blamed the federal government for forcing the school to close, Donovan said, and offered no options relevant to him other than providing information on how to obtain his academic transcript.

The email shared a list of schools that ITT Tech said had entered into agreements allowing students to transfer credits. The email also included a list of schools in students’ local areas or online that offered similar programs. Donovan said he thinks the schools ITT Tech mentioned were also for-profit colleges. The website is no longer active.

Donovan said his student loan debt will hang over his head for years to come. He is still motivated to earn a bachelor’s degree, but it is not feasible for him to return to school just yet.

“It’s kind of been put on the back burner after starting a family, getting a house,” he said. “[The debt] affects a lot of things – not just going back to school, but really starting my life outside of school after one huge mistake.”

He also said if he were to pursue a bachelor’s degree at a four-year school, he doubts his associate’s degree would be considered; thus, he would likely have to start over with zero credits.

“I don’t think any actual college or university will actually recognize it as a degree,” Donovan said. “But I’m not 100 percent sure. I haven’t found out yet.”

He is doubtful his associate’s degree has been valuable in his post-ITT Tech job pursuits either, he said, but he remains positive and hopeful for the future.

“The people that I met [at ITT Tech] are great people,” Donovan said. “Some of the teachers were really good. It was a learning experience. I know I’m not going to be bamboozled again.”

By Deanna Davison and Brandon Celentano/Capital News Service
Capital News Service is a flagship program of VCU’s Robertson School of Media and Culture. Students participating in the program provide state government coverage for Virginia’s community newspapers and other media outlets, under the supervision of Associate Professor Jeff South.