World’s tallest geyser keeps erupting, and scientists aren’t sure why 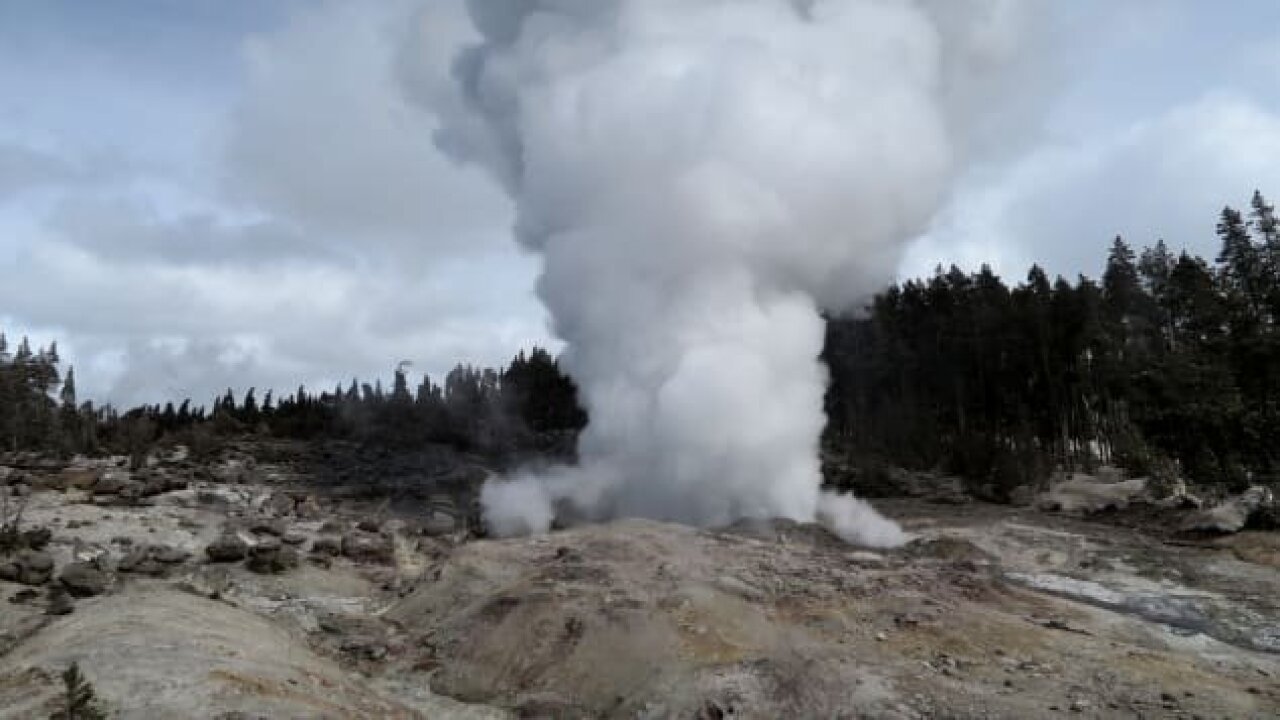 Yellowstone National Park’s Steamboat Geyser just erupted for the third time in two months, and scientists aren’t sure why. It doesn’t erupt very often, but when it does, it is the tallest active geyser in the world. The Steamboat Geyser — known to eject a column of water 300 feet in the air — erupted for the third time April 27. (Credit: Behnaz Hosseini/USGS/National Park Service)

Yellowstone National Park’s Steamboat Geyser just erupted for the third time in two months, and scientists aren’t sure why. It doesn’t erupt very often, but when it does, it is the tallest active geyser in the world. The Steamboat Geyser — known to eject a column of water 300 feet in the air — erupted for the third time April 27.
(Credit: Behnaz Hosseini/USGS/National Park Service)

Yellowstone National Park’s Steamboat Geyser just erupted for the third time in two months, and scientists aren’t sure why.

It doesn’t erupt very often, but when it does, it is the tallest active geyser in the world. The Steamboat Geyser — known to eject a column of water 300 feet in the air — erupted for the third time April 27.

“It is a spectacular geyser. When it erupts, it generally has very big eruptions,” Michael Poland, the US Geological Survey’s scientist-in-charge of the Yellowstone Volcano Observatory, wrote in an email.

According to seismicity data, the recent eruptions have been a little bit smaller than in the past. Even if these latest eruptions are smaller, they are still impressive compared with, say, Old Faithful.

The April Steamboat eruptions discharged about 200 to 400 cubic meters of water each, about 10 times the amount of water released by an Old Faithful eruption. The problem is that Steamboat lacks the faithfulness.

This geyser is in an area of the park called the Norris Geyser Basin, known to be the hottest and most changeable thermal area in Yellowstone.

“Most geysers erupt infrequently, unlike Old Faithful, so Steamboat is not enigmatic in that regard. But Steamboat has a mystique about it because it is the tallest active geyser in the world. It gets attention because of this, and rightly so,” Poland said.

Before March 15, the last time this geyser spewed was in September 2014.

The day of the first eruption, park staff detected activity on nearby seismometers, thermal gauges and water discharge on a US Geological Survey stream gauge.

Yellowstone National Park staff arrived in time to observe steam from the geyser but no water column. According to the Geological Survey, this is a usual occurrence after a vigorous water eruption. The steam phase can last several hours.

Not one person is known to have witnessed the initial water column from these three eruptions. This time of year, the Norris Geyser Basin is closed to tourists until the snow melts and winter damage to trails can be repaired. Once the trails are clear, guests will be able to hike out to the geyser.

If it wasn’t for sensors near the eruption site — and the rocks and mud strewn about that were ejected by the geyser — there it would be little confirmation.

Scientist missed the second eruption by only minutes. A team of Yellowstone National Park Geologists was in the area for the April 19 eruption, but the geyser became active only 15 minutes after they’d left the site.

Poland says the scientists “were bummed. Especially because they didn’t realize that an eruption had occurred until after they returned to the office (about an hours drive from the geyser). If they had left just a few minutes later, they might have seen the eruption in their rear-view mirror.”

The activity of the third eruption was observed from a driver passing through the area.

“Some scientists consider Yellowstone to be a ‘supervolcano,’ which refers to volcano capable of an eruption of more than 240 cubic miles of magma,” according to the National Park Service.

This distinction is based on massive eruptions over 600,000 years ago.

Although the caldera is considered active, scientists believe that it is unlikely to erupt in the next thousand years.

There doesn’t seem to be a direct relationship with these eruptions and the supervolcano, Poland wrote. “The geysering is reflecting processes that are occurring in the shallowest part of the system — tens to perhaps a few hundreds of meters deep, whereas the magmatic system starts about 5 km down. Geysers are supposed to erupt, and so what we’re seeing is normal behavior.”

Jamie Farrell, research assistant professor of seismology at the University of Utah and chief seismologist of the Yellowstone Volcano Observatory, wrote in an email that “The caldera has been subsiding since late 2015 and there hasn’t been any change in that behavior in the last couple of months that we could relate to the recent Steamboat activity.”

Scientists aren’t sure whether the new activity is due to a new thermal disturbance or whether the geyser is merely entering a period of more frequent eruptions, as in the 1980s, when numerous eruptions from the geyser were separated by weeks or even days. Multiple eruptions also occurred in 2003.

Or, the US Geological Survey notes, “the current eruptions may simply reflect the randomness of geysers.” It could be years until it erupts again.

“The fact that Steamboat has erupted three times in the past 6 weeks is a bit unusual for this specific geyser,” Poland wrote, but it’s not unprecedented.

Scientists are hoping that there are more eruptions and that they can figure out how to detect them before they start.

“We are planning on placing seismometers near Steamboat Geyser within the next week. If it erupts again, it would be nice to be able to record any (precusory) activity,” Farrell wrote.

With a seismometer near the geyser itself, they hope to pick up on signals they can’t record in a station farther away.

“By looking at these signals, we can see if there is anything that relates to the ‘build up’ to an eruption. These can possibly give us a way to predict when the geyser will erupt but can also give us insights into what is happening in the subsurface plumbing system before an eruption,” Farrell wrote.

For now, everyone who wants to see the geyser but who is not a scientist will have to wait until the weather warms.

“Perhaps Steamboat will erupt again this summer,” Poland said, “and then lots of people will get to enjoy the show!”