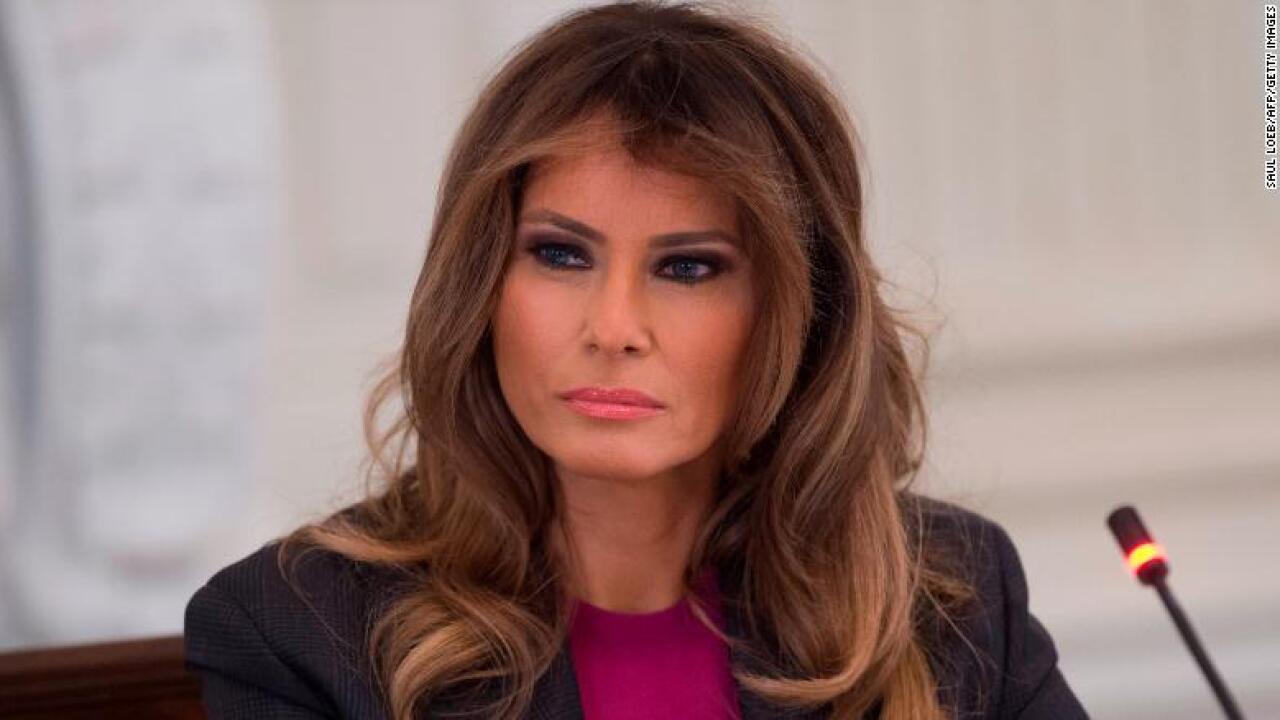 It was three days before the most important dinner party she has ever hosted, but Melania Trump was not at the White House, triple-checking details. Instead, she was in Houston, Texas, to pay her respects to one of her predecessors, Barbara Bush.

The current first lady sat among several former presidents and first ladies in the pews at St. Martin’s Episcopal Church for Bush’s funeral service on Saturday, including former President Barack Obama, whom her husband, President Donald Trump, has often criticized. Michelle Obama was there, too; in January, she joked on a talk show about the way Mrs. Trump awkwardly handed her a gift box on the steps of the White House on Inauguration Day. Mrs. Trump hasn’t seen or spoken to either Obama since then.

Also nearby was former first lady and 2016 presidential rival Hillary Clinton, a favorite target of the President’s tweets, in which he likes to call her “Crooked Hillary,” ribbing his former rival about investigations and emails.

And, naturally, there were many Bush family attendees. The President’s constant primary campaign target, Jeb Bush, whom Trump nicknamed “low energy,” delivered a eulogy to his mother.

In other words, the first lady was literally, and voluntarily, walking into a den of potential adversaries. But as has become a trademark reaction to the drama surrounding her husband, Melania Trump didn’t let on that she cares about any of it, and she certainly wasn’t letting it stop her.

“She was invited to attend and intends to pay her respects to not only Barbara Bush, but the entire family,” the first lady’s communications director, Stephanie Grisham, told CNN, adding Trump is “a confident woman. … I know politics will not be an issue.”

The President was invited, too. But almost two days after his wife confirmed she would be attending the memorial service for Mrs. Bush, the West Wing released a statement saying the President would not, citing a desire not to cause undo disruption.

The services for Mrs. Bush capped a week that included hosting Japanese Prime Minister Shinzo Abe and his wife for two days at Trump’s Mar-a-Lago estate in Palm Beach, Florida, culminating in a dinner for the couple — a smaller dry-run, perhaps, for the mountainous task of the full state dinner that lies ahead in Washington.

Planning for Tuesday’s state dinner, being held in honor of the official visit of French President Emmanuel Macron and his wife, Brigitte, began months ago; it was then that Melania Trump started to think of the details, such as an ideal gift.

CNN has learned one of those gifts will be a framed section of upholstery from one of the chairs in the White House Blue Room. Featuring a golden eagle surrounded by laurels, the chair was part of the furniture suite inspired by Pierre-Antoine Bellangé, who designed royal palaces in France and created the 53 carved and gilded pieces for the Blue Room, which he was commissioned to create by President James Monroe. Monroe had previously served as a diplomat in France and had taken a shine to French décor. Though President James Buchanan got rid of the set in a redecoration decades later, it was first lady Jackie Kennedy who found the spare pieces and brought them back during her quest to restore the White House. Kennedy worked with a French designer to reproduce missing items, including recreating the fabric through French textile firm Tassinari and Châtel.

The Marcrons will also receive from the Trumps a special photo album upon their departure, with pictures of their visit, as well as a Tiffany & Co. silver bowl, engraved with the presidential seal and the signatures of both Trumps.

The first lady has often sought to highlight history as she puts her stamp on White House events, say those familiar with her process.

Despite her willingness to buck precedent — arriving solo to Trump’s State of the Union address, for example — a person familiar with Melania Trump’s work in the White House said protocol is paramount, as is preserving tradition. That thoughtfulness is being reciprocated by the Macrons, as CNN has learned the Trumps will be gifted a four-and-a-half-foot tall European sessile oak sapling that will be planted in Belleau Wood, in Aisne, France, site of a landmark World War I battle in June 1918, where nearly 10,000 US Marines and Army soldiers were killed or wounded.

So confident was Trump about her ability to handle something like a state dinner, with its myriad details, that the first lady would not hire an event planner to help, as previous first ladies have done in the past to manage the grandeur and spectacle.

For example, the final state dinner of the Obama administration, its 14th, was a tented affair for former Italian Prime Minister Matteo Renzi, held on the South Lawn of the White House for 400 guests. Michelle Obama wore a custom, chainmail Atelier Versace gown; Mario Batali cooked, and Gwen Stefani entertained.

For the Trump administration’s first state dinner, there will be none of that. There will also be none of the paparazzi element that has come with past state dinners; celebrity supporters of the President are harder to come by than they were for Obama.

“A smaller, more elegant event allows a guest to have a more personal experience, and that is very important to Mrs. Trump,” said Grisham, who confirmed the dinner will take place in the State Dining Room, which can hold about 100-150 seated guests.

“[The first lady] has a background in design, which played a major role in the décor throughout the State floor,” Grisham adds of Trump’s hands-on approach. “She has been very focused on the experience of the guests, and wants to ensure they are able to truly enjoy and remember the occasion. When you are invited to a dinner at the White House, it is very special to be able to sit in the State Dining Room. After all, this is the People’s house, which is rich with history and tradition.”

Current White House social secretary Rickie Niceta told CNN that Trump was aware the selection of the State Dining Room would limit the number of invitations, which could fuel criticism, but Trump “held firm” to the idea.”

Niceta added that part of her job on behalf of the first lady is to make sure guests “feel special and welcome from the moment they arrived to how they will be bid ‘goodnight.”

One person who didn’t give input on the night is the President.

“The President has been busy with his schedule. The first lady took all preparations for the state dinner under her own wing,” said Grisham.

Mrs. Trump has also been doing some homework, educating herself about the protocol and history of these sorts of White House events. This is to ensure her selections for the Macrons’ visit have meaning behind them, down to the china, flowers, color scheme and menu, which, while American, will highlight the influence France has had on American cuisine.

“Mrs. Trump selected every item and every detail for the dinner, from the entrée to the chair cushions,” said Niceta.

It’s an indicator that the first lady, who moved to Washington full time only last June, seems to have gotten the hang of running an operation as massive as the White House.

“She has a solid grasp on all of her roles, which include mother, wife and first lady of the United States, both public-facing with events and engagements and behind-the-scenes with the renovations and preservation efforts at the White House,” Grisham said.

Melania’s team is “small, but mighty”

Trump has amassed a staff that has yet to experience the massive turnover happening in the West Wing. Stories of palace intrigue and heads on the chopping block don’t emanate from the East Wing.

“We are a close-knit team,” said Grisham.

They have lost at least three members — two operations and advance directors, and Stephanie Winston Wolkoff, a former Manhattan-based senior adviser to Trump. The first lady unceremoniously cut ties with Wolkoff in February after it was revealed Wolkoff’s events firm received more than $26 million for the work it did for the inauguration, a job unrelated to her duties for the first lady.

“We are close-knit, we laugh lot,” Niceta adds. “We are family.”

As a boss, Trump is regarded as a straight shooter and is well liked by executive residence staff, a source with knowledge of the matter told CNN. Trump hasn’t had the same level of public drama as her husband, whose West Wing hiring and firing foibles are frequently dissected by the media.

Of course, considering the barrage of salacious headlines surrounding the President and his alleged affairs, it is somewhat understandable the first lady isn’t particularly eager to make herself more accessible to the public — something her predecessor, Michelle Obama, did with expertise.

It is a delicate push and pull, the role of first lady.

While undefined and unsalaried, it is still expected that the American people feel a connection to the partner of their leader, and a very private woman like Trump, unskilled and unfamiliar in the shoes of political spousehood, is still learning those ropes.

“She does value her privacy and that of her family, which is to be expected” said Grisham, who adds she doesn’t let it interfere with her work.

There has even been a rampant rumor circulating for months in the power circles of Washington that Trump might be spending time in a home rented by her parents in a ritzy suburb in order to avoid life inside the White House bubble.

Grisham adamantly denies the gossip, and the house. “No such place exists,” she said.

As for the stories that spew like water from a fire hose about chaos in the West Wing, alleged affairs, payoffs and investigations, Trump has chosen not to comment. And just as we’ve learned that she opted out of a South Lawn walk or Marine One ride with her husband in order to take her own separate motorcade — and what that might mean — the first couple was spotted on a date night on the patio of Mar-a-Lago, or at Trump’s eponymous Washington hotel.

The dynamics of her marriage remain a mystery, but Grisham said Trump’s own independent streak has provided strength in the face of so much judgment.

“She is accustomed to being in the headlines and recognizes the scrutiny that comes with it,” she said.