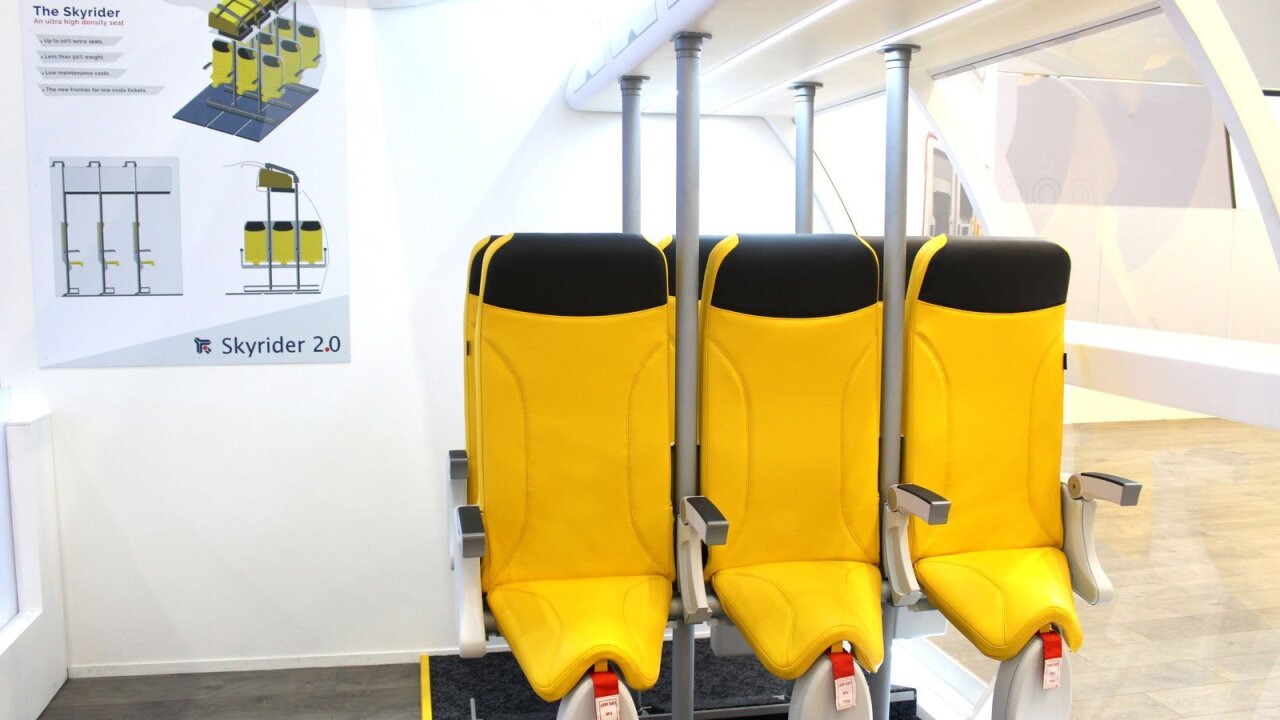 Italian seat manufacturer Aviointeriors has come up with a design that allows passengers to stretch their legs as much as they want without any extra cost.

Italian seat manufacturer Aviointeriors has come up with a design that allows passengers to stretch their legs as much as they want without any extra cost.

Fed up with limited leg room onboard airline cabins?

Italian seat manufacturer Aviointeriors has come up with a design that allows passengers to stretch their legs as much as they want when they travel without any extra cost.

The catch? The seats are so far upright that they’ll be pretty much standing up.

Unveiled at the Aircraft Interiors Expo 2018 in Hamburg, the SkyRider 2.0 aims to help airlines squeeze in more passengers by allowing an “ultra-high density” and reducing the space between rows.

It’s a new and improved version of a design the manufacturer revealed in 2010 but failed to get off the ground.

The original Skyrider, which was was not approved by the US Federal Aviation Administration, was designed in the style of a horse saddle.

Aviointeriors compared the seating position to that of a horseback rider, pointing out that cowboys can sit on saddles for hours without feeling uncomfortable.

The revised seats have extra padding, as well as poles to connect each row from the ceiling to the cabin floor.

According to Aviointeriors, the SkyRider 2.0 “ensures an increased upright passenger position, allowing installation of the seat at a reduced pitch, while maintaining an adequate comfort.”

While it remains to be seen whether Aviointeriors’ definition of “adequate comfort” matches the average person’s, the company stresses that the seats, designed for short haul flights, have many benefits.

“The design of this seat enables to increase the passenger number by 20% allowing increasing profits for airline companies,” says a spokesperson for Aviointeriors.

Will it take off?

The concept of vertical seats has been floating around for nearly two decades.

Airbus proposed the idea of standing room flights as early as 2003 and in 2010, Ryanair’s CEO Michael O’Leary announced that he was considering introducing special standing-room only areas of his airplanes.

But the airline seems to have abandoned the idea for the time being.

“We have no plans to trial or introduce standing flights,” a spokesperson told CNN last year.

While Aviointeriors has dubbed the Skyrider 2.0 “the new frontier of low cost tickets and passenger experience,” aircraft specialists have pointed out various stumbling blocks ranging from potential evacuation delays due to limited space and the fact that there is no room under the seats for personal items.

The innovative seat is yet to be snapped up by an airline.