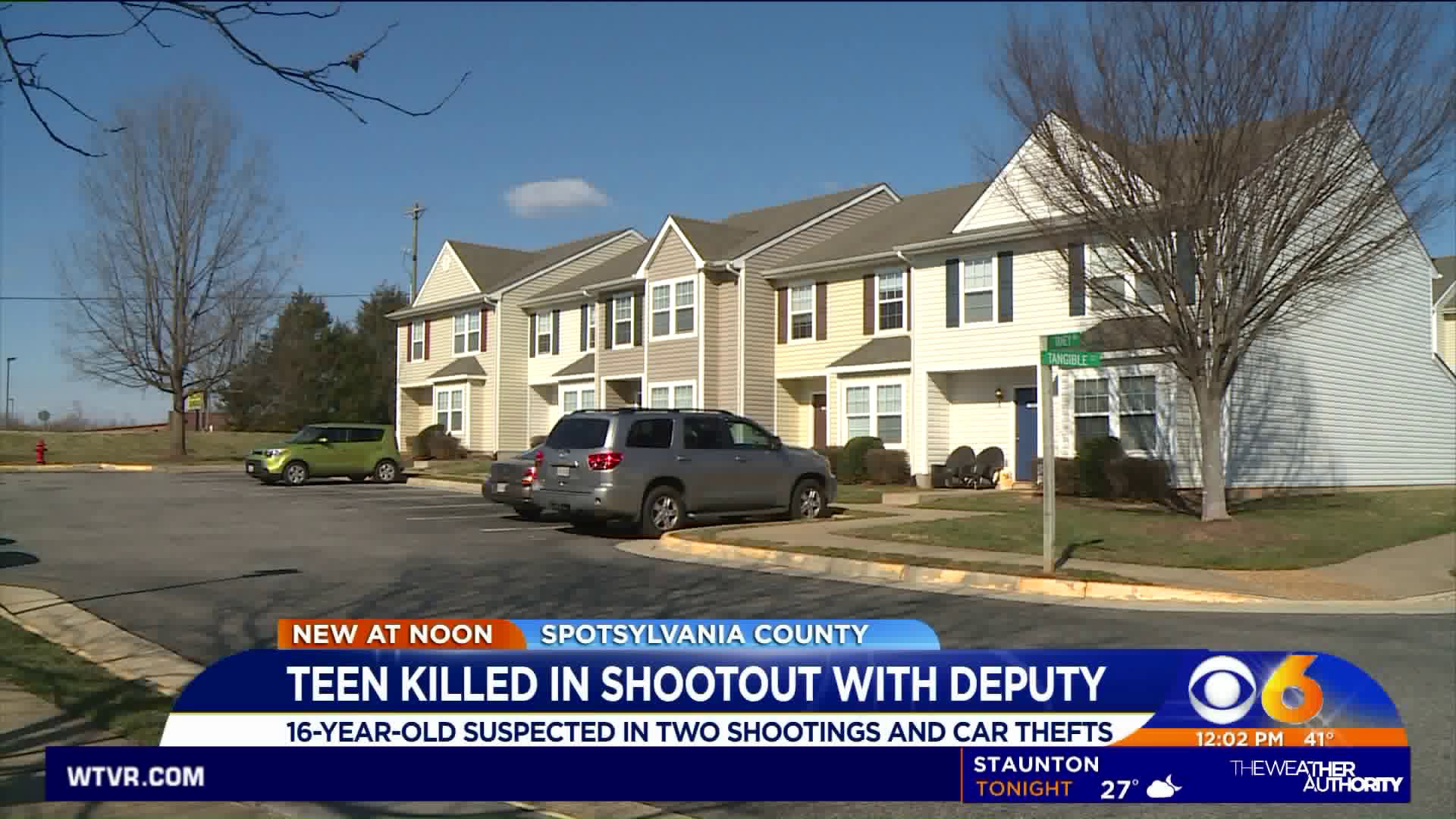 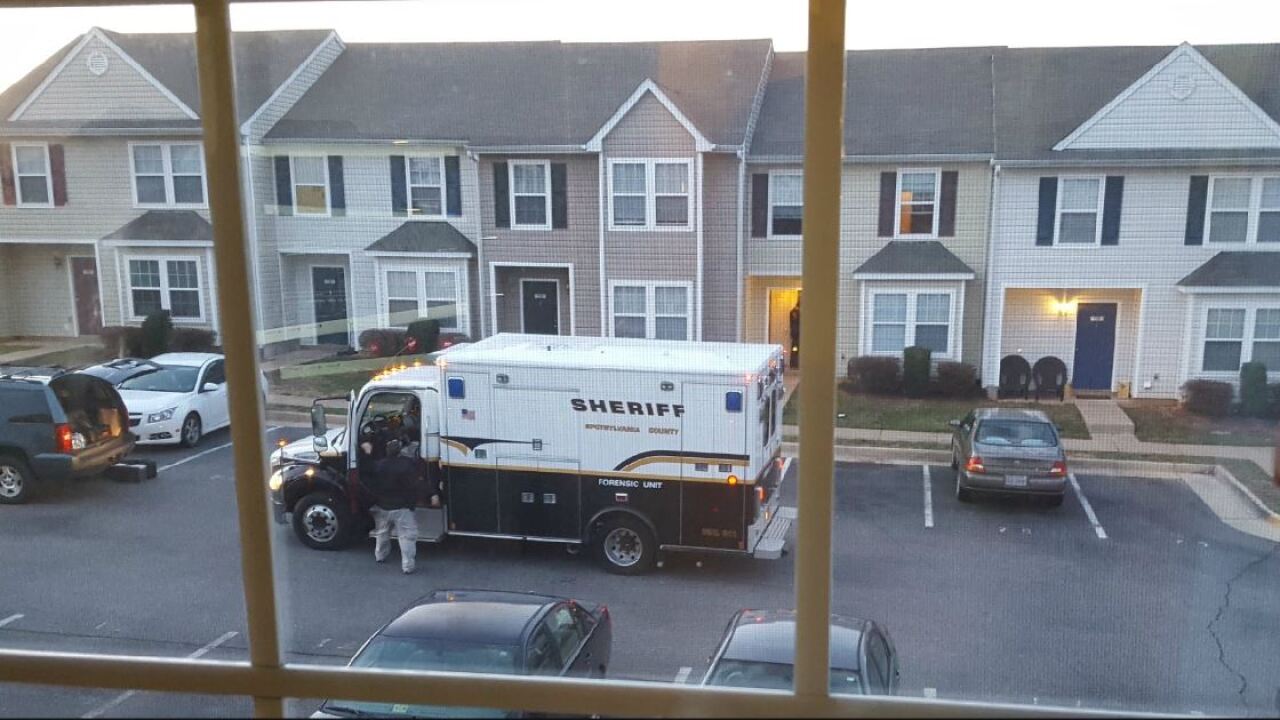 SPOTSYLVANIA COUNTY, Va. -- A teenage suspect was killed in a shootout with a Spotsylvania Sheriff's Deputy, Sheriff Roger Harris said during a Friday morning briefing.

The teenager, whose name has not yet been released, was a person of interest in two reported drive-by shootings and two car thefts.

When deputies discovered one of the stolen cars parked outside a town home in the Salem Fields Community, the sheriff said his deputies made contact with the teenager -- who was inside the town home.

"The officers observed that he had a firearm in his hand," said Sheriff Harris. "Several commands were given for him to drop the firearm."

Initially, the teenager dropped the gun, according to the sheriff's office.

"But as the officers began to approach him, he grabbed the gun and motioned toward the officers," said Harris. "Preliminary findings show that gunfire was exchanged between an officer and suspect. The suspect was struck several times."

Despite officers' attempts to save the suspect, he died at the hospital.

The deceased suspect was reported to be a runaway teen out of New Jersey.

The officer, a 16-year veteran with the Spotsylvania Sheriff's Office, was placed on administrative leave pending the outcome of the investigation.

Lee Roark, who lives on Tangible Court, said he was making lunch for his son next door when he first spotted police.

"I noticed the plain clothes officers walking around the house," Roark recounted. "It took 45 minutes to an hour from when police finally went into the house. That's when the craziness happened."

Roark reported hearing three to four loud noises followed by a rush of extra officers. Photos he took from his window showed paramedics pushing the wounded teen on a stretcher to an ambulance.

"They worked on him in the ambulance for a little while," he said.

The family that lived in the townhouse where the shooting happened moved in less than a year ago, according to neighbors. No one was home when CBS 6 stopped by Friday morning.

The sheriff's office provided the following details about the events that led up to the shooting:

On March 4, 2018 at approximately 11:15 p.m., Deputies responded to the 10800 block of Cedar Post Lane in reference to a reported drive by shooting into an occupied home. There were no injuries during this incident, only property damage. Witnesses stated that a Black Volkswagen with dark tinted windows drove by and fired several shots in the direction of the home.

On March 5, 2018 at approximately 11:30 p.m., Deputies responded to the same residence for another reported drive by shooting in the occupied home. Detectives were able to locate a .45 Caliber cartridge casing on the ground. No injuries occurred during this incident, only property damage.

Members of the Sheriff’s office Criminal Investigations Division began working on these incidents immediately. It was discovered that there was a previous Breaking and Entering reported at this residence earlier this year, where a .45 Caliber Handgun was stolen. Detectives began to follow up on a tip in reference to a suspect who may have been involved in the previous B&E. Detectives were able to find out that he was entered into a national database on March 03, 2018 as a runaway in New Jersey. It was also reported that he had stolen a Black Volkswagen.

They were able to trace the suspect’s whereabouts to the area of the Salem Fields Community. While patrolling through the area the stolen white BMW was located in the parking lot of the townhomes. The suspect was tracked to a townhome, near the area where the white BMW was parked. The officers were able to make contact with him inside the residence. The officers observed that he had a firearm in his hand. Several commands were given for him to drop the firearm. He initially complied and placed the gun down, but as the officers began to approach him- He grabbed the gun and motioned toward the officers. Preliminary findings show that gunfire was exchanged between an officer and the suspect. The suspect was struck several times and then the officers immediately made life saving attempts on him until Medic units were able to arrive on scene. He was transported to a local hospital where he later succumb to his injuries. No officers or other citizens were harmed during this incident.

The officer, who is a 16 year veteran with the office, has been placed on routine administrative leave pending the investigation.

Watch CBS 6 News at Noon for a live update from Spotsylvania.