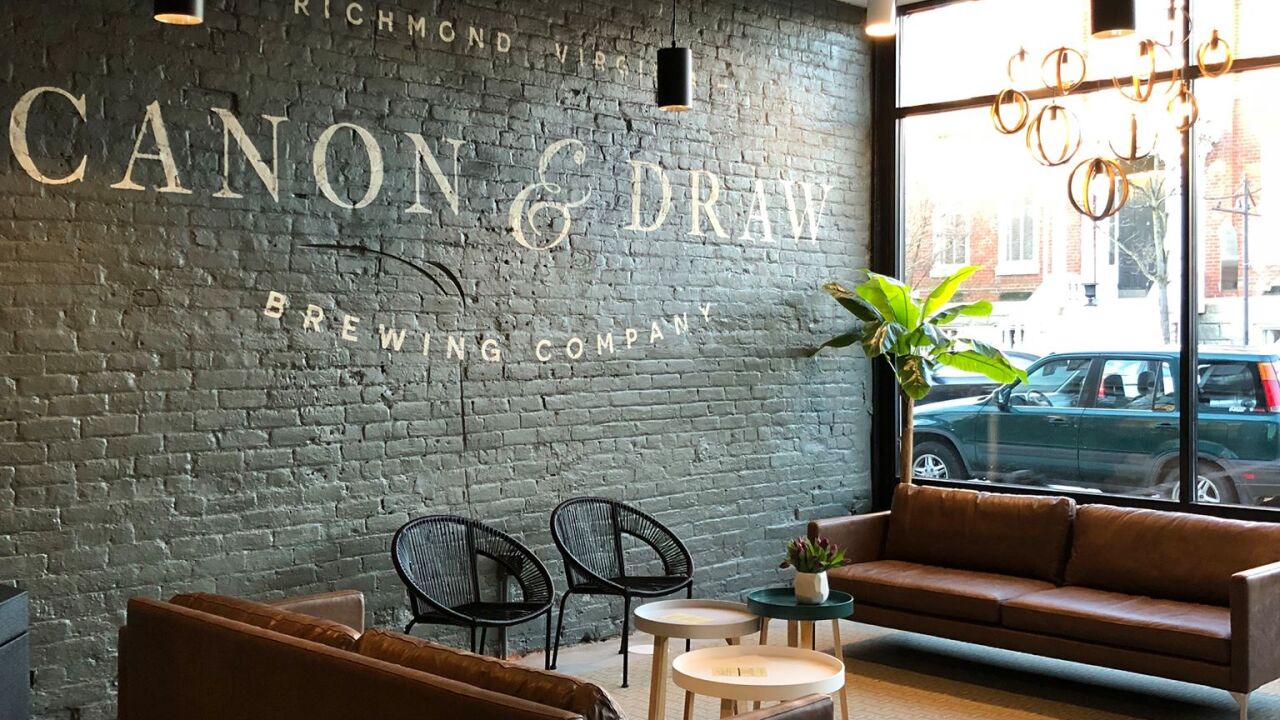 RICHMOND, Va. — Starting at high noon Saturday, March 10, Canon & Draw Brewery will celebrate its grand opening  at 1529 Main Street in the Fan. The brewery is run by the Cooper family, who founded Steam Bell Beer Works in Chesterfield in 2016.

Brad Cooper, who opened Steam Bell after losing his mining job, said they happened along the location at 1529 Main Street, near the Virginia Commonwealth University Monroe Park Campus, during a search around the area which also included Brookland Park and South Richmond neighborhoods.

“We fell in love with it,” he said of the building that has sat empty for years – downstairs, at least.

Renovations of the 5,000-square-foot space delayed the opening, which was originally planned for summer last year. Blackwood Development used historic tax credits to renovate the former Eclipse Linen Service and Laundromat, which has 16 apartments upstairs over the commercial space.

“Canon & Draw is an opportunity for us to create a brand that is a perfect fit for the area,” said Brittany Cooper, who moved back to Richmond to help her brother with the marketing side of Steam Bell, and who stayed on as a partner while continuing to work remotely at her IBM gig in New York.

Canon & Draw will have a partition dividing the tasting room area for private events. (Mike Platania of RichmondBizSense)

“It’s really a completely a different concept,” she added. “It will be higher end, with leather couches and darker wood – cool, eclectic, old Southern atmosphere.”

Canon & Draw or C/D will be open six days a week and have over 10 taps for smaller batch, experimental varieties. Cooper will use a seven-barrel brewing system, and seven-barrel fermenters.

Some of the beers available on opening day will be DIPA, saison, gose, stout, Hefeweizen, barley wine, and the River City Tap Water, their take on a merging of the American Lager.

Collectible grand opening, enamel pins will be given away to the first 100 customers, starting at noon.

The Fan area is surprisingly void of any craft breweries, though plenty of bars and restaurants are nearby. Garden Grove in Carytown is over 1.5 miles away, and in the other direction, Triple Crossing is over a mile away on Foushee.

Things continue to take shape for a family who name is rooted in the craft itself. Traditionally, a cooper’s work included assembly of casks and barrels. A steam bell is used to cover a barrel and helps ply the wood into shape.

Building upon that branding, canon is French for barrel (though related more to artillery), and a drawknife is used to shape hoops for barrels. And their craft soda line is called Trussing Craft Fizz, as a nod to the initiation ceremony that all cooper apprentices go through to become a journeyman. Look for flagship flavors like mint/tea and ginger/lime, along with seasonal varieties like apple/sage and blueberry/basil.

There are close to 30 breweries in the Richmond-metro, with more opening this year, but the Coopers see room for more, and aren’t worried about the brewery boom going flat.

“I believe there is, especially with the rise of the tasting room,” Brittany said. “But with distribution, there is only so much shelf space.”

Right out of the gate, Brad said he hit the goal he had proposed in his original business plan; he had originally planned to scale up production over the years.

“We were getting a lot of support, so we put our heads down — we knew what we wanted to do the next few years — and went aggressively for it,” Brittany said. “In the first six months we released 40 different beers — we never dreamed we would do that.”