How these homeless dogs are giving inmates ‘new purpose in life’ 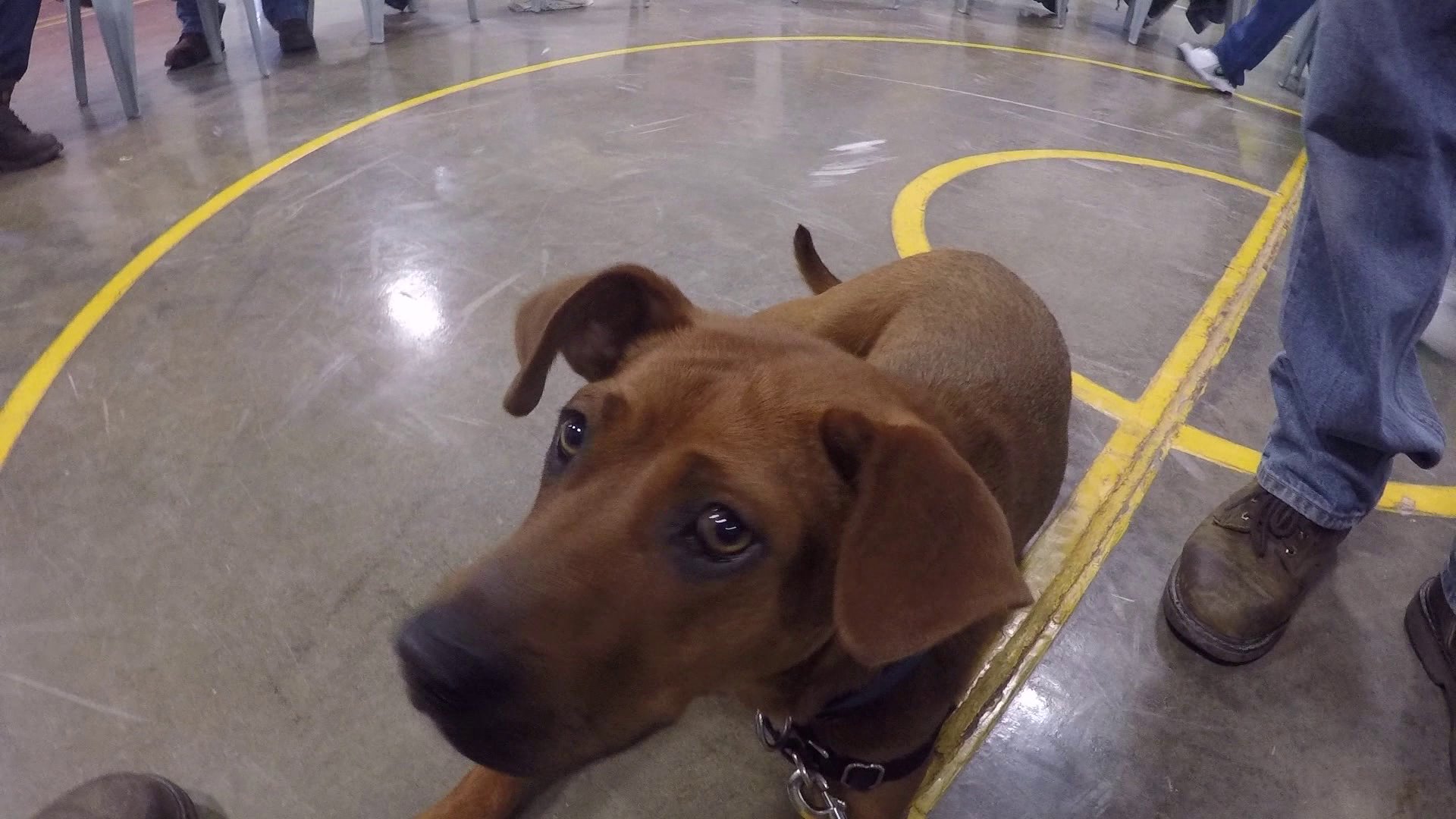 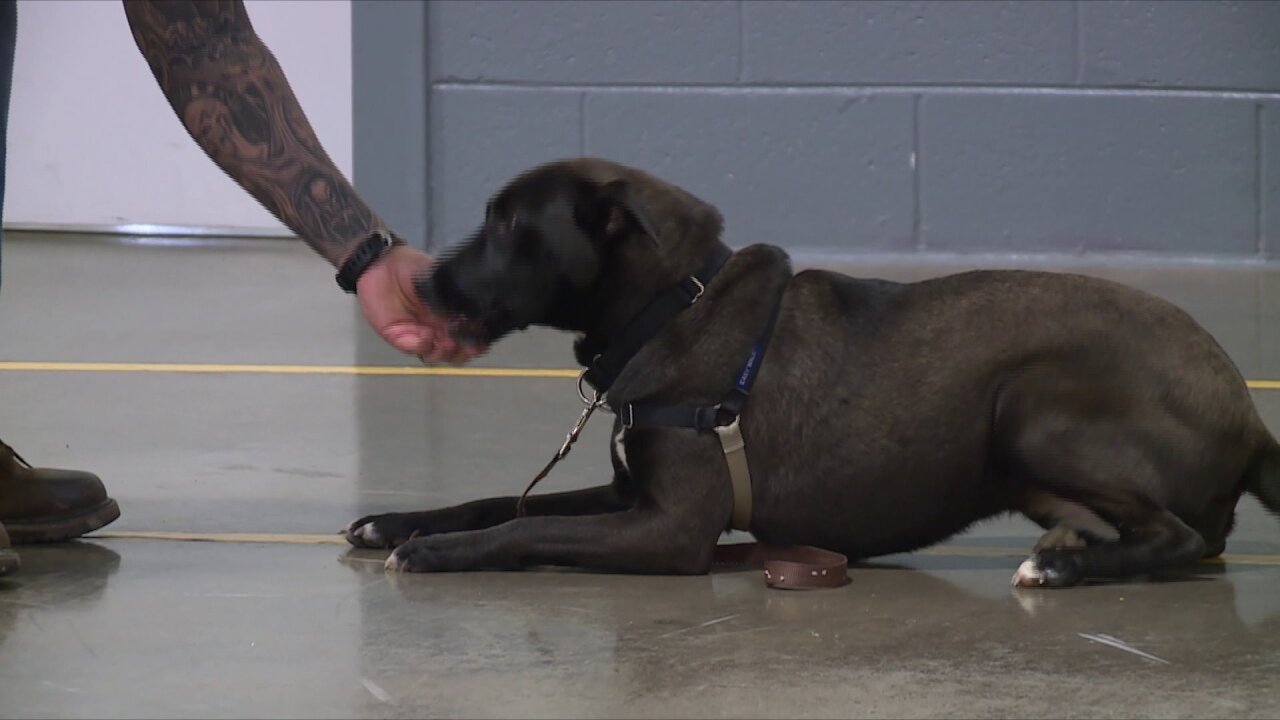 LUNENBURG COUNTY, Va. -- You don't often hear of celebration happening inside a prison, but a group of inmates at the Lunenburg Correctional Center is celebrating a special milestone.

As of this week, 50 dogs have been adopted through Fetch a Cure's Pixie's Pen Pals since June 2016. That's when Counselor Kristal Winstead became the program's liaison at the prison.

"It softens people, I mean how could you look at that little face and those big brown eyes and not ease up a little," she said.

Many of the prisoners have been sentenced to serve decades behind bars for a variety of crimes.

"The prison environment in general, it can be a bit dismal," said Shaddai Omalara, who enrolled in the program nearly three years ago. "Sixteen years of being in prison, sometimes your emotions shut down."

A dozen of the men at the Lunenburg facility were selected to be part of the Pen Pals program.

"There was just a job opening and I put in an application, came to an interview. They asked me a few questions. I told them how I felt and I guess I was the best candidate at the time," said Shane Cubbage, who joined the program three years ago and has been incarcerated for 15 years.

They have to pass a series of tests and maintain a certain status at the prison, before they get paired up with a shelter dog in need of guidance.

"The traditional shelter setting is so stressful for the dogs and a lot of them just shut down. But having the chance to have all the one-on-one time and attention and the behavior training and the socialization, it brings these dogs out of their shells," Fetch a Cure Pen Pals program manager Emily Clanton said.

It's a rare kind of rehabilitation for both man and beast.

"I requested to come to this institution specifically for this program here," Omalara said.

"This is a completely rewarding experience," said Michael Ingram, who is about halfway through serving his 20-year sentence. "I mean we get to have a new purpose in life training these dogs."

Tamale, Silverbell, and Tennessee are three of the six dogs currently living inside the Lunenburg prison.

"They get to live with us in the cells," Omalara said. "They live in their own little cage, but a lot of times we like to let them come out and interact with us."

Each canine shares a small cell with its primary handler and secondary handler, which can get a bit cramped.

"The kennel does take up a lot of space, but you learn to maneuver pretty well," Cubbage said.

Though the setup can be a tight squeeze, the handlers say the close quarters are crucial.

"We get to work on training in the cell. We get to interact with them 24 hours a day. It's such a beautiful thing," said Omalara.

Coordinators of the Pen Pals program say the training takes a lot of dedication.

"We had one here named Rusty that had seizures and one of the handlers would actually have to hold Rusty until the seizure subsided and the other handler would have to time it," Winstead said. "I mean to me that’s phenomenal."

The prisoners and pups also meet with Fetch a Cure trainers once a week as part of the program.

During the meetings, the teams show off what they have accomplished and set goals for how to move forward with training.

"It gives them a sense of responsibility and self worth, I mean some of them have been locked up since they were 17 or 18 years old, so they've grown up in prison," said Winstead.

The trainers use the Canine Good Citizen program, recognized as the gold standard for dog behavior, to assess whether the pups are ready to be adopted. The evaluation consists of 10 objectives including coming when called, sitting and lying down on command, accepting a friendly stranger, and reacting appropriately to another dog.

"They call him bulletproof. That’s a nickname for him. They use him for therapy dogs as far as other dogs," said Kevin Green about his walker hound partner, Tennessee. Green was first chosen for the Pen Pals program at Lunenburg in 2010.

The test can take weeks and sometimes months to pass, depending on the dog. A lab mix named Lucky Duck just found her forever home this week, after spending 10 months with her handlers at the prison.

"They might have been trash to somebody else but they end up being a treasure to somebody, you know another family," Winstead said. "This is a second chance for them and I’ve always said that. Just like these guys get their second chance, these dogs are getting a second chance,"

Some of the inmates say they can connect on a deeper level with the dogs because of their backgrounds.

"They come from broken homes. They may have been stray dogs and a lot of the experiences these dogs went through, we can kind of relate to that," said Omalara.

"A lot of these dogs come from very very bad situations, hoarding situations. You wouldn’t believe how many people just say I don’t want them anymore," Winstead said.

The prisoners say it can definitely be hard to see their four-legged companions move on, after they've transformed from a shelter dog to man's best friend.

"He looked back with his big bug eyes like what are you doing to me," Cubbage said.

"In prison, we try to be macho and stuff like that but when you see them leave, we definitely get a bit emotional," said Omalara.

But giving the dogs a new lease on life helps the inmates find their own.

"That's the most rewarding experience for us, to see a dog get a second chance in life," Omalara said.

Winstead has also created a scrapbook called the "Happy Tail Book" with updates on the dogs in their forever homes.

All families interested in adopting the dogs come to the Lunenburg Correctional Center for a meet-and-greet. Inmates say they love that part of the process because they can see the impact of their hard work.

"It feels so good to be able to give back to the community and give back to people," Green said. "I see a lot of the families when they come up here, how grateful they are, and how pleased they really are to have one of these dogs."
​
​Silverbell got to go home with her new family on Thursday. A family stopped and fell in love with Tennessee in his first week at the prison, but he will be staying for a full month of training before he is officially adopted.

Two new shelter dogs will be rotated into the program and brought to Lunenburg Correctional Center by the end of the week.

Click here for a list of adoptable dogs through the Pen Pals program. If you're interested in moving forward, you can call 804-525-2193 or send an email to emily@fetchacure.com