Democrat delegate apologizes after he mocks peer with Communist image 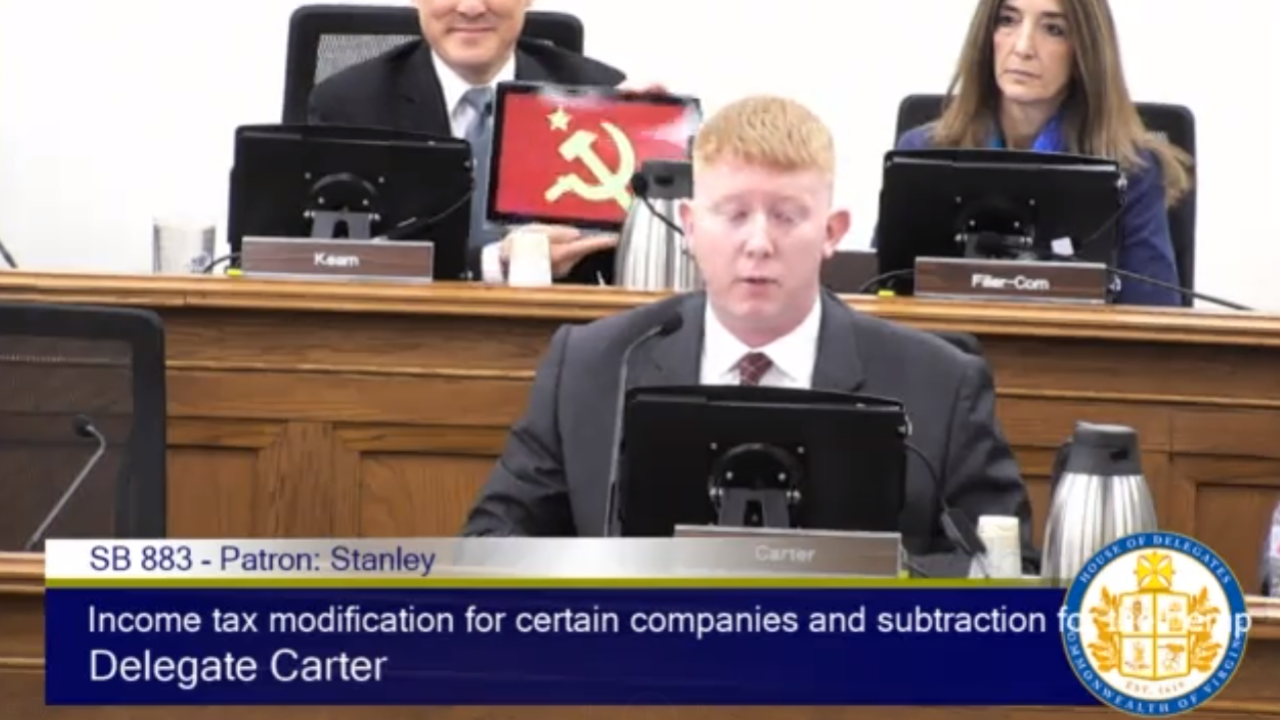 Delegate Mark L. Keam (D-Fairfax County) violated House Rule 57 when he held up an image of a hammer and sickle while another delegate spoke.

RICHMOND, Va. – A fellow delegate mocked Delegate Lee J. Carter (D-Prince William County) with the image of a hammer and sickle held up behind his head as Carter spoke against SB 883 in finance committee Monday, expressing a preference that economic development be built from the ground up instead of offering companies tax breaks at the expense of poor people in certain Virginia localities.

Voters easily put Carter, a Democratic Socialist, into office in District 50. Like Senator Bernie Sanders, Carter ran as a Democrat but is a self-described socialist, in a district where Hillary Clinton easily beat President Donald Trump in 2016.

Delegate Carter also voted against the House version of the bill. He said Monday that his concerns had not gone away with SB 883, and called it a “very deeply flawed mechanism” that slashes the tax code and leaves Virginians “fighting over scraps and handouts from billionaires, rather than trying to build the economy from the ground up that will actually help the people that are already here.”

As he expressed that viewpoint, Delegate Mark L. Keam (D-Fairfax County) began to laugh behind Carter. He then picked up his tablet and began searching for an image while Carter continued to speak against the bill.

“In my district we’ve got entire low-income neighborhoods where we are having to fight the bulldozers because we’ve got out of state money that is trying to come in and buy up property people are living on right now and kicking them out,” he continued.

Right about this moment, Keam readied the image he found of a hammer and sickle, and briefly flashed it behind Carter’s head as the delegate continued to speak against the bill.

Delegate Mark L. Keam (D-Fairfax County) violated House Rule 57 when he held up an image of a hammer and sickle while another delegate spoke.

“And, you know, it may make the locality look richer on paper, it will look like you’ve done something about poverty, but at the end of the day, if this does what has happened in Northern Virginia, what will happen in the South West (Virginia) and Southside and the Eastern shore and I think Petersburg is particularly susceptible to this, what will happen is, you won’t have any poor people in those localities...but it won’t be because you’ve helped the poor people in those localities, it’s because you’ve moved them.”

“I thank the patron for trying to do something about poverty, it’s desperately overdue, but this is not the mechanism to do it,” he finished.

After Keam flashed the image, he sat back in his chair chuckling.

Before the House adjourned Monday, Keam apologized for his actions, first by referencing a speech given last week by a Virginia Beach delegate on the need for “civility, trust, decorum, and being cordial and courteous with each other.”

“I took that to heart last week and applauded him for courage,” Keam said.

“I unfortunately failed to pass the test myself this morning, I believe I violated Rule 57 of the House rules myself, by conducting myself not in the decorum of this body by making jest of one of my colleagues in the house,” he said.

Rule 57 reads specifically, “No member shall in debate use any language or gesture calculated to wound, offend, or insult another member.”

“Even though sometimes we get overboard by laughing and having fun with each other in terms of debates, I don’t think that the House nor any of our committees should be  a place where we bring juvenile jokes like that, and so on behalf of myself with full acknowledgement of my behavior, I apologize to the body and to my good friend from Prince William County for putting him in that position and I will try my best to live up to my standards as a member of this body going forward,” Keam said.

This morning in @VaHouse Finance Committee meeting, my colleague @carterforva and I debated a tax bill. We hold divergent views on these policy issues, so I made a light-hearted visual joke about our differences. I apologize to Del. Carter for going overboard with my stupid joke.