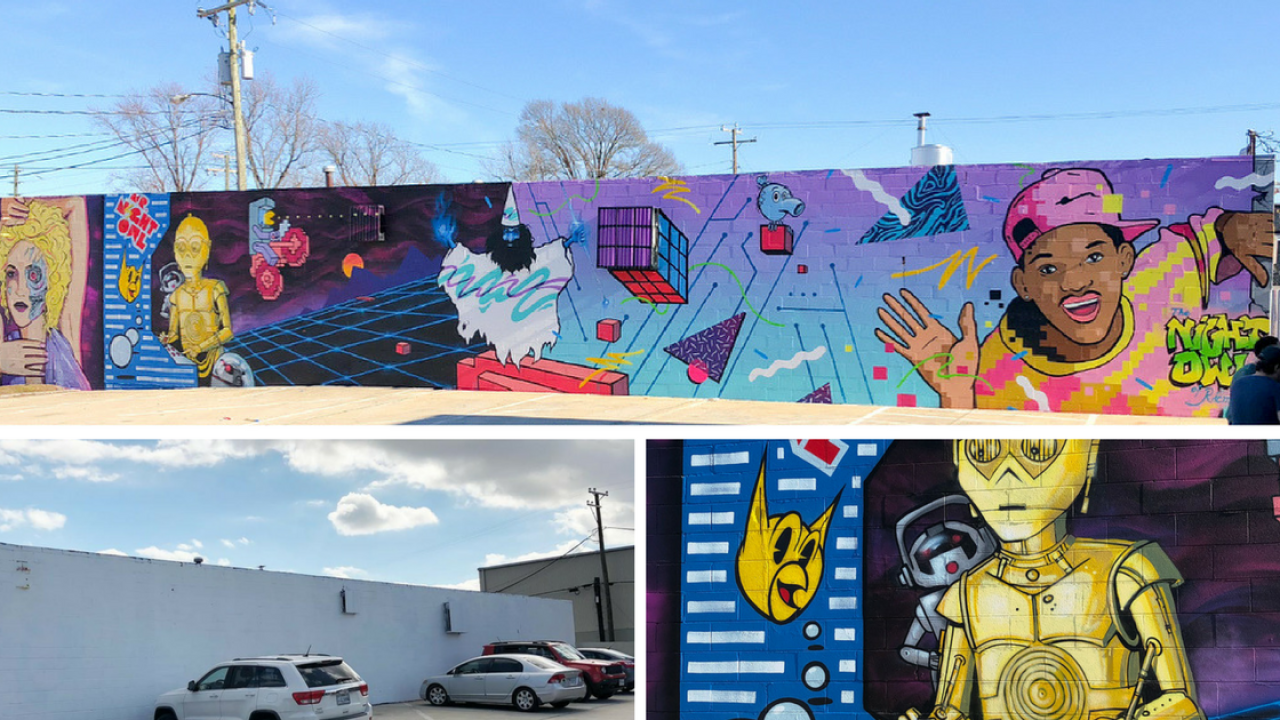 RICHMOND, Va. – While its been said that art should provoke emotions and start discussion, a mural in Scott’s Addition that was covered in white paint within days of completion has become a contentious topic.

The Circuit arcade and bar contracted artist Mickael Broth to design and paint a mural at 3105 W. Leigh Street, a separate building across the parking lot from The Circuit.

Last Sunday, Broth completed the massive design, which incorporated remixed pop culture and arcade themes. Madonna, whose face is half-Terminator, was balanced by the Fresh Prince of Bel-Air also striking a pose at the other end. The project is infused with 80s and 90s characters: Excitebike blasts over a Tron landscape, Q*bert rocks a top knot, C3PO plays an arcade game, and more.

But by Wednesday morning, the splashes of color turned white, and the conversation darkened. Each business owner maintains a different version of events.

Property manager Henry Briggs said that the building, which is actually 3103 and 3105 B. Leigh St., is occupied by a welder and by long-time tenant Brandon Pearson. Pearson said he has operated his furniture shop out of 3103 for four years and has a 12-year lease on the building. He will open his upscale, fine dining restaurant Aloi in the spring.

Both Briggs and Pearson maintain that Robert Lupica, who owns The Circuit, did not have permission to paint the mural. They both said that Lupica contacted Briggs in the fall and asked to paint the wall white and then paint a design onto it. Briggs said he told Lupica to send him an image of the design and that he would share it with owners and get final permission.

“That was the last conversation I had with him (about it),” Briggs said.

He also said that he was under the impression that Lupica would be painting a logo.

“His offer was ‘I will paint it white for you and paint my sign on it,’” Briggs said. “In no way did I ever envision a wall to wall, ceiling high mural.”

Lupica said he did have further contact with Briggs, and even sent him a design and then painted the wall white to prep for the eventual mural.

Lupica declined to share with a reporter the email he said he sent Briggs with the proposed design. He was invited to share it at anytime going forward, and the story would be updated to reflect that.

Lupica said he called Briggs and was told the email went to his spam box but then Briggs made a verbal agreement that Lupica could proceed with the proposed design. Lupica said he pressed Briggs for a written agreement but never got one.

“I did take that chance, will he back me up or not, but there was no problem (with neighbors),” Lupica said.

“You can’t paint someone’s wall without an okay,” Lupica said.

“He just took it upon himself to paint someone else’s business,” Pearson said. “By no means did anyone have permission to do that wall.”

Lupica insists that Pearson may seem to have been caught off guard by the design, but that Pearson had seen a rendering of it and they had talked about it many times over the past few months.

“We talked about it many times,” he said. “I was going to let him use parking places; we had a good relationship.”

Lupica reached out to Briggs to see if they could work something out, but by Wednesday it was painted over.

Pearson has already contracted another muralist Brad Bacon to do a full wrap of the building. He said he has permission from Briggs, though Briggs seemed unsure about the full details during a phone interview.

“I already commissioned another artist,” Pearson said. “It doesn’t matter if I liked the art work or not (by Broth), I would have taken it down.”

“These people have no right,” he said.

Pearson is frustrated by what he considers a social media smear campaign of his businesses and by the allegation that he doesn’t support local art.

“I feature artists inside (and outside) my building (s),” he said. “I am a sponsor of RVA Mural Art fest.”

“It just hurts my heart and I’m sad about it,” Lupica said of the controversy. “The artist was really upset.”

Broth declined to comment beyond a statement explaining that he was commissioned and paid on schedule after he completed the work.

“I had the right to do it,” Lupica said. “I would like to get my money back; I would rather have the art work up.”

This is the final part of the mural I painted for @thecircuitarcadebar in @scottsaddition. None other than the Fresh Prince himself, a young Mr. @willsmith. Word is the guy opening a restaurant next door hates the mural and wants it painted over.. if you want to get your flick with Will, I’d say to do it sooner than later… #freshprinceofbelair #freshprince #willsmith #90sfashion #90spattern #muralweather #mural #streetart #rapsprays