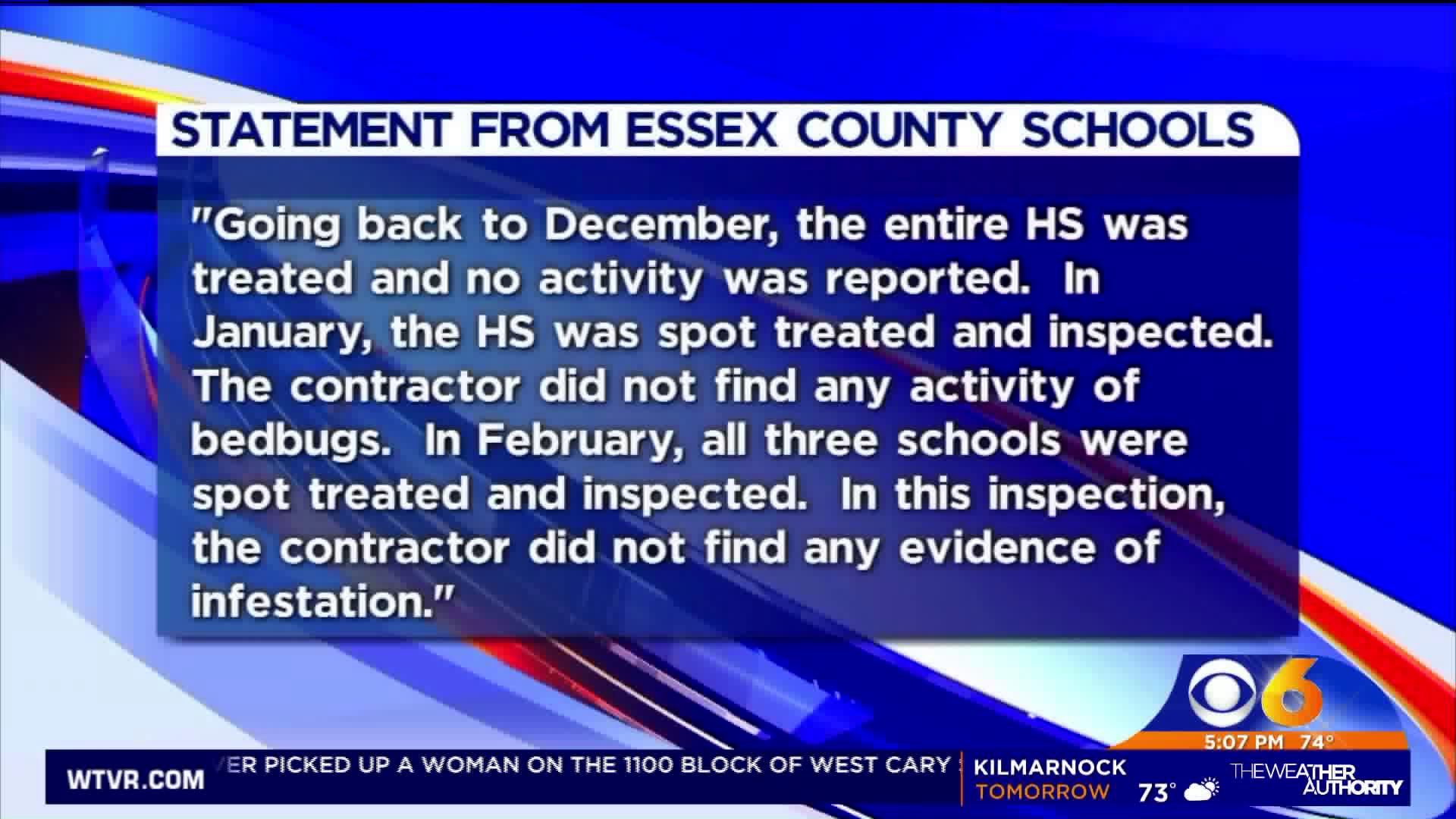 ESSEX, Va. – Essex County High School had a bedbug issue, parents said, and they feel uncertain the issue has been handled properly.

The CBS 6 Problem Solvers turned to school leaders for answers. One mom who contacted us said she was at her wits end and didn’t think the school system handled the ordeal properly.

In an interview, the upset mom didn’t want to show her face but she said she believes her daughter brought them home from
Essex County High School.

For months, that mom said there has been a buzz among parents on social media about a few instances of bedbugs at the school.

“They’re saying they think the school should have closed down for treatment, that children who have them shouldn’t come to school. They’re hoping their child doesn’t bring it home” mom explained.

She went on to tell the Problem Solvers that a few weeks ago, her daughter experienced severe itching and had to leave school early.

She said before that, she was never notified by school system officials that her child’s school had been professionally treated for bedbugs.

Mom shared pictures of what she found while checking her daughter’s bed.

“When I pulled it down, I saw two or three bugs. We literally threw out her bed, her mattress, box spring, clothes, stuffed animals and pillows. I tried to save as much as I could. Kept washing and washing and then drying. My daughter has no bed now. We had to get rid of it and I can’t put anything back in there until it gets treated,” mom said.

She doesn’t think the school system did enough to warn parents, but the Essex County Superintendent said they sent various messages to parents. There were robo calls and letters sent out.

She’s baffled as to why she didn’t receive any of those alerts.

Superintendent Scott Burckbuchler sent this statement regarding how they treated the bedbugs:

“After a couple of instances where a single bed bug was located in our school, we took proactive/preventative steps to ensure that our buildings were not the host of bedbugs. We have contracted with a licensed contractor to inspect and treat our facilities. Going back to December, the entire high school was treated and no activity was reported.In January, the high school was spot treated and inspected. The contractor did not find any activity of bedbugs. In February, all three schools were spot treated and inspected. In this inspection, the contractor did not find any evidence of infestation. Therefore, we have concluded that the bedbugs are coming into our building from elsewhere which makes sense, since schools are not usually associated with bedbug issues given the types of floors and furniture they use. The schools have sent various messages to parents alerting them to the situation.
We are sympathetic to parental concerns in regard to the cost associated with treating their homes but we do not believe it is appropriate to use educational funds, beyond the $9,500 we have already used to inspect/treat our facilities, to treat private residences."

She said most of all she just wants other parents to know the scope of the issue at the school, so they can take whatever precautions they deem necessary.