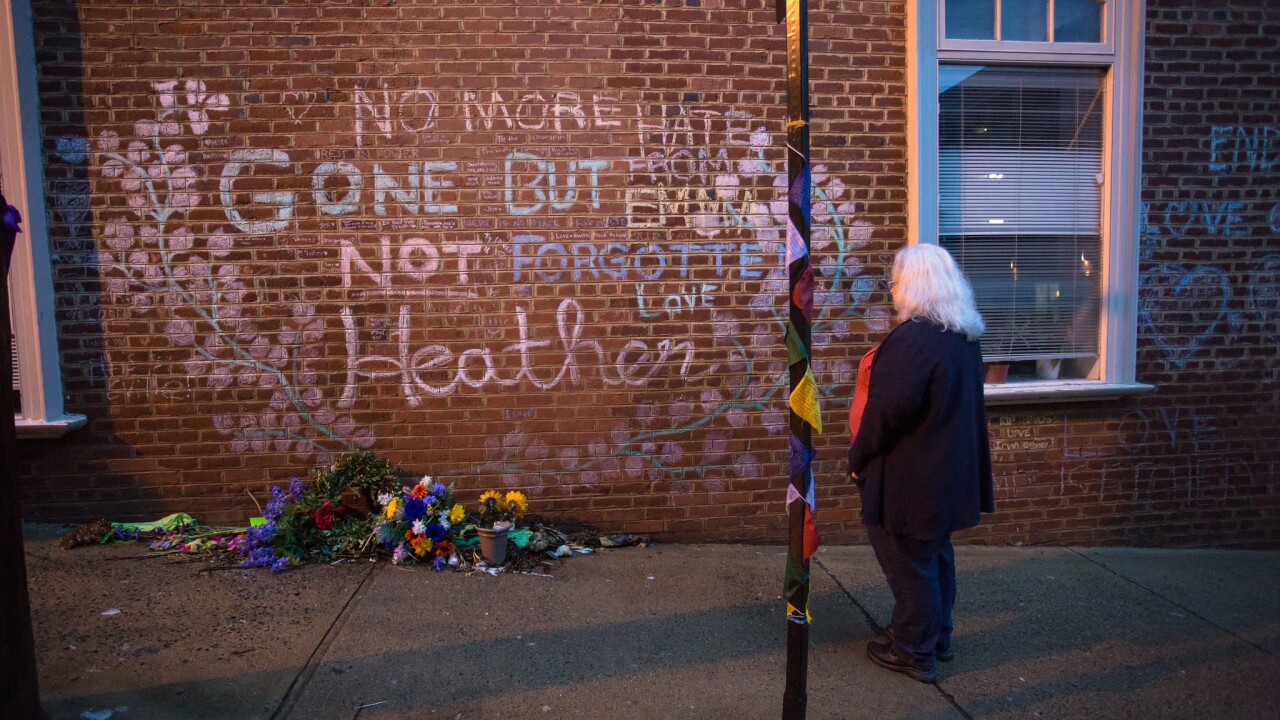 CHARLOTTESVILLE, Va. – Six months after Heather Heyer was killed protesting a neo-Nazi rally, a memorial at the site of her death is still being showered with gifts, mementos and flowers. But it has also been vandalized, according to Heyer’s mother – a reminder of the hatred that took her daughter’s life.

For many, the riot triggered by far-right protesters in Charlottesville on Aug. 12 exposed the underbelly of hatred and racism in America, and the months since then have been about coming to terms with that reality. But for Susan Bro, Heyer’s mother, the half-year has been hallmarked by efforts to promote the values Heyer stood for – and eventually died for – in Charlottesville.

“She wanted everybody treated equally and fairly. That was a lifelong passion for her,” Bro said Sunday.

Bro said she is getting used to a new lifestyle after her daughter’s death. She has had speaking engagements and preached a message of empowerment at the MTV Video Music Awards and on the Ellen DeGeneres Show. Reporters have constantly been at her door. She is working with a public relations firm and is hiring a press agent and speaker’s bureau to help her manage the demands.

She said she has been surprised that people want to hear what she has to say. But she hopes to empower them to fight prejudice and intolerance.

“It’s not about me, and it’s not really about my daughter. It’s more that people are horrified to realize how entrenched the hatred is,” Bro said. “I think that addressing people in a calm and rational manner not only reassures people but gives them a little bit of hope about how we can fix this.”

The nation is still reeling from the events of Aug. 11-12, when far-right activists gathered in Charlottesville for what they claimed was a protest opposing the removal of a Robert E. Lee statue from Emancipation Park.

It quickly devolved into mayhem when the so-called “alt-right” protesters clashed with those who showed up to oppose them. One far-right protester drove a car into a group of counterprotesters – killing Heyer, who was 32 years old, and injuring 19 others.

Immediately after Heyer’s death, one of her childhood friends started a GoFundMe crowdfunding campaign to help pay for funeral costs. When the funeral was over, the fund still had more than $200,000.

Using her daughter’s story to amplify a positive message, Bro then established the Heather Heyer Foundation, which will give scholarships to high school students.

“I said, ‘There’s no way people think we need this kind of money for the funeral itself.’ That tells me people want to be a part of whatever they feel Heather was doing,” Bro said. “I said, ‘We’ve got to do something responsible with this money.’ All this money was coming in, and I wanted to be held accountable for it.’”

The foundation will initially grant scholarships to students at Charlottesville High School and William Monroe High School, which Heyer attended, in nearby Stanardsville. Bro said ultimately the fund wants to support students and professionals nationwide in degree and certification programs that help them “further causes of non-violent social justice and equity.”

Bro said, “We’re not looking to create new advocates. We’re looking to help advocates who are already in activism to further their education.” Bro said.

In the face of it all, Bro is a mother deeply grieving the loss of her daughter.

She remembers her daughter as a young adult who was trying to be the best grown-up she could be, including working three jobs to be self-sufficient. Heyer was a paralegal and worked as a bartender and waitress in the evening.

“She was a go-getter, and I was proud of her for that,” Bro said.

Bro visited her daughter’s impromptu memorial Sunday. The street has been named “Heather Heyer Way,” and the words “no more hate” – among other messages – are written in chalk on the side of a building next to the spot.

Bro said she thinks America has made moves toward love and understanding since last summer’s violent demonstration.

“This was not a wonderful day, but I feel like we’re moving forward in the world. We’re taking this as a rallying point, and people are stepping up to the plate,” Bro said.

“A lot of white people were like, ‘Well this doesn’t really apply to me.’ And this time, it slapped them in the face and showed them this applies to everybody.”

White supremacists have not yielded in their vileness since the rally, Bro said. She has kept her daughter’s ashes in a hidden location so they won’t be tampered with by racists.

“From what I’ve learned, they crave either silence – where everybody ignores when they come to town so they feel vindicated because no one seems to care,” Bro said. “Or they crave violence, so they will pick a progressive city like Charlottesville that’s not accustomed to having a violent outburst like that.”

In some ways, the “Unite the Right” rally united the country, Heyer said, but it also further divided Americans.

“We’re trying to find ways to bridge some of that gap with difficult conversations,” Bro said. “I’ve seen people, from both sides, to work to bridge that gap. That’s been encouraging to me.”