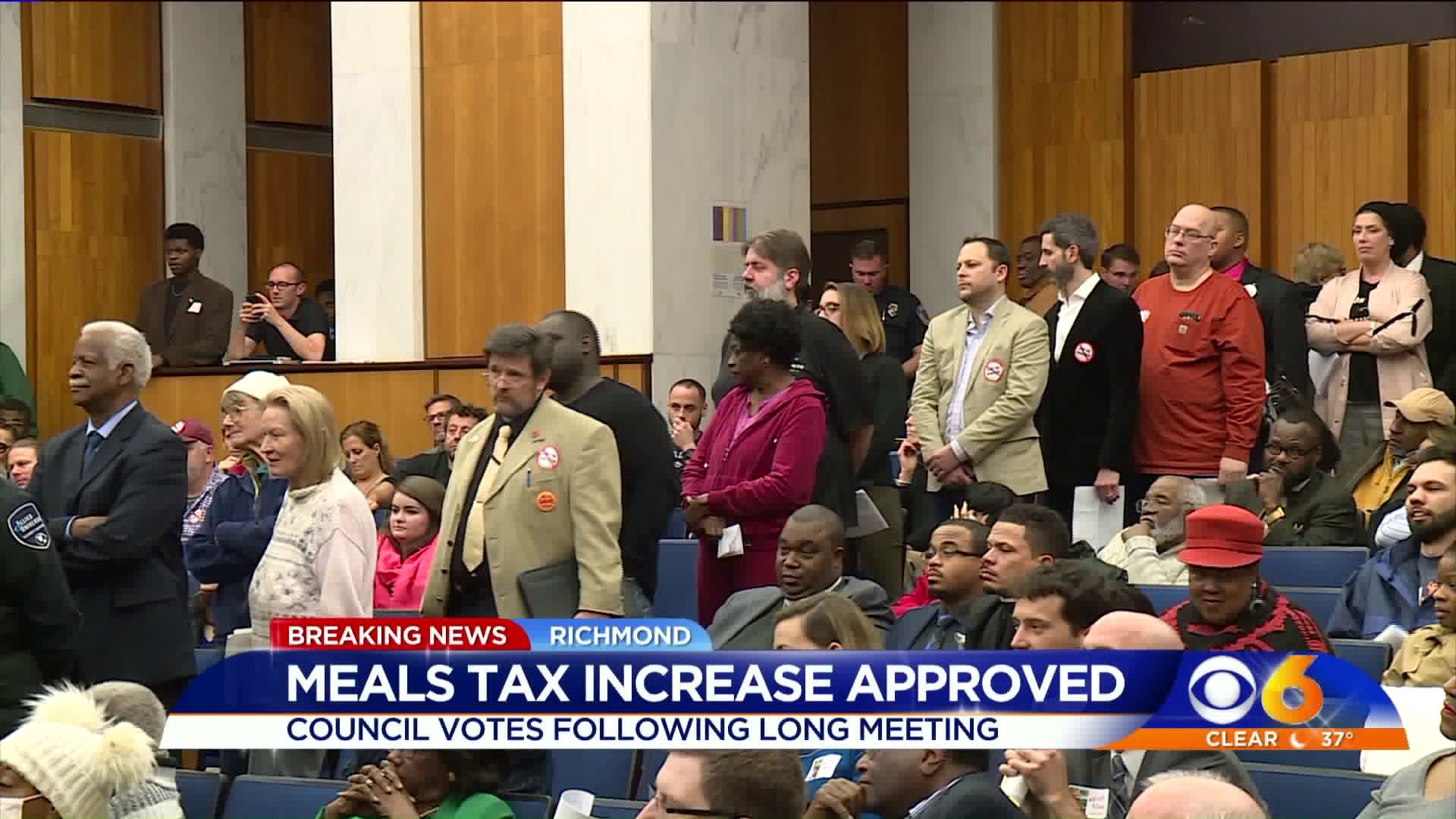 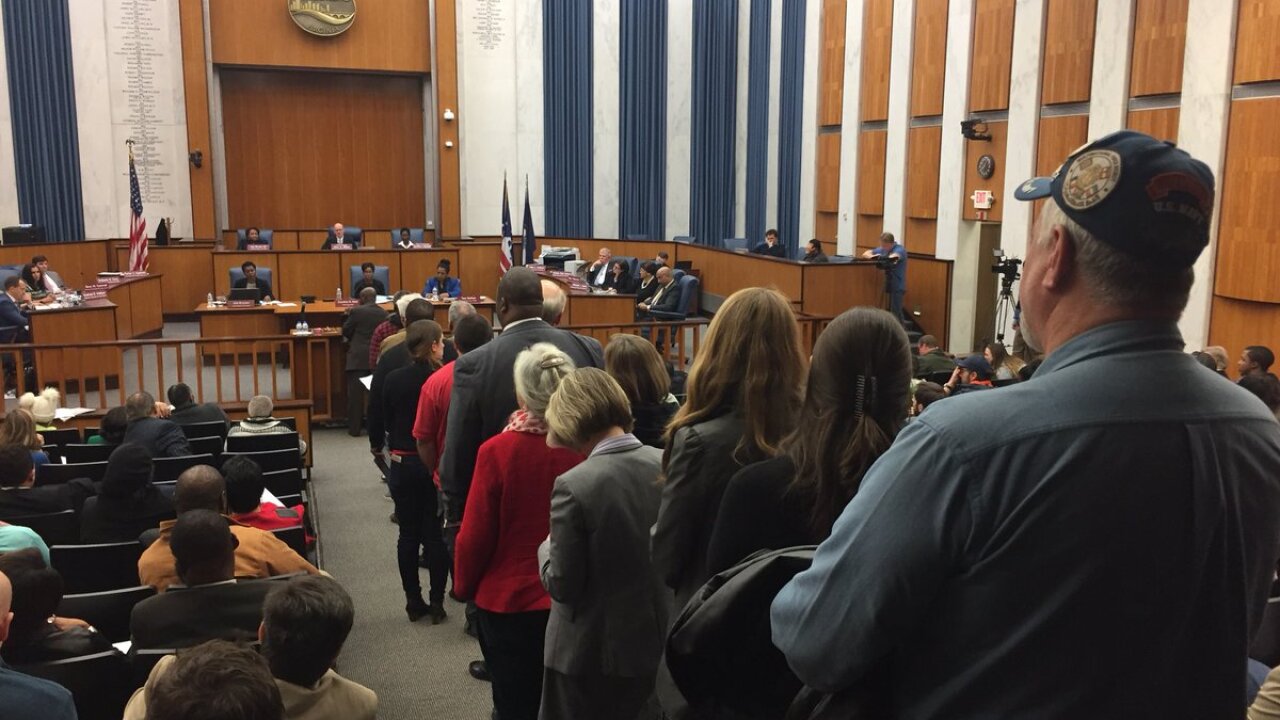 The proposal, introduced by Richmond Mayor Levar Stoney, bumps the meals tax at Richmond restaurants and catering businesses from 6 to 7.5-percent. It takes effect July 1, 2018.

Richmond City Council passed the tax by a vote of 7-2.

Larson had previously said that she wanted to defer voting for at least two weeks. During that time, she wanted Richmond City Council to consider adding a sunset clause, allowing the increase to expire after five years.

#Breaking: @RVACityCouncil passes a 1.5% increase in city meals tax for school improvements raising it to a combined rate of 12.8% effective July 1. @CBS6 pic.twitter.com/qWHz6aXnio

The meals tax increase will generate $9.1 million in new funding per year. With that added tax revenue, Richmond could expand its debt capacity to borrow up to $150 million to fund new school construction over the next five years.

Without the tax, the city has approximately $66 million of debt capacity through 2023.

The proposed school facility plan, passed by the Richmond School Board, comes with a $224.8 million price tag.

Enormous gratitude to #rvacouncil for your support of RPS’s students tonight. Look forward to working with you to find the resources we need to close the gap. And then let’s start talking about teaching & learning - the important stuff that happens inside our facilities. pic.twitter.com/c6V1lIjRNG

The funds from the meals tax will be exclusive for Richmond Public Schools and be placed in a special reserve, only available to fund school facilities.

In fact, City Council President Chris Hilbert signed a document stating Richmond City Council can put forth legislation to immediately repeal the tax increase if it is discovered that any of the funds allocated to the schools are being misappropriated.

After the increase was approved Monday night, Mayor Stoney released a statement that read:

“Tonight, the City of Richmond sent a strong message to its students that it is no longer willing to kick the can down the road when it comes to providing them with modern, safe and healthy environments in which to learn. This is just the first big step in what will be many more steps to improve our schools for our children, and for the generations of Richmond Public School students to come. After decades of telling them to wait, tonight we put them first. We are moving full-steam ahead with our plan to generate $150 million in new school construction and renovation of facilities that have been neglected for far too long.

This was not an easy decision, and it does not solve all of our schools’ challenges, but it was important that we get started now. I’d like to thank the members of City Council tonight for understanding the urgency and importance of our needs and having the courage to take action. And I would like to thank the Richmond School Board and Superintendent Jason Kamras for their advocacy and leadership for the children under their care. Through our Education Compact, we will continue to work together to tackle the challenges that lie ahead and forge solutions that will not only benefit our students but also make our city stronger.

To the restauranteurs who supported this proposal and those who had reservations about it, you are part of what makes Richmond a great place to live, work and play. I will continue to be a champion for you, and I look forward to finding ways that we can make it easier for you to do business and continue to thrive.

The large number and wide range of individuals and organizations who have supported this initiative – from education advocates to the real estate and business community to RPS teachers, parents and students – reinforce the broad consensus that we must move forward. Our kids can’t wait, and you heard their voices.

On Monday, February 5, the public got a firsthand look at Mayor Levar Stoney's proposal for an increased meal's tax. A tax that several restaurant owners and managers said fell squarely on their backs.

"It's tough. We're the ones singled out once again to carry the load," argued Jake Crocker with the Richmond Restaurant Alliance.

The Stoney administration said the increased meals tax would serve as a reliable, sustainable, and locally driven revenue source that will impact the least amount of city residents.

But restaurant owners and managers were skeptical and fearful.

"The meals tax has been used before to raise funds that have not gone to the project for which they were intended. The 2003 hike was one such example," said Shannon Conway, director of operations at the Rueger Restaurant Group.

"The Richmond restaurants, independently-owned restaurants, are already contributing exclusively $33 million in additional taxes that are not levied on any other industry," said Crocker.

But several proponents Monday night argued that Richmond schools are in dire need.

"There's leaking sealant, no heat, mouse droppings, no doors on restroom stalls, rolls of lights out, mold on the walls and ceilings are just a few of the problems that children should not have to deal with when they enter a school building," said Mary Gresham, a Richmond parent and public school teacher.

Newly appointed Richmond School Superintendent Jason Kamras, who plans to send his own two sons to Richmond Public Schools in the fall, said if the school system is to carry out a $224 million plan to renovate and build new schools, sacrifices must be made.

"There are too many buildings that don't say to the kids in those buildings that the adults of this city truly love them because if they did, we wouldn't be sending them to schools that look the way they do," said Kamras.