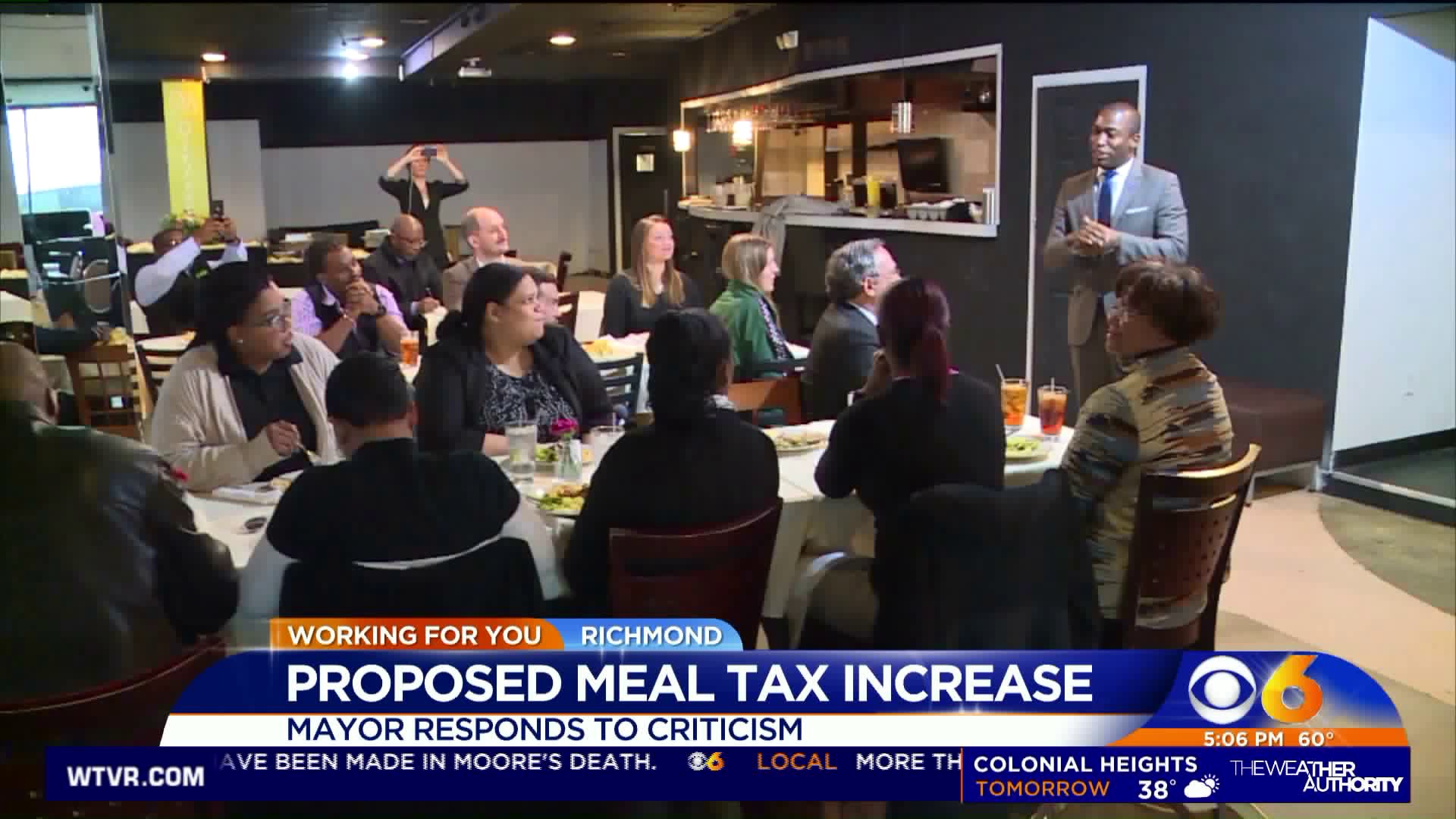 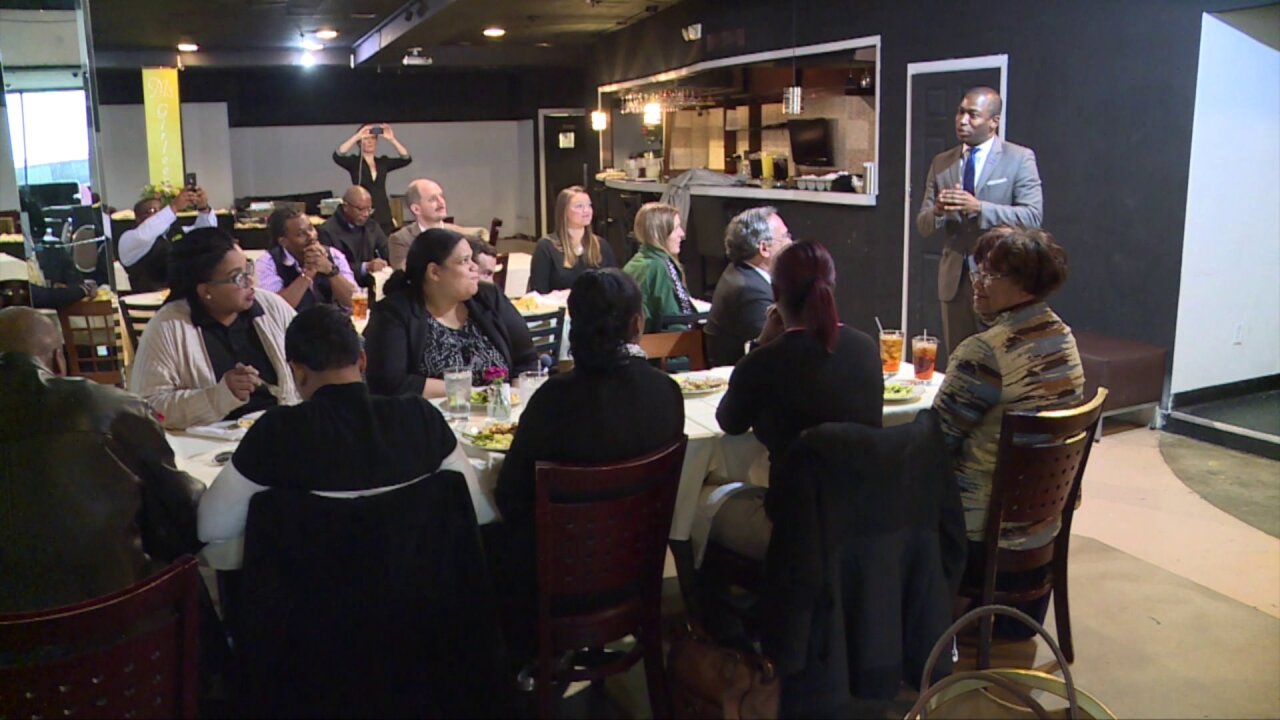 RICHMOND, Va. – On Thursday during a lunch with restaurant owners to talk about the proposed meals tax increase, Mayor Levar Stoney first raved about the cabbage before he discussed the urgent need to fix schools, and tackled criticism of his plan.

As the mayor ate, Richmond parent Andrian Jimenez stood outside Ms. Girlee’s Restaurant with a neon green sign that read “STOP WITH THE LIES.”

Jimenez said he does not trust that a tax increase will change anything for Richmond schools, and thinks the current tax dollars towards schools are enough.

“They’re [tax dollars] not doing anything, Jimenez said. “You’re going to get more and more money, they’re going to raise it to a dollar and quarter or whatever, it’ll keep going up.”

Discussion over the years has indicated adamant public support for improving the outdated school system -- called "decrepit" by the mayor -- but funding has long been a more contentious subject. While some school board members have said cuts and restructuring are the primary way to fix city schools, finding the type of funding needed will be difficult, if not impossible, in the already cash-strapped system.

George Mason Elementary. Reoccurring heating issues plague the school , which is almost a century old and was last renovated in 1980.

The plan, which needs approval by City Council, would increase the current meal tax from 6 percent to 7.5 percent. The current combined state sales and local meals tax is 11.3 percent; that number would increase to 12.8 percent. It would be the difference of tax bringing a $60 check to $67.68 versus $66.78 – or 90 cents difference. Stoney’s plan estimates the tax would generate around $9 million a year, and the city could expand its debt capacity to borrow up to $150 million to fund new school construction.

“You can’t do that by finding efficiencies, you do that by having a sustainable revenue source, and that’s what we are trying to do with an increase of 1.5 cents on the dollar,” Stoney said.

Restaurateurs and residents say the mayor’s plan falls short of funding the needed renovations citywide and passes the school building bill to customers.

The proposed school facility plan passed by the school board costs $224 million. That includes building new schools for E.S.H. Greene Elementary, Elkhardt-Thompson Middle, George Wythe High, George Mason Elementary, and the new Woodville Elementary. The mayor explained the difference between the school board total and his proposed plan.

“The $150 million is a start, and a good start, but we understand there are many, many needs,” he said.  “These are to meet the emergency and critical needs of our schools.”

The mayor has said there is "no individual industry above considering" but reducing budget inefficiencies or finding other revenues would be supplemental, not replacements for the money needed to finance immediate construction.

“Some of these school buildings aren’t fit to house farm animals to be honest with you,” said Lester Johnson, who owns Mama J’s restaurant.

He said he’ll support whatever plans leads to school renovations.

“As a restaurant owner, I don’t necessarily want to see a tax on anything, but nobody’s having that conversation,“ Johnson said. “And that’s what I think this is about.”

The theme of urgency to fix a failing RPS ran throughout a press conference hosted earlier in the week, where the mayor was joined by a city council and school board representative, as well as former state Senator Henry Marsh and his daughter, and restaurant owner Shane Roberts-Thomas. One common denominator among all, except for the mayor, was that they came up through the RPS system.

“We are in charge with preparing our children to be successful in a global, highly technological society,” said Dr. Cynthia Newbille, 7th District Councilwoman. “That can only happen in state of the art facilities. We don’t have those in this moment.”

Former state Sen. Henry Marsh underscored Newbille’s description of RPS facilities, calling the conditions deplorable when he was at George Mason in the 1940s.

Image made from two sets of data from Richmondgov.com. A majority of the antiquated schools are in areas where the majority of the population live below the poverty line.

While the mayor has support from some business owners, especially from those who attended RPS in census tracts where the majority live at or below poverty levels, there are many restaurant owners who have begun to mobilize and express discontent with the plan, calling it bad policy.

“This is a politically quick fix and not the proper long-term way to fund our schools,” wrote restaurant and real estate owner Carter Snipes, in an email. “They have not even tried to do any of the heavy lifting on solving this problem.”

Snipes, who owns The Hofheimer in Scott’s Addition, pointed to examples of the millions spent on “corporate welfare” like building Dominion CenterStage, and luring the Washington Redskins to practice at a new facility in Richmond.

“And if they do have to tax, it should be across the board,” Snipes said, such as cigarettes and real estate. “We should all pay the burden for a huge community need like schools. Not just one industry.”

A discretionary tax like the meals tax only impacts those who chose to dine out, versus a real estate tax, which would impact 100 percent of Richmond property owners.  Federal data indicates that tobacco tax revenues have declined in recent years.

Many  restaurateurs maintain that the highly competitive industry can not handle taxing residents or visitors any more than the current amount before they lose to other counties.

“For example, imagine booking a family reunion in Richmond and then finding out you will have to pay 7.5% more than in the surrounding counties.  Our neighbors in Chesterfield and Henrico will be the real, unintended beneficiaries of this proposed tax as Richmond residents and visitors begin eating, drinking, and planning events outside of Richmond to avoid the added expense,” wrote the Rueger Group in a press release.

“We want to continue to be a destination for young people, for newcomers to move here to the city of Richmond,” the mayor said Tuesday. The administration wants people to stay in the city and raise children, not lose residents to the counties over better public-school facilities.

The meal tax increase in 2003 from five to six percent was to help offset the CenterStage performing arts center.  A “Sunset Clause” dictated that the increase would be revoked after the facility was built, but that never happened. Opponents of the currently proposed increase believe the city should simply be able to turn to that into revenue from schools.

A city that already has outstanding debt can’t rely on a current revenue source to immediately build new schools when it can’t already cover current debt -- and urgency remains the driving message behind the mayor’s campaign to pass his proposal.

Shane Roberts-Thomas, owner of Southern Kitchen has a daughter who teaches at Woodville Elementary now, and who went to RPS just like she did.

“Have you actually been over there and been a part of what’s going on?” said Roberts-Thomas. “He has no other choice but to do it now. It can’t continue on. Because it’s not your child it’s not important? What if it was your child – so just let it be?!

“He’s making you do something, finally,” she added. “Kids can’t wait.”

Stoney’s proposal must be approved by City Council before becoming official. City residents who wish to weigh in should contact their council person.