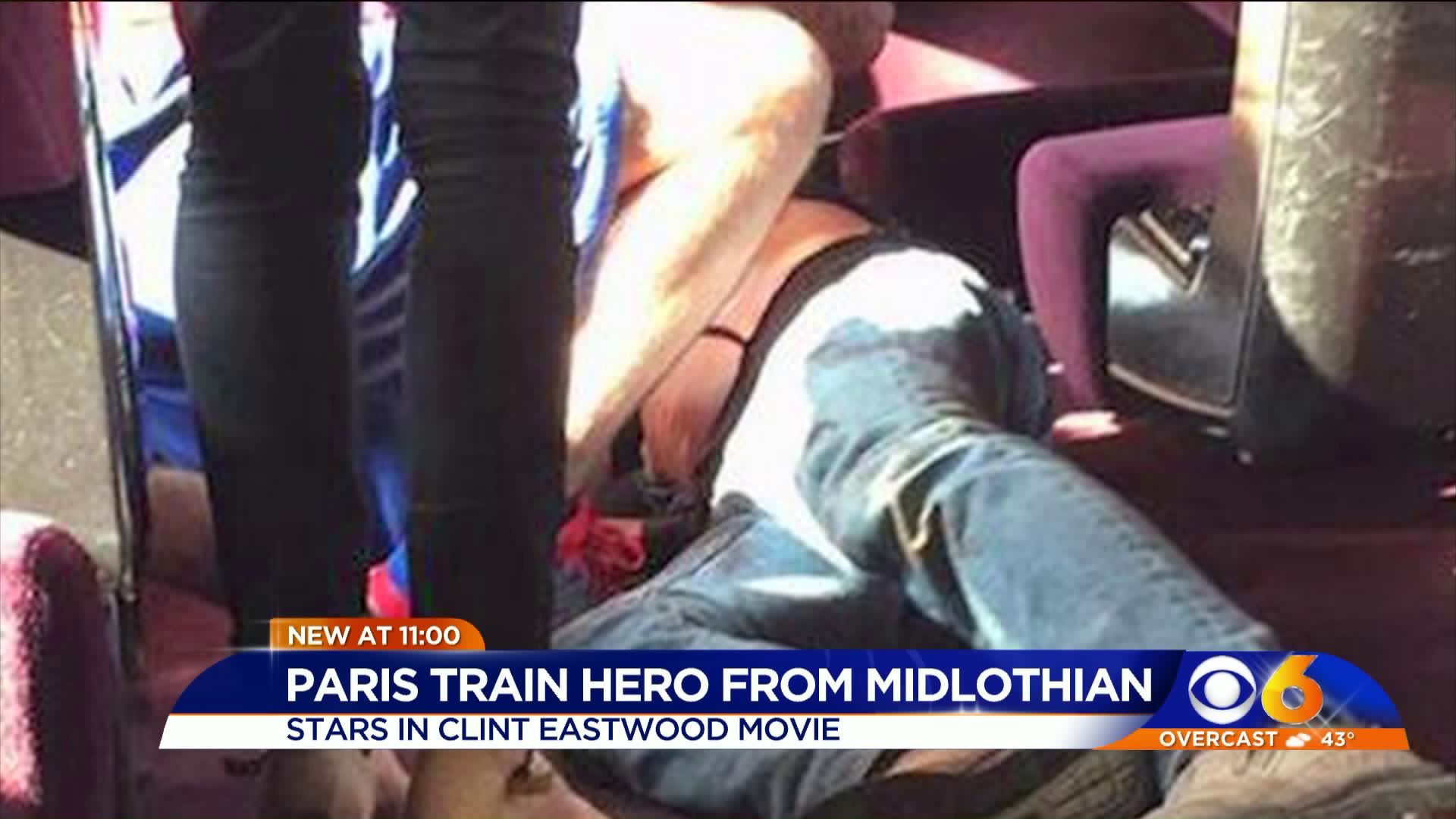 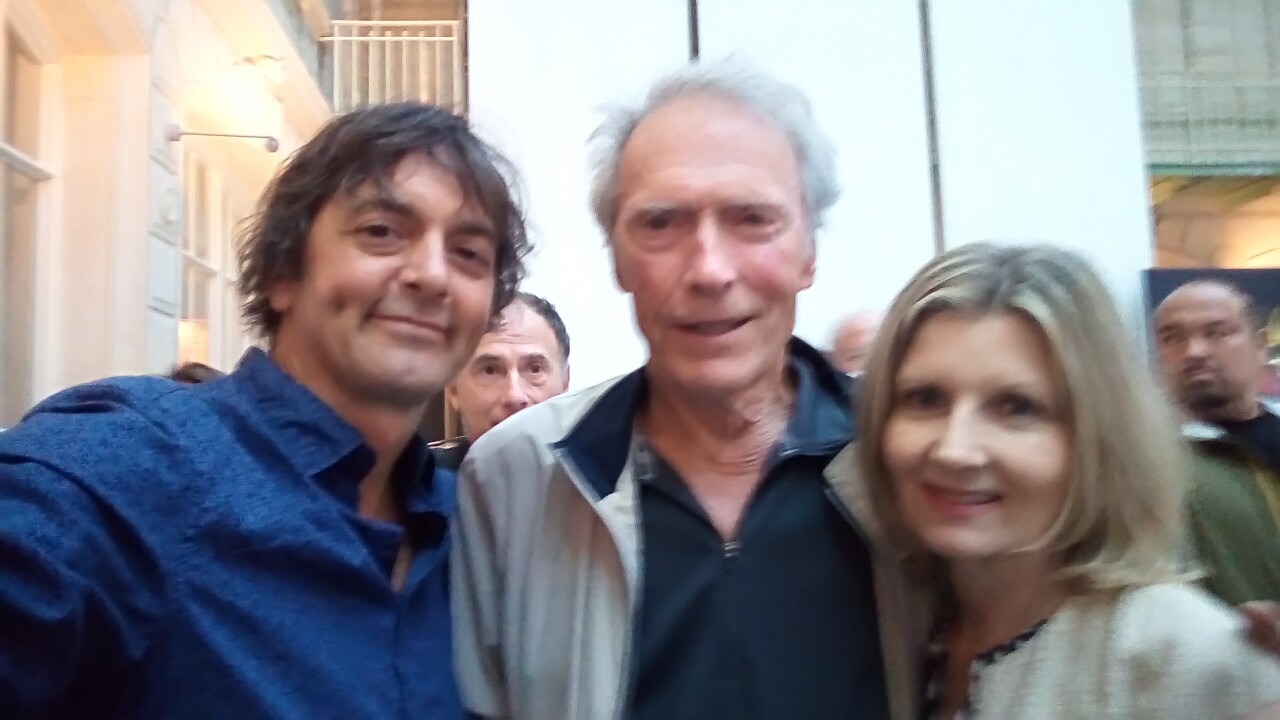 CHESTERFIELD COUNTY, Va. -- The Midlothian man hailed as a hero after he helped disarm a gunman during a terrorist attack on a high-speed train traveling to Paris from Amsterdam, is now set to star in a film about the fateful day in August 2015.

Mark Moogalian, along with his wife Isabelle Risacher Moogalian, will make their big screen debuts as themselves in Clint Eastwood’s latest drama, “The 15:17 to Paris.”

The Warner Bros. film is based on the book “The 15:17 to Paris,” which tells the story of American passengers and lifelong friends, Anthony Sadler, Alek Skarlatos and Spencer Stone, who were aboard the train when a gunman opened fire.

The movie stars Sadler, Skarlatos and Stone, who helped stop the attack by tackling and hogtying the gunman, Ayoub el-Khazzani, a Moroccan national.

During the August 21, 2015 incident, Moogalian, a 53-year-old English professor at the Sorbonne in Paris, found himself in the middle of the attempted attack.

Moogalian said all he could think about was his wife that fateful night after he noticed a suspicious man carrying luggage into the train's bathroom. He was standing in the bathroom door, holding an AK-47.

“When I went back in, I knew there was a chance that I would not make it. I know if we didn’t stop it then. It would be like shooting fish in a barrel,” said Moogalian.

He thwarted the attack by tackling the suspect and wrestling away an AK-47, but as he ran with the weapon to warn his wife and others he was shot in the neck from behind, bleeding profusely.

“Nobody died. Yes, I suffered some nerve damage. But I look at the incident as a victory,” said Moogalian.

Moogalian, along with Stone, Sadler and Skarlatos, and Chris Norman, received France’s highest recognition, the Legion of Honor.

Moogalian became involved with "The 15:17 to Paris" in May 2017, after receiving a phone call from movie producer Tim Moore. Moore asked Moogalian and his wife to portray themselves in the film.

Without any hesitation, the Midlothian High School graduate knew he wanted to be a part of the Eastwood-directed projected.

To keep the authenticity of the story, Clint Eastwood recruited dozens who were on the train that day, from train staff to paramedics who responded to the scene.

“That’s what made it special,” said Moogalian. “We were so happy to all get back together with Spencer, Alek, and Anthony.”

For Moogalian, shooting the movie was especially difficult because his father passed away on the day he began filming.

“He wanted me to do the film. So that eventually outweighed everything else,” he said.

As far as reliving the events?

“I think it was harder for my wife Isabella. She had to see me like that again,” said Moogalian.

Moogalian said he and his wife did not receive any formal acting lessons for the film.

“Clint would say ‘do it,’” he recalled. “We were able to do what we had to do and then make adjustments, if needed.”

Working on his first Hollywood film, you would think nerves would be an issue, but Moogalian said he didn’t feel any pressure from a director prospective.

“The direction process was natural and easy,” he recalled. “Clint makes you feel comfortable right away. I was impressed by how casual he was on the set.”

In fact, Moogalian described the multiple Academy Award-winner as accessible and down to earth.

“At first, I was thinking that I wouldn’t have a chance to talk to him,” he said. “He was completely open, and I spent about two hours over four days talking about life and family.”

Moogalian, who has seen "The 15:17 to Paris", said Eastwood got the action scene right.

“They were able to interview everyone involved and make the scene, so everything fit. We were really happy about that,” he added.

Moogalian says he’s proud to be a part of the important film.

“I think what the film shows is that ordinary people can end up doing something extraordinary.”