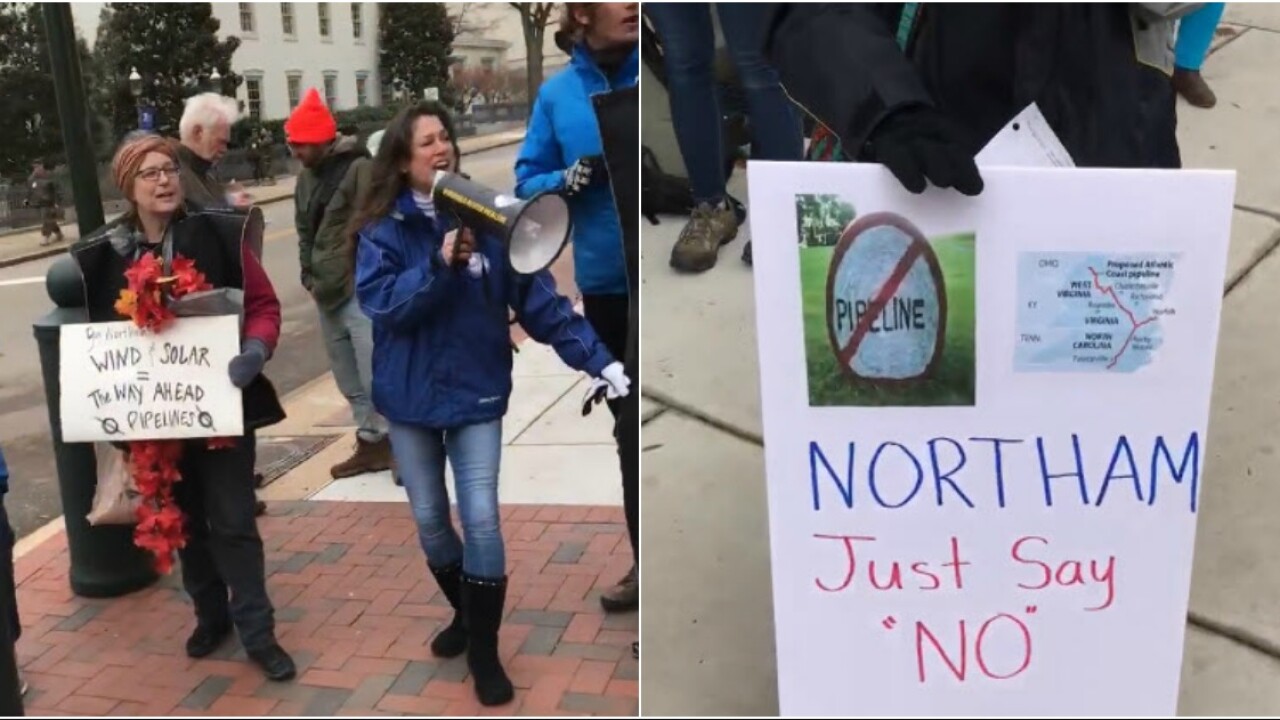 The demonstrators unveiled a banner saying “our water > pipelines” and waved other signs as they chanted “water is life” through megaphones.

The protesters were with Virginia River Healers and a coalition called “Water is Life. Protect it.” They were demonstrating against the Atlantic Coast Pipeline and the Mountain Valley Pipeline, which would cut across the western part of the state.

Tom Burkett, the lead organizer of Saturday’s protest, complained that the pipelines would carry gas extracted from hydraulic fracturing, or fracking. The technique involves injecting high-pressure mixtures of water, sand or gravel and chemicals into the ground – a process that opponents say damages the environment.

“In doing this, there is a lot of water contamination concerns because of the millions of gallons of chemicals that the process uses,” Burkett said. “There is also the concern that with these pipelines being constructed, the fracking companies will have a better infrastructure and will then get a business incentive to continue fracking even more.”

Burkett noted that Northam has accepted campaign contributions from Dominion Energy. He said he wished politicians would pledge to not accept money from energy companies that have a stake in pipelines.

Northam has given mixed signals on whether he approves of the pipeline projects.

During the Democratic gubernatorial primary, Northam avoided taking a firm stand for or against the pipelines – drawing criticism from his opponent, Tom Perriello, and environmentalists.

Northam has said he supports the pipelines if they can be constructed in an environmentally safe way and the rights of property owners are not violated. Last week, Northam said he supports U.S. Sen. Tim Kaine’s proposal that the Federal Energy Regulatory Commission reconsider its vote to approve the Atlantic Coast Pipeline.

About 10 of the demonstrators at Northam’s inauguration were immigrants’ rights supporters. Wearing their signature orange beanies, they were showing their support for undocumented immigrants known as Dreamers, who were brought to the United States as children.

Dreamers had been protected against deportation by an Obama administration policy called Deferred Action for Childhood Arrivals. President Trump has indicated he may end that policy.