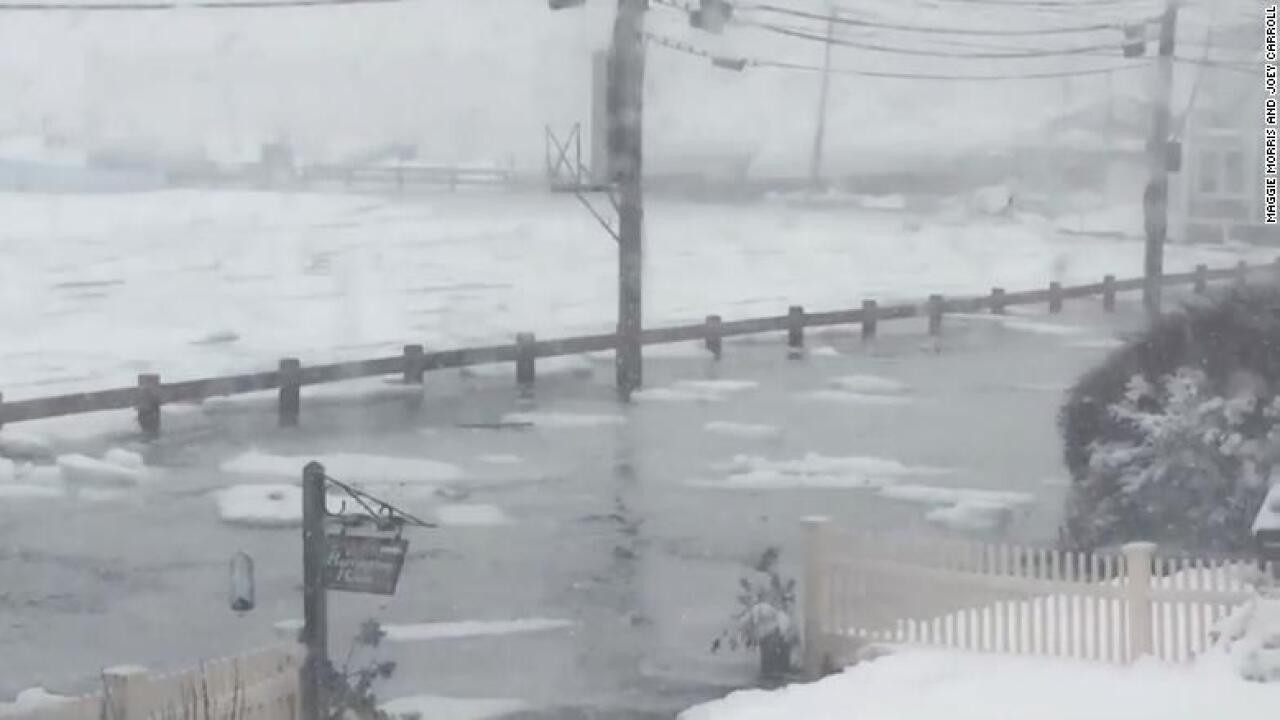 Call it the perfect storm.

Beyond the blizzard, the winter storm that battered New England on Thursday hit at just the right — or wrong — time, yielding record tides and frigid coastal flooding in several spots, including Boston, CNN’s forecasters said.

The unprecedented coastal flooding was caused by a combination of winds blowing ocean water onshore and Monday’s supermoon, forecasters said.

The supermoon phenomenon occurs when the moon becomes full the same day it reaches its perigree, which is the point in the moon’s elliptical orbit that it’s closest to Earth.

And this week’s supermoon definitely led to a higher tide, said CNN meteorologist Jennifer Varian. And the storm hit right as the tide — which was already set to be the highest afternoon tide of the month — was rising.

Add rising sea levels seen over the past couple of decades due to melting ice sheets and glaciers, CNN meteorologist Brandon Miller said, and it was enough to push water over sea walls and into coastal New England streets.

Throw it altogether and you have a rare event the National Weather Service said only happens once every 25 to 30 years.

“We’re not even talking about perfect as in the day of the week,” said CNN meteorologist Judson Jones. “We’re talking about the hours. This thing in nature was perfect.”

The consequences were historic.

The tide gauge at Boston Harbor matched the record of 15.1 feet, set by the blizzard of 1978. That left dozens of people dead, hundreds of homes destroyed and caused hundreds of millions of dollars in damage.

Firefighters in Boston used rubber rescue boats to rescue dozens of residents stranded by the freezing water pushing from the Atlantic Ocean into coastal Massachusetts.

Cars in several New England towns were partially submerged in about 3 feet of water and were also covered in a coat of snow and ice.

Massachusetts Gov. Charlie Baker deployed the National Guard when coastal flooding was reported in about 32 communities across the state.

“The main issue is that it will take time for flood waters to complete recede” and the bitterly cold temperatures could cause the leftover waters to freeze, the National Weather Service said in an advisory.

It could take hours or even days for the water to be completely gone because of “complications” of snow and ice-clogged drains.

Some roads could remain impassable for a couple of days, officials said.

In Boston, firefighters carried a man away after his car became stranded in rising waters in an underpass, the Boston Fire Department tweeted.

Floodwaters came up to the doors of homes in Hull, Massachusetts and some people were forced to flee their dwellings.

In one case, the fire department used a front loader to rescue a woman from the second floor of her home, photos from neighbor Jennifer Olivieri show.

Adam Abougalala in Revere, Massachusetts had “no heat, no electricity, no hot water,” when the floodwaters came into his basement, he told CNN.

In his neighborhood, the water covered the wheel wells of cars for several hours as the snow kept falling.