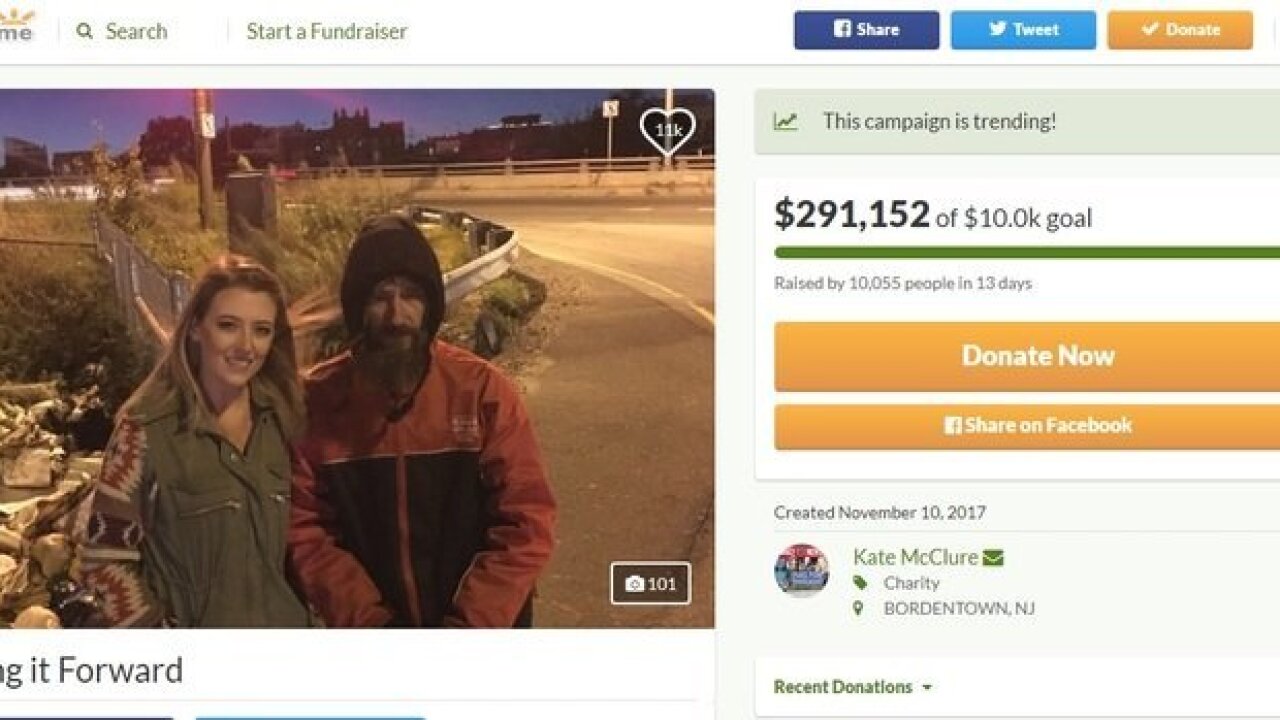 When Kate McClure first met Johnny Bobbitt Jr., he was homeless. He spent this Thanksgiving resting in a hotel, his feet up on the bed, drawing up a grand plan for his new life — thanks to several thousand dollars she raised to repay him for a good deed.

When Kate McClure first met Johnny Bobbitt Jr., he was homeless. He spent this Thanksgiving resting in a hotel, his feet up on the bed, drawing up a grand plan for his new life — thanks to several thousand dollars she raised to repay him for a good deed.

When homeless veteran Johnny Bobbitt Jr. used his last $20 to buy Kate McClure gas after her car ran empty and stopped on Interstate 95, he didn’t know his good deed would change his life.

In October, McClure was driving down Interstate 95 in Philadelphia when she ran out of gas. Scared, she got out of the car to head to the nearest gas station and met Bobbitt. He told her to get back in the vehicle and lock the door. Minutes later, he emerged with a red gas can. With the last bit of his money, he saved her.

McClure, touched by Bobbitt’s selflessness, decided to pay it forward, finding ways to help him in the following weeks and then launching a GoFundMe page to help collect donations for him.

“Going into this, we didn’t know who Johnny was or if he was a good person,” said McClure. “But that didn’t matter. It was that experience with him, when he helped me. That was all I needed.”

Can’t wait to get my own little buddy!

Now, only a month later, Bobbitt has bought a house, is buying a car and plans to adopt a dog. And while the grand scheme for his new life is still in the works, Bobbitt has decided it’s time to return the favor.

A new step toward a new life

After talking to him a few times after he helped her, McClure launched the GoFundMe for Bobbitt to pay him back for his generosity and kindness. Her goal was to reach $10,000 — just enough to pay for his first and last month’s rent, a reliable vehicle, and enough money to sustain him for six months. It would be enough to survive, at least for a while.

But in 27 days, McClure has raised more than $400,000, all of which is going to Bobbitt. In just a little bit of time, McClure, with the help of her boyfriend, Mark D’Amico, changed Bobbitt’s life.

When Bobbitt got his first new computer (and learned how to use emojis), the first thing he did was thank more than 14,000 people, all who donated to his future.

“I am deeply humbled and so incredibly grateful for the attention and love that I have received thus far,” Bobbitt wrote on the page.

“I will never be able to put into words how I feel and all the emotions I have felt because of this experience.”

On Monday, Bobbitt purchased his new home, using the hundreds of thousands of dollars donated by people around the world to help him start a new chapter in life.

And now, Bobbitt is going after buying his dream car: a 1999 Ford Ranger. He has two trust funds set up in his name, one if which is for his retirement. The retirement trust will also go toward his dream of someday living in a cabin in the country and owning his own piece of land.

With the help of McClure and D’Amico, Bobbitt will have a bank account set up for him with funds needed until he finds a job.

Giving back to humanity

Since the beginning, Bobbitt has shared everything he had with anyone around him who needed it, according to McClure.

After McClure met Bobbitt, she came back to him often, giving him a few dollars or something to eat. She repaid him for the gas and gave him a jacket, hat, gloves and socks.

But no matter how much or how little he had, he still wanted to help others. When McClure gave him a bag of cereal bars, he first thanked her — then asked if she wanted one, she said.

Another time, she gave him two gift cards to a convenience store and a case of water. The first thing he said then was how excited he was to show his friends — two other homeless men who were close to Bobbitt.

Bobbitt, a North Carolina native, lived in Missoula, Montana, according to his Facebook page. He studied nursing and was a former paramedic and firefighter. He also served in the Marine Corps, according to the page.

CNN has tried to reach Bobbitt for comment but has not received a response.

While Bobbitt’s life may have changed in a single month, that’s not the only thing on his mind.

His first goal is to donate to organizations around Philadelphia that helped him get through the rough patches. He also wants to find people who are stuck where he used to be.

Bobbitt’s devotion to helping people has led him to finding homeless veterans who need the help he graciously received.

And to McClure, Bobbitt is not the only one who deserves a second chance.

“Nobody should be on the streets,” she said. “Nobody.”