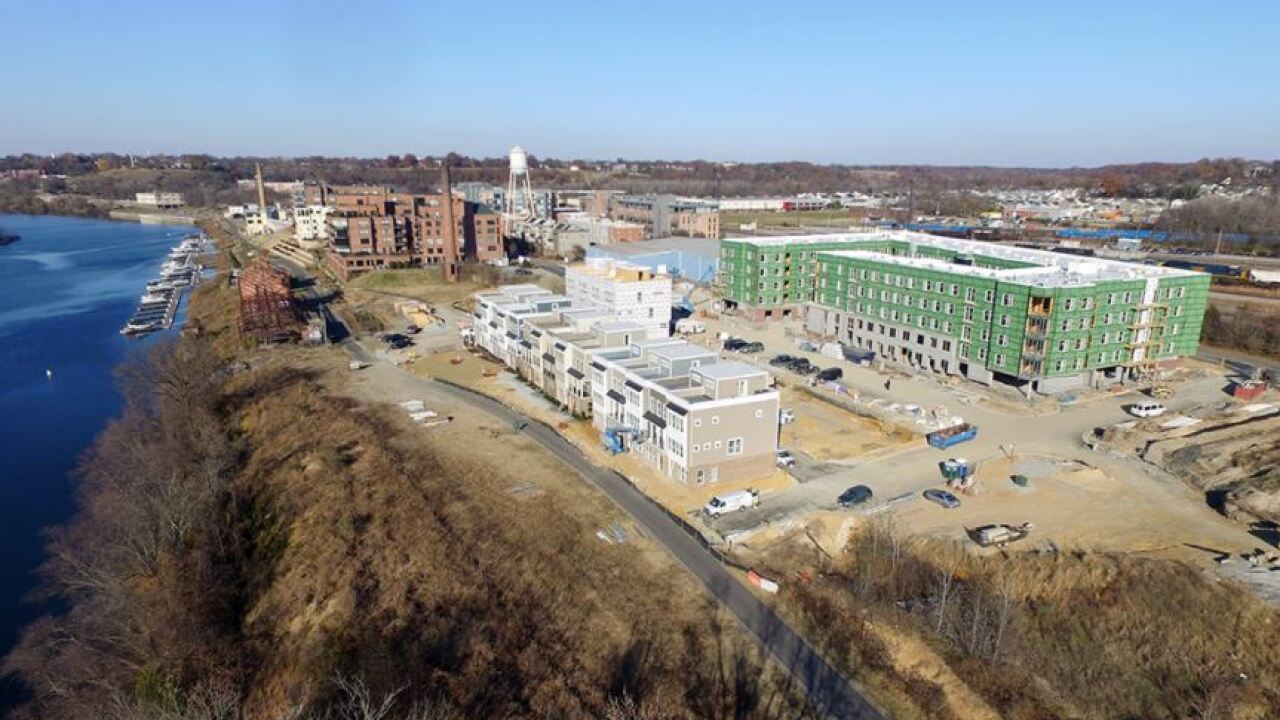 Apartments and townhomes are rising at Rocketts Landing uphill from a pair of riverside sites being marketed for offices. (Kieran McQuilkin)

HENRICO COUNTY, Va. — With nearly 200 more homes nearing completion and further development in the works, a new phase at Rocketts Landing will offer a first for the project: office space along the James River.

WVS Cos. is planning a 21,000-square-foot riverfront building that is being marketed for office use, just downhill from where construction is progressing on a 156-unit apartment building and 28 new townhomes on the southern end of the mixed-use development.

An additional commercial space with upwards of 6,800 square feet on the new apartment building’s river-facing side is slated for office or retail, and an existing structure along the river – the shell of a 19th-century industrial building – is envisioned for redevelopment as office space as well, downhill from the site of another planned apartment building.

Cushman & Wakefield | Thalhimer is marketing the sites for WVS, the developer behind the 50-acre project between the river and Route 5 on the Richmond-Henrico line. WVS engaged the real estate firm to determine best uses for the spaces that were initially envisioned to house retail.

While retail remains an option, Thalhimer brokers Jeff Cooke and associate Amy Broderick said the square-footage of the spaces, and their locations along the riverfront, make them more suitable for use as offices.

“Retail space struggles in the middle of downtown,” Cooke said. “We think this will make a unique office space for somebody.”

The two buildings are being offered for sale or lease, while the space in the apartment building is for lease only. Cooke and Broderick said each space is suitable for one tenant but could be divided for two or subleased by a buyer. The new buildings would be constructed once buyers are secured.

Click here to keep reading and see photos on RichmondBizSense.