Super Frost Moon: Share your pics of only full supermoon of 2017 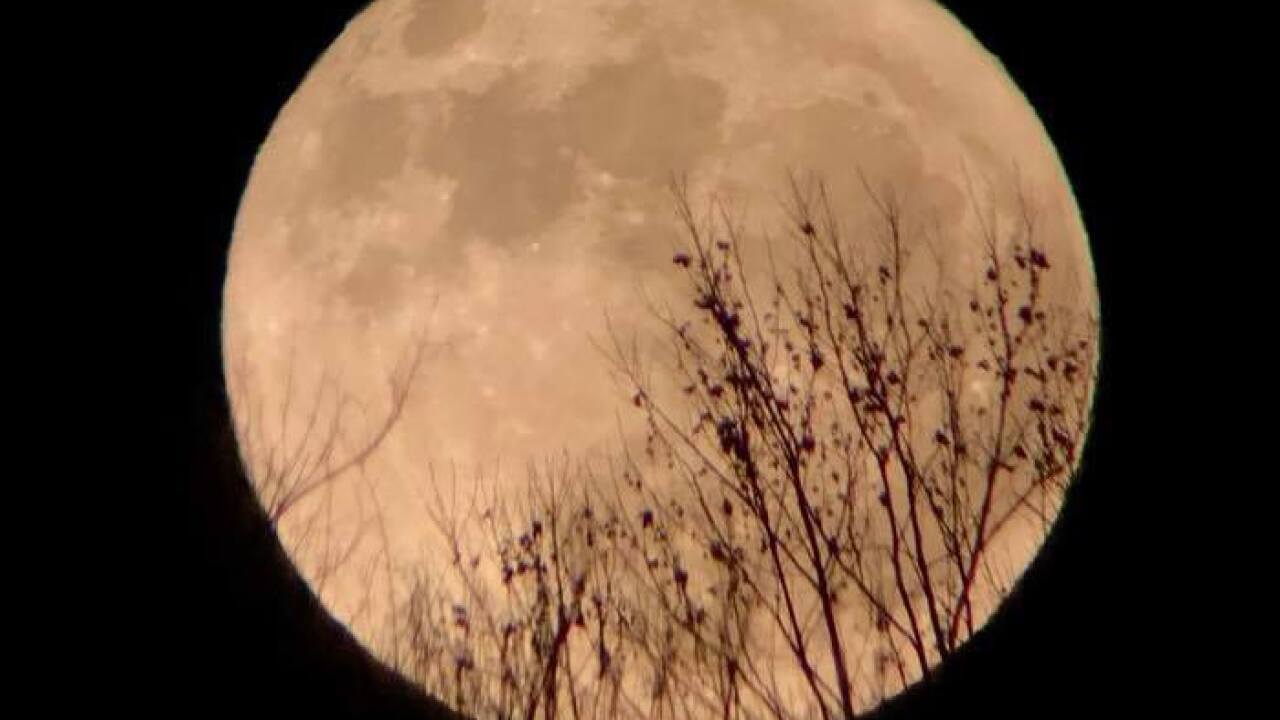 On Sunday, stargazers, astronomers and curious sky-watchers will get a chance to witness the first and only full moon supermoon of 2017.

On Sunday night, the moon will shine 16% brighter and appear 7% larger than its usual size. Last year, a memorable supermoon was marked in the history books. In November 2016, the moon was closest to the Earth than it had been since 1948, producing a supersized supermoon.

This supermoon will be the first in the series of three consecutive full moon supermoons, the next two will be in January.

So when is the best time to look?

Most astronomers suggest watching the supermoon right after sunset and into moonrise, and minutes before the next sunrise as well.

According to timeanddate.com, the best time to enjoy a full moon supermoon is after moonrise when it is just above the horizon. At this point, a supermoon looks bigger and brighter than when it’s higher up in the sky.

While the moon officially reached its fullest Sunday morning, it will continue to appear “super” until it sets once again.

And for anyone unable to step outside and see the moon, you can watch a livestream of the phenomenon.

Supermoon above Montpelier (From Andy Kaufmann)

The science behind the supermoon

“The moon’s orbit is not a perfect circle. It’s more like an oval, so at times it’s closer to the Earth than it is at other times. The difference in distance between these close and far points can be as much as about 30,000 miles.”

The distance between the moon and Earth constantly changes. Each time the moon orbits the Earth, every 29.5 days, it will reach a close point to the Earth (perigee), and a far point (apogee), and occasionally, the close point will be close to the date of the full moon or new moon, a supermoon.

“For this year’s final supermoon, the perigee distance will be approximately 222,135 miles in the early morning hours of December 4 (in the United States),” says Nichols.

And while it may appear super, the term “supermoon” is not the official term for the astronomical phenomenon. The scientific term is “perigee syzygy.” Perigee syzygy has occurred three previous times in 2017.

However, December’s full moon is the only visible supermoon. That’s because the previous two were around the time of a new moon, which isn’t visible in the sky.

For Muslims all over the world, this supermoon marked an important date. According to the Islamic calendar, the months start with the sighting of the waxing crescent moon shortly after sunset. This month’s full moon approaches the middle of Rabi’ al-awwal, the third month of the calendar.

This is a time when most Muslims around the world celebrate Mawlid, or the birth of the prophet Muhammad. While different sects of Islam celebrate the prophet’s birthday on different days, the majority of Muslims celebrated his birth which coincidentally aligned with this year’s only full moon supermoon.

Don’t let your eyes fool you

While the moon undoubtedly appears both bigger and brighter than usual, our eyes tend to trick us into seeing the moon as larger than it truly is.

Part of it depends on where you’re viewing the supermoon.

“When you look at it from near the horizon, there’s an optical illusion,” says Nichols. When the supermoon is viewed low on the horizon, it appears huge. This is known as the moon illusion and the moon hasn’t grown; it’s a trick your eyes are playing on you.

Nichols says that despite the visible difference between a regular full moon and a supermoon, it is not as grand as it appears.

Considering that a full moon can be covered with a fingernail, even a 7% larger moon may not look that much bigger.

How to photograph the supermoon

For everyone waiting to catch a glimpse of the last supermoon of 2017, taking pictures to preserve the moment can be easy.

Bill Ingalls, a NASA photographer, says that those capturing the event through their smartphones have to focus on the correct light balance.

“Tap the screen and hold your finger on the object (in this case, the moon) to lock the focus. Then slide your finger up or down to darken or lighten the exposure.”

For those using DSLR cameras, Ingalls recommends using another subject in the image, like a person, pet or landmark to compare to the size of the moon.

“Often I find when the moon is near the horizon I have a better chance of incorporating it with a landmark or person, but there are no rules and sometimes a tall object such as the Washington Monument here in DC can be used when the moon is at a very high angle.”

While the supermoon can come out looking larger in photos (thanks to long lenses and editing) than it does when looking at it in person, Nichols says it is an incredible opportunity to get people interested in science and astronomy.

“The supermoon gets headlines because the moon’s a little bigger and a little brighter, but people get frustrated that they can’t always tell the difference. Still, it’s a great excuse to just go out and look at the sky,” says Nichols.

“You can do the experiment with your outstretched thumb. Do it near the horizon, and do it again away from the horizon. Then do it somewhere else. It’s a fun way to get involved in science.” 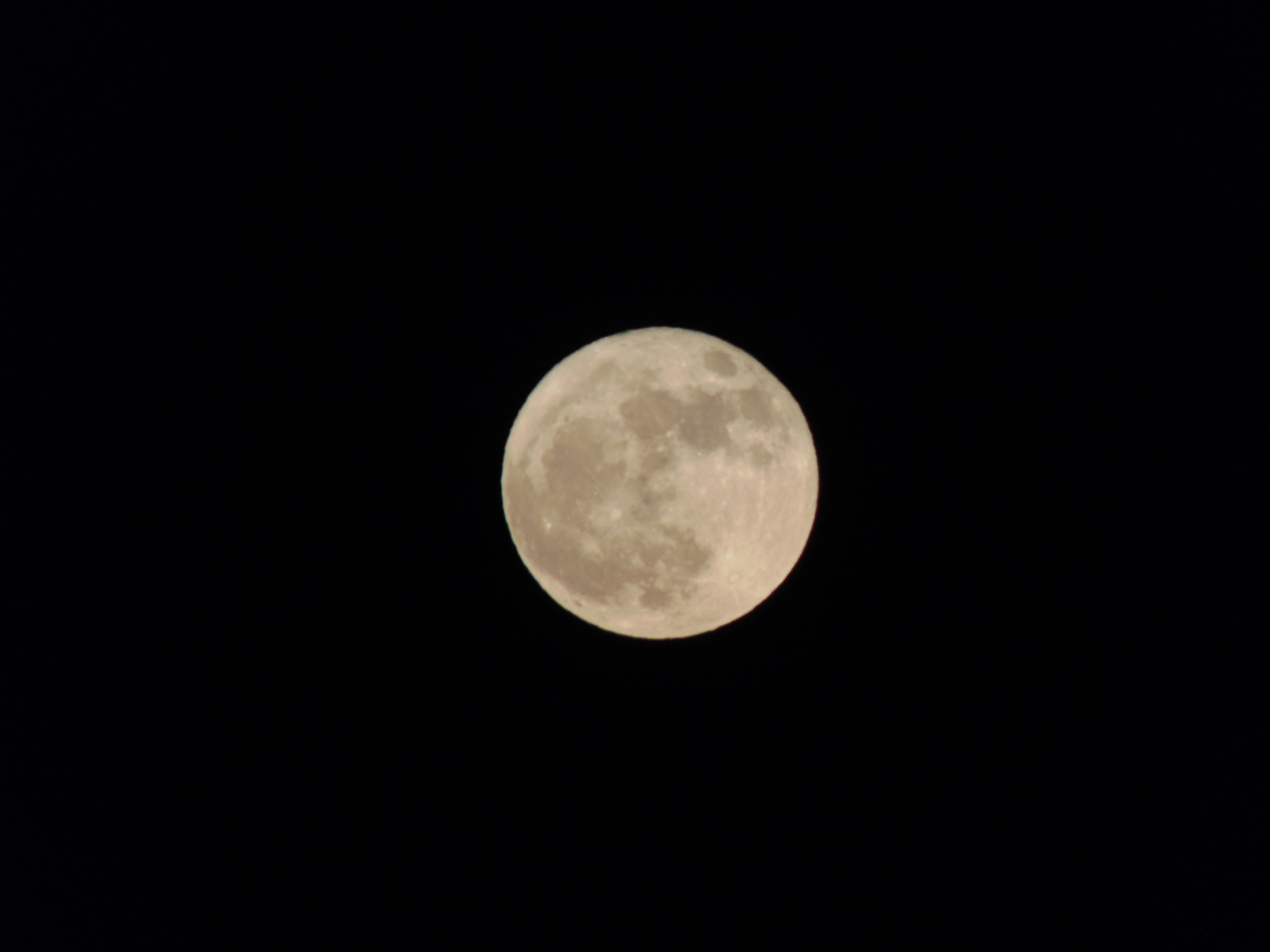