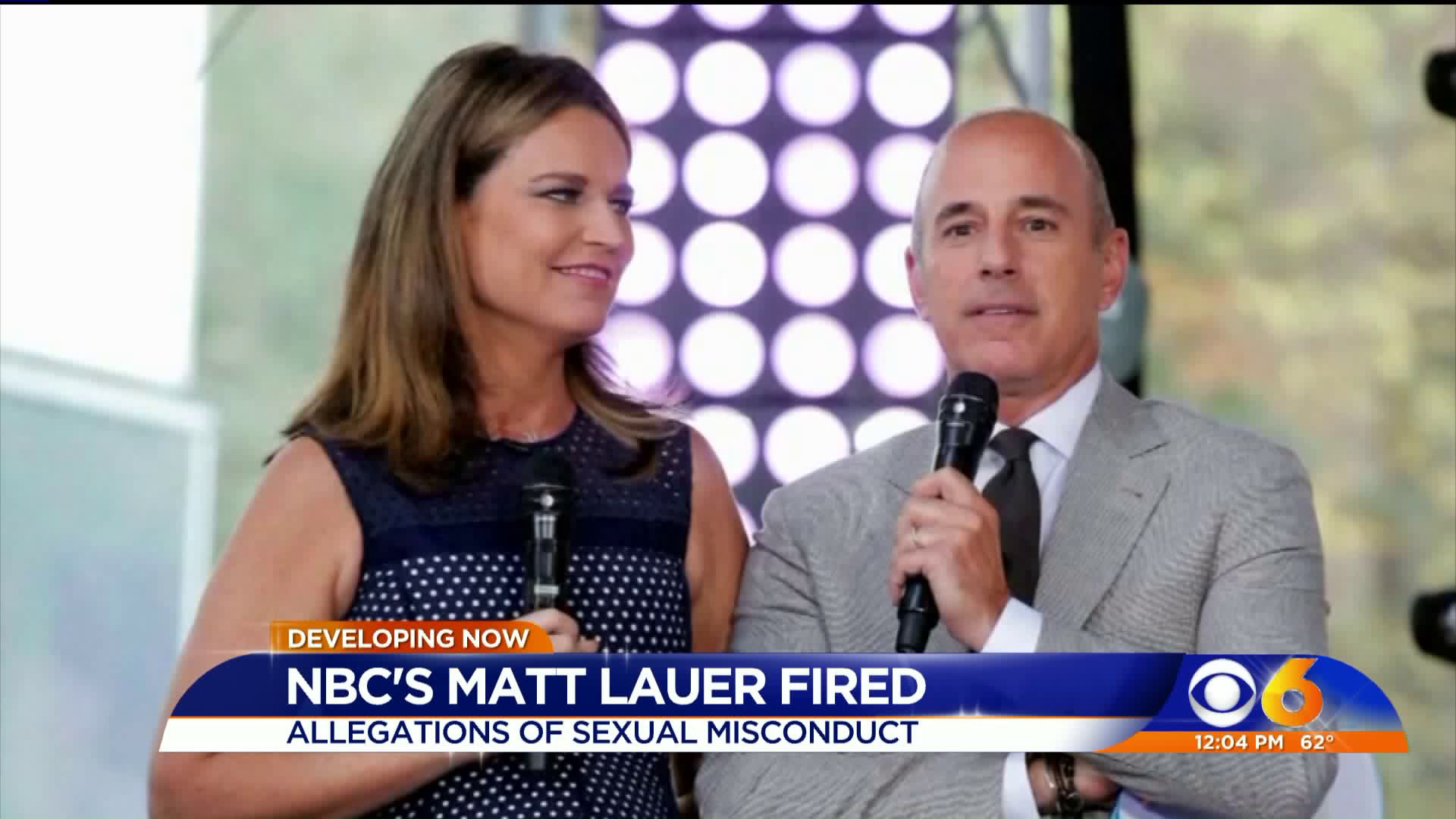 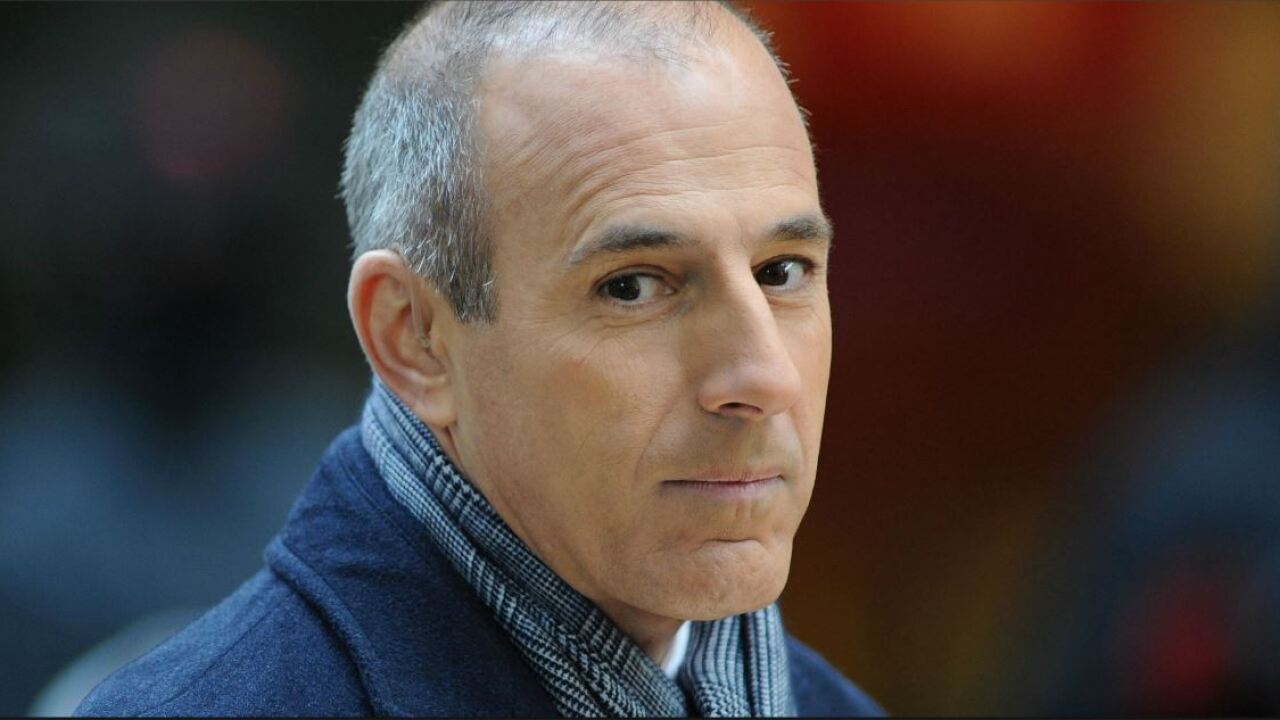 NEW YORK -- Matt Lauer was fired from NBC News on Wednesday after an employee filed a complaint about "inappropriate sexual behavior in the workplace," the network announced.

Savannah Guthrie made the announcement at the top of the "Today" show. "We are devastated," she said.

The "Today" show is one of the most popular and most profitable franchises on American television. Lauer was the cornerstone of the program for two decades.

So his sudden ouster came as a shock to viewers -- but not as a complete surprise to his "Today" show colleagues. They knew that multiple news outlets were investigating Lauer's off-camera conduct.

One of those outlets, The New York Times, was in touch with an accuser who then met with NBC lawyers and human resources officials on Monday evening.

The accuser's attorney, Ari Wilkenfeld, said in a statement that he and his client met with representatives from NBC's human resources and legal department on Monday at 6 p.m.

"Over the course of several hours, my client detailed egregious acts of sexual harassment and misconduct by Mr. Lauer. In fewer than than 35 hours, NBC investigated and removed Mr. Lauer," Wilkenfeld said. "Our impression at this point is that NBC acted quickly and responsibly, as all companies should when confronted with credible allegations about sexual misconduct in the workplace. It is our hope that NBC will continue to do what it can to repair the damage done to my client—their employee—and any other women who may come forward. While I am impressed by NBC's response to date, I am awed by the courage my client showed to be the first to raise a complaint and to do so without making any demands other than asking the company do the right thing. This is how the system should work."

An investigation ensued on Tuesday. A decision was made to terminate his employment on Tuesday evening -- a swift turnaround time.

NBC News chairman Andrew Lack, a close friend of Lauer's, called and talked with him, according to a source with knowledge of the process.

Lack told staffers on Wednesday morning that Lauer was accepting of the decision and expressed remorse, the source said.

The details of the woman's complaint have not been made public. But Lack said in a memo to staff that "it represented, after serious review, a clear violation of our company's standards."

The source said the woman alleged that the inappropriate behavior occurred while Lauer was in Russia covering the Winter Olympics in 2014.

Lack's memo said it was the first complaint lodged against Lauer in his career at the network. But it also said "we were also presented with reason to believe this may not have been an isolated incident."

Indeed, Lack and other NBC News executives have known for weeks that The Times and Variety magazine were working on investigations into Lauer's behavior.

Variety's New York bureau chief Ramin Setoodeh said on Twitter that he and his colleague Elizabeth Wagmeister have been doing reporting "about serious sexual harassment allegations against Lauer" for two months.

"NBC was aware" of the reporting, Wagmeister tweeted. "There are multiple women we've spoken to with far-ranging accusations against Lauer. The power of journalism has never been more evident with this cultural change."

A spokeswoman for Lauer said he has no comment at this time. Lauer may release a statement later on Wednesday.

Lauer's colleagues were visibly shaken up about the news on Wednesday's "Today" show. Guthrie, his co-host for the past five years, was told overnight about his termination.

"We were both woken up with the news kind of predawn," Guthrie's co-host Hoda Kotb said. "And we're trying to process it and make sense of it. And it will take some time for that."

Lauer is the latest high-profile man in media to be brought down by allegations of inappropriate sexual behavior. Just last week, CBS News fired one of its own morning anchors, Charlie Rose, after a report in The Washington Post chronicled years of alleged sexual misconduct on his part.

The torrent began when The New York Times and The New Yorker reported on allegations against the Hollywood producer Harvey Weinstein.

Since then, actors Kevin Spacey and Louis C.K. have been suspended or removed from projects after allegations against them became public. And other prominent journalists, including Mark Halperin of NBC and Michael Oreskes of NPR, have been fired or suspended from their jobs.

The firing of Lauer removes one of the most recognizable personalities on television at a time when morning news programs are increasingly important to network news divisions.

"This is a sad morning at 'Today' and NBC News," Guthrie said at the top of the 7 a.m. hour. "As I'm sure you can understand, we are devastated. I'm heartbroken for Matt."

Guthrie also said she was heartbroken for the woman who accused Lauer of misconduct, noting "it's long overdue" that women feel comfortable coming forward against abusive men.

Kotb, on the set with Guthrie, said she has known Lauer for years and "loved him as a friend and a colleague."

"It's hard to reconcile the man who walks in every day" with the person who was identified in the complaint, she said.

Lauer, 59, was named a co-anchor of "Today" in January 1997 after three years as the newsreader.

He co-anchored NBC's coverage of the September 11, 2001 terrorist attacks and other historic news events.

His contract calls for him to be paid tens of millions a year. It reportedly ran through 2018.