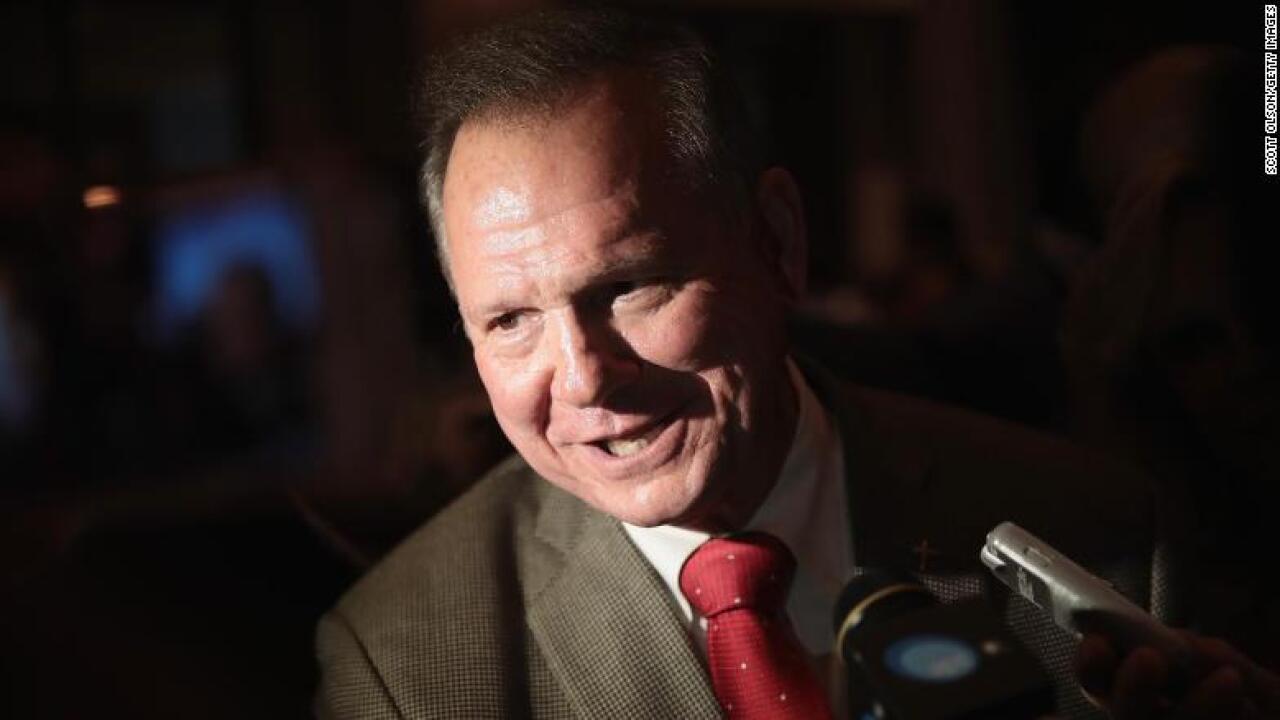 A Washington Post report alleges that Moore pursued romantic relationships with teenage girls, including a sexual encounter with a 14-year-old, when he was in his 30s. Moore denies the allegations, calling them “yet another attack on my character and reputation in a desperate attempt to stop my political campaign for the United States Senate.”

On Sunday, Treasury Secretary Steve Mnuchin said on CNN’s “State of the Union” that “it appears that there is a significant issue here that needs to be addressed,” adding that the allegations need to be investigated further.

When host Jake Tapper asked the secretary if Moore should step aside in the race based on the report, Mnuchin said, “if the allegations prove to be true, he should step down.”

Alabama Republican Gov. Kay Ivey’s office said she has no plans to move the December 12 special election to fill former Sen. Jeff Sessions’ seat with a permanent replacement; Sessions vacated the seat when he was confirmed as US attorney general.

Kellyanne Conway, a senior aide to President Donald Trump, said the behavior described, if true, is “disqualifying” on ABC’s “This Week.”

“The President and others in the Republican Party have made clear that if the allegations are true, this man should step aside,” she said. “But I’ve gone farther than that, and I’ve reflected something the vice president said as well, which is everybody should know that conduct is disqualifying.”

Conway did not say whether she believed the women who accused Moore.

“I also want to make sure that we as a nation are not always prosecuting people through the press,” she said. “He has denied the allegations. I have read the stories. I have heard not the testimony and the evidence, but what people are saying publicly.”

Another White House adviser, legislative affairs director Marc Short, told NBC’s Chuck Todd on “Meet the Press”: “I think there’s a special place in hell for those who actually perpetrate” such crimes, “and I think Roy Moore has to do more explaining than he has done so far.”

Short added: “There’s no Senate seat more important than the notion of child pedophilia, Chuck, I mean that’s reality. But having said that, he has not been proven guilty. We have to afford him the chance to defend himself,”

Sen. Pat Toomey, R-Pennsylvania, said Sunday that the GOP should consider supporting Luther Strange, the President’s choice in the Alabama Republican primary, as a write-in candidate. Strange, a former Alabama attorney general, was appointed to fill the Senate seat by former Gov. Robert Bentley in February, but lost the September primary to Moore.

“Luther Strange would be a strong candidate for a write-in,” he told “Meet the Press.”

“We’ve got a 40-year-old allegation that is unprovable, probably,” Toomey added. “And despite that, many of us are suggesting that the preponderance of the evidence seems to support the accuser and, therefore, many of us, I’ll speak for myself, would prefer for Roy to step aside. I think that’s a responsible way to approach this.”

Short agreed with Toomey’s analysis on the timing of the allegations.

“The people in Alabama know Roy Moore better than we do here in D.C., and I think we have to be very cautious, as Senator Toomey said of allegations that are 40 years old that arise a month before Election Day,” he said.

White House press secretary Sarah Sanders said in a statement Friday that Trump “believes we cannot allow a mere allegation, in this case one from many years ago, to destroy a person’s life.”

“The President also believes that if these allegations are true, Judge Moore will do the right thing and step aside,” Sanders said.

Ohio Gov. John Kasich, a Republican, told CNN’s “State of the Union” that “of course” Moore should step aside.

“I think he should step aside,” he said. “If not, maybe you can get a write-in candidate.”

On CBS’s “Face the Nation,” Sen. Tim Scott, R-South Carolina, said the allegations “are very, very strong.”  ”The denial was not as strong as the allegations,” he said, adding that “if the allegations are true, there’s no doubt that he should step aside.”

Also on “Face the Nation,” Sen. Bernie Sanders, a Vermont independent, said he believed the accusations.

“I think you can reach the conclusion that what this gentleman did was totally inappropriate and not the kind of behavior that a United States senator should have,” he said.

And Sen. Dick Durbin, D-Illinois, said the President should further weigh in on the situation.

“President Trump is the leader of the Republican party in America. It’s his responsibility to step forward and say more and do more when it comes to this situation in Alabama,” Durbin said.

“I just saw a news report out of a Birmingham television station where they went into a neighborhood outside of Birmingham, a suburban neighborhood, that, actually, Roy Moore lost to Luther Strange in the primary, and they couldn’t find a single person who believed any of this,” the CNN commentator said on “State of the Union.”

Santorum added that Moore’s predicament would be solved if he stepped down and was replaced by another Republican, but he doesn’t think Moore is likely to do so.

“Look, if I was a candidate under these circumstances, given what was going on, and I cared most about my country and the policies that I wanted to get accomplished, of course I would step back,” he said. “I can go down a long laundry list of Senate candidates that I have had this discussion with over the last 20 years. And they all stick it out … and they end up losing.”

Former Gov. Jennifer Granholm, D-Michigan, said the situation, and specifically some Republicans saying they would stick with Moore even if the allegations are proven true, “disturbs” her.

“I mean, are we really at the point where people in Alabama, because they don’t want to be perceived as bowing to the national media, are going to choose somebody who has been a child molester of a 14-year-old girl over someone who has been a career prosecutor who happens to be a Democrat?” she asked. “I hope to God we are not in that place(.)”