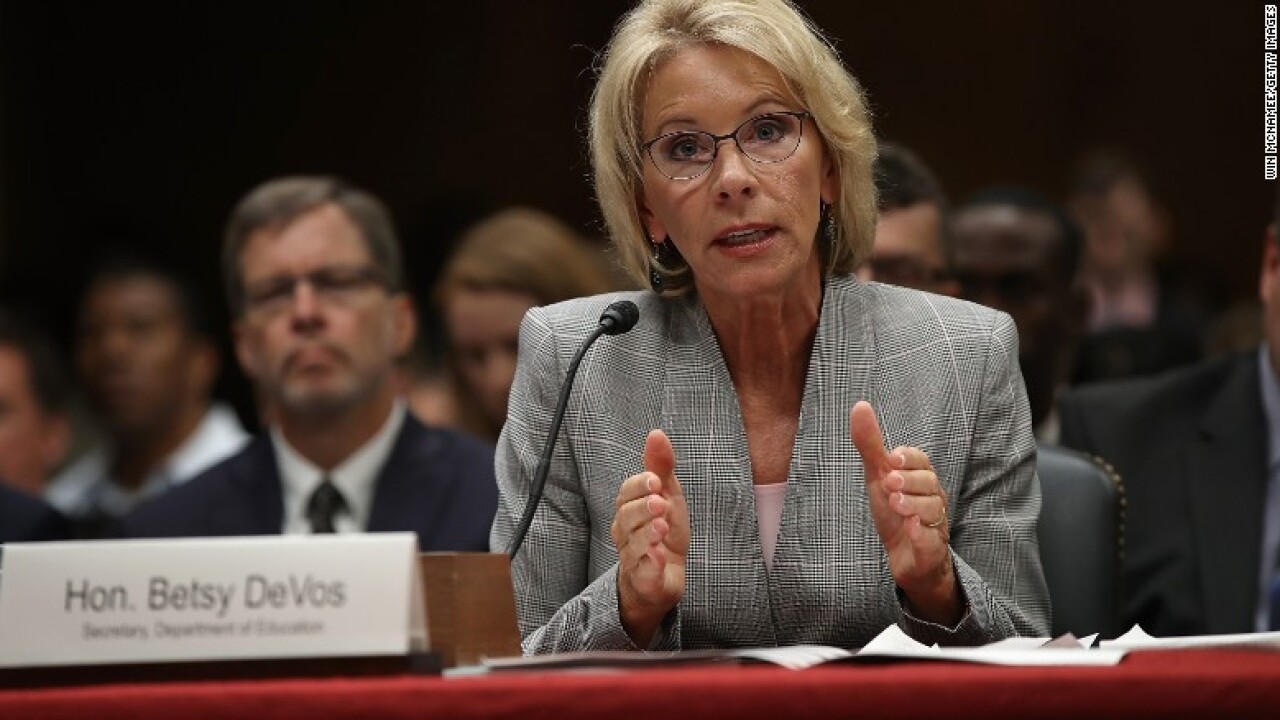 The Education Department announced Friday it is formally rescinding Obama-era guidance on how schools should handle sexual assaults under Title IX federal law.

Education Secretary Betsy DeVos announced earlier this month that her department was concerned that previous guidance denied proper due process to those accused.

As part of the interim guidance, the department released a Q&A outlining recommendations on how schools should respond, including guidance on what schools are obligated to do in response to allegations and their flexibility in establishing their own procedures.

The administration is formally withdrawing the Obama administration’s “dear colleague letter” that some, including DeVos, have criticized for going too far. The standard for proof has been raised for school disciplinary proceedings in some instances, as different schools have different policies.

One aspect of the Obama-era guidance that remains is the responsibility of the school to investigate, rather than leave the matter to law enforcement.

Title IX is a federal law that prohibits discrimination based on sex for schools and programs that receive federal funding, including protection from sexual harassment.

The announcement quickly received backlash from advocacy groups and lawmakers.

Shameful. This decision will hurt and betray students, plain and simple. https://t.co/b2syuMM4ma

Vermont Independent Sen. Bernie Sanders called on Congress to respond to the move.

“This is a disgrace and a disservice to everyone who has worked to address sexual violence. Congress must act to undo this terrible decision,” the senator tweeted.

This is a disgrace and a disservice to everyone who has worked to address sexual violence. Congress must act to undo this terrible decision. https://t.co/OcuJez0Gff

“Betsy DeVos and Candice Jackson’s intentions are clear: to protect those who ‘grab’ by the genitals and brag about it — and make college campuses a safer place for them,” Sofie Karasek, director of education and co-founder of End Rape on Campus, said in a statement. Jackson is the head of the civil rights division within the Education Department.

Earlier this week, former Vice President Joe Biden was featured in a three-year anniversary video for “It’s On Us” — the group he co-founded with President Barack Obama aimed at curbing sexual violence on college campuses.

In the video, Biden warned against “new challenges” in combating campus sexual assault.

“You may have heard the progress we made, the additional protections we put in Title IX, which is now the law, that protects students from sexual discrimination — that includes sexual violence,” Biden says in the video. “Now the Department of Education under new leadership is working to roll back the protections under Title IX that we worked so hard to put in place.”

However, some applauded the department’s announcement.

“The campus justice system was and is broken,” Foundation for Individual Rights in Education (FIRE) Executive Director Robert Shibley said in a statement. “Fair outcomes are impossible without fair procedures. When the government sprang its 2011 letter on colleges and students without warning, it made it impossible for campuses to serve the needs of victims while also respecting the rights of the accused. With the end of this destructive policy, we finally have the opportunity to get it right.”

FIRE is a free speech and student right’s organization that has repeatedly criticized the Obama administration’s policy.

“The withdrawn documents ignored notice and comment requirements, created a system that lacked basic elements of due process and failed to ensure fundamental fairness,” a Department of Education statement reads.

“This interim guidance will help schools as they work to combat sexual misconduct and will treat all students fairly,” DeVos said in a release. “Schools must continue to confront these horrific crimes and behaviors head-on. There will be no more sweeping them under the rug. But the process also must be fair and impartial, giving everyone more confidence in its outcomes.”