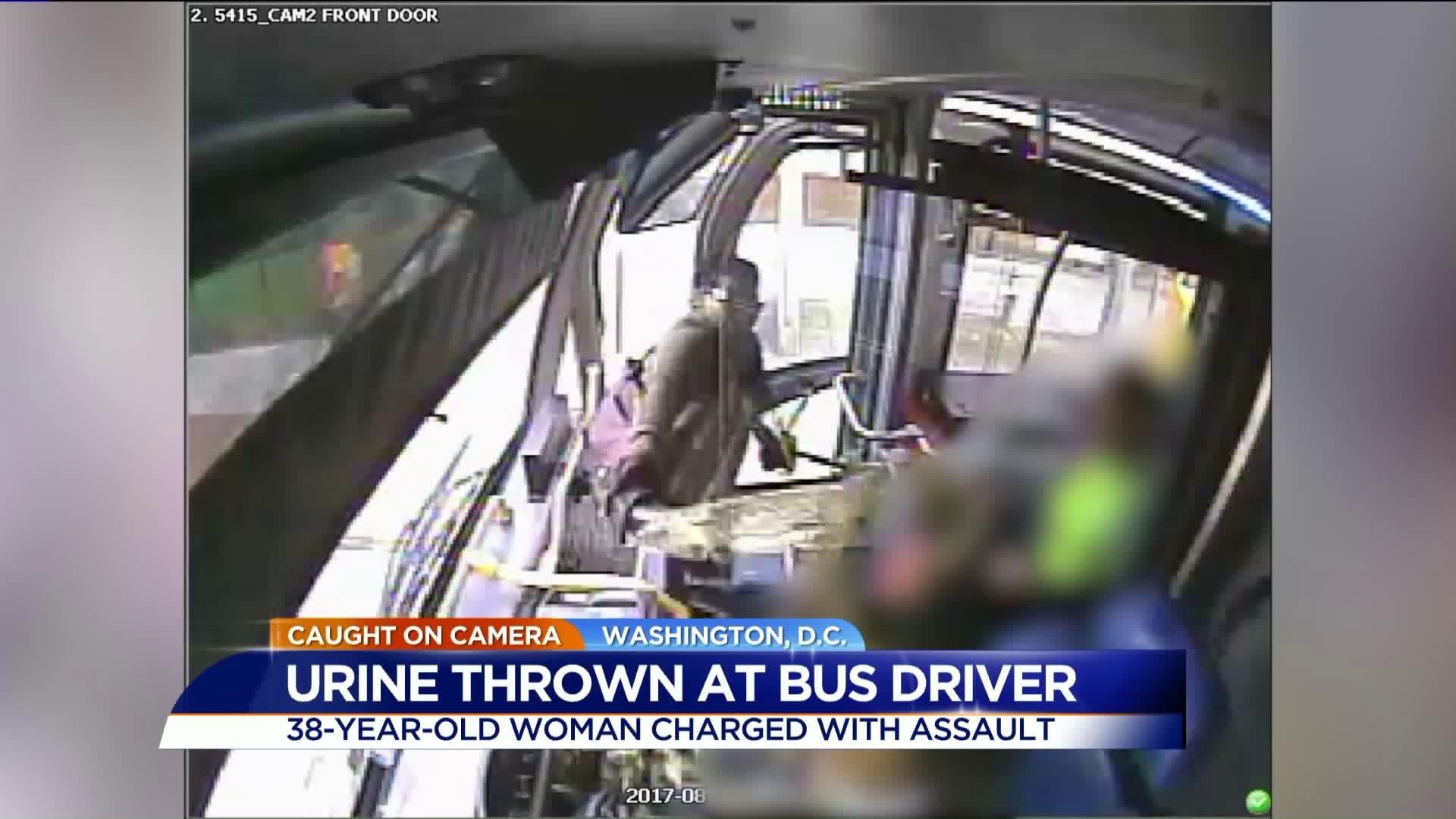 WASHINGTON, D.C. – Some Metrobus riders faced major delays Friday morning after drivers on one line requested a ride along from a police officer or supervisor following an incident where a woman threw a cup of urine at a driver last weekend.

Video from the bus showed a woman standing up front when she opened a cup while waiting for the bus to stop around 6:15 p.m. Saturday.

As the suspect was leaving, police said the driver told her to have a nice day.

The suspect the replied, "Are you talking to me?"

The video then shows her tossing the urine at the driver's head before running off the bus.

Opal Brown, 38, turned herself in on Wednesday, a day after the surveillance video was released.

The U.S. Attorney’s Office charged her with misdemeanor assault and was she was released on personal recognizance with a status hearing set for 9:30 a.m. on Sept. 28.

A judge ordered her to stay away from the driver and the X2 Metrobus line as well as report to the court’s Mental Health Urgent Care Clinic for an assessment, WDCW reported.

As a result of the incident, the X2 line was taken out of service and passengers were forced to use alternative routes Friday morning.

The president of the union representing operators, clerical and maintenance workers for WMATA said Metro's response did not make sense.

“What did metro do instead of riding with them, they took them out of service. They are going to discipline them for saying you are not keeping me safe,” ATU Local 689 President Jackie Jeter said.

However, Metro claimed the drivers were refusing to operate the buses.

The union took a stance at the Minnesota Avenue Metro Station in light of the incident involving their colleague earlier this week.

“The lady reached around the bus shield," Carroll Thomas said. "The urine got in the operator’s mouth. The operator is so depressed, so down."

The union said the shields are not doing enough and that laws should be tougher.

“ATU Local 689, the union representing Metrobus Operators, is currently engaged in an unauthorized and potentially unlawful labor action that is significantly impacting riders on the X2 line. The stated goal by union leadership is to draw attention to safety concerns, specifically bus operator assaults, following an incident on Saturday. This is a subject on which Metro and the union agree: Absolutely no one should be assaulted simply for doing their job. However, we disagree with impacting Metro customers who are simply trying to get to work and school by Metrobus Operators refusing to provide bus service in a disruptive and unlawful job action.

Metro and the union also agree that laws need to be strengthened to help protect bus operators, including enhanced penalties for anyone who assaults a frontline transit worker.

We should note that, working with the Union, Metro has taken several steps to address the issue of bus operator safety. For example, Metro Transit Police now have nearly 40 Transit Police officers specifically assigned to Metrobus. These officers are embedded with our bus operators at Shepherd Parkway and Northern bus divisions with the goal of sharing information with operators about where problems are being encountered. Additionally, more than a third of Metrobuses have now been equipped with protective shields and all new buses will arrive from the factory with a safety shield already installed. In addition, every Metrobus has been equipped with digital cameras that are always recording, as well as communication equipment that allows the operator to call for help with the push of a button.”

Metro Transit Police Chief Ronald A. Pavlik Jr. said it is unrealistic to have officers on every Metrobus when there are thousands of them.

Union representatives said Metro is being dishonest when they say they are working with them to discuss the issues of bus operator safety and their fight for better protection will continue.