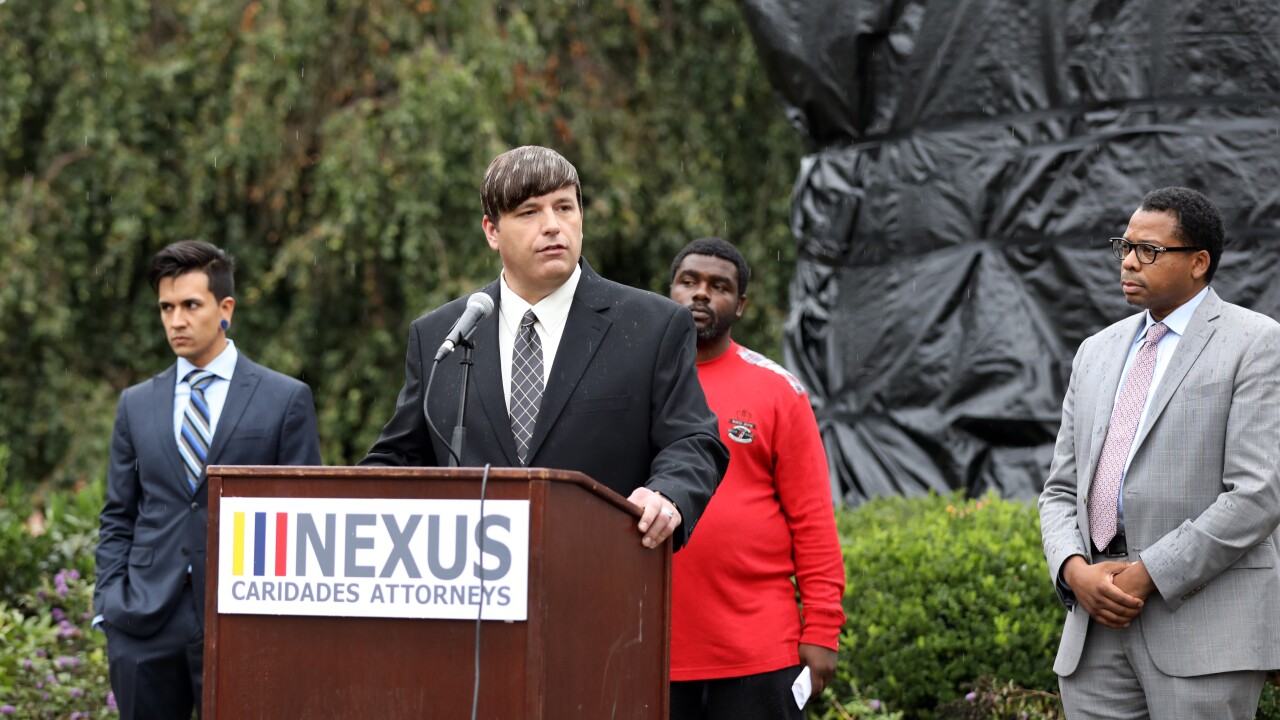 CHARLOTTESVILLE, Va. — A lawsuit has been filed against municipal and state officials by a man who said police officers failed to keep him safe on Aug. 12 during the Unite the Right rally.

Robert Sanchez Turner, 33,  is represented by Nexus Caridades and the civil action suit is funded by Nexus Services Inc.

Turner said he was assaulted by white supremacists in Charlottesville, and that law enforcement failed to keep him safe.  The suit alleges that the defendants enabled hate crimes that occurred throughout the city and that the plantiff’s Constitutional right under the 14th Amendment were violated.

“By commanding their subordinates to stand down while hundreds of white supremacists and their sympathizers assaulted and seriously injured counter-protestors, these Defendants were essentially accessories to, and facilitators of unconstitutional hate crimes,” reads the preliminary statement of the suit.

“What happened in the city should not happen in a modern American city,” said Nexus CEO Mike Donovan, speaking at Friday’s press conference, which was held at Emancipation Park, the site of the original rally.

This time, behind the speakers the statue of General Robert Lee was covered in a black tarp. The Unite the Right rally was organized by Jason Kessler on Aug. 12, and brought thousands to the streets, along with counter protesters, beginning the night before.

Leaders have continually said in the face of widespread public criticism that there was no stand down order.

“It is quite obvious that they were commanded not to do something,” Donovan said. “We want to know why you stood down.”

The lawsuit also references a confidential memo dated Thursday, August 24, to City Manager Maurice Jones, in which City Council demanded an explanation for the “apparent unwillingness of officers to directly intervene during overt assaults captured in many videos.”

Mario Williams, civil rights chief at Nexus, said that the lawsuit is also on behalf of every person regardless of race, regardless of affiliation, who experienced a beating, a physical assault, while police stood by and didn’t do anything and also didn’t try to apprehend the assaulters.

He said that Constitutional rights of every person there were violated.

“You can’t tell us there was no stand down order when there is tons of video and eye witness who said they were beaten while police did nothing,” Williams said.

Turner addressed the media with a statement and said he was peacefully demonstrating when he was attacked.

“I’m eager to get answers — I think every in the city and across the country deserve answers from the city,” Turner said. “Why did rioters attack innocent people? Why did the police stand down and watched as I was attacked?”

He said he witnessed people hit by rocks, bottles of water and urine. “I witnessed it and I was also one of the people hit,” Turner said.

“I am here standing up, because it is what I have to do,” Turner said.

Turner said that he suffered neck and head pain from being hit by canes and bottles and blurred vision from being exposed to tear gas.  Turner said some bottles were filled with cement. The suit alleges that officers were within 10 feet of the assault and didn’t do anything to stop or apprehend Turner’s assailants.

The chaos also turned deadly when 20-year-old James Fields Jr.  drove his car through a crowd on the downtown pedestrian mall and killed 32-year-old Heather Heyer. There have been multiple criticisms made that the street Fields drove down was supposed to be closed down during the rally.

“There are a lot of people who will never forget what they went through that day,” said Wiliams said. “History is defined by the people who stand up and speak out.”