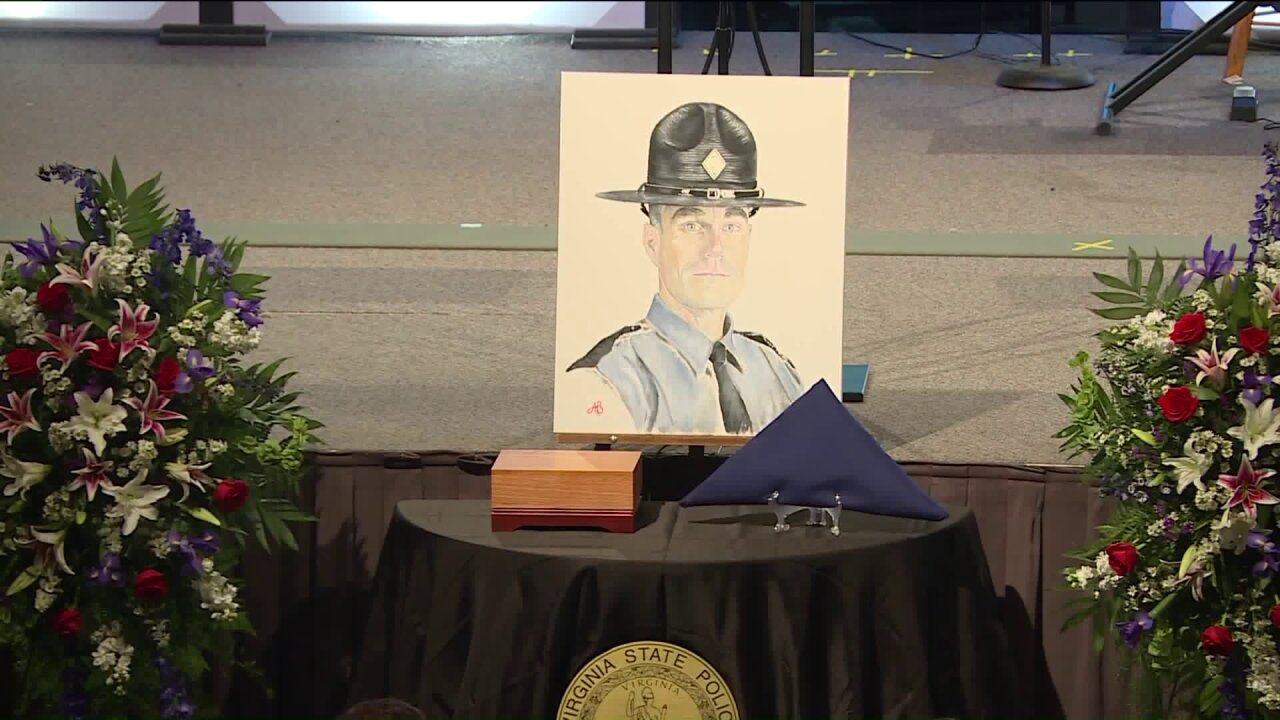 Lt. Cullen and Trooper-Pilot Berke M.M. Bates were killed last Saturday when a Virginia State Police helicopter crashed into a wooded area near a home on Old Farm Road outside Charlottesville, Virginia.

The Virginia State Police helicopter was flying over the Charlottesville-area assisting with public safety at the “Unite the Right” rally.

Cullen’s  funeral will be begin at 10 a.m. at Southside Church of the Nazarene. The burial will be a private graveside service.

Cullen is survived by his wife and two sons.

Law enforcement from around USA are again gathered to say goodbye to a fallen officer. Funerals held back to back so travelers could attend.

“He [Cullen] listened more than he talk. And when he did speak, it was thoughtful, it was precise, it was relevant, it was meaningful.” pic.twitter.com/bOFeiP9UWo

RIGHT NOW: @TerryMcAuliffe says 'I knew him very well…Jay flew me and family for the last 3 and a half years' during Lt. Cullen funeral pic.twitter.com/MZtwGAxHMD

Lt. Cullen graduated from the VSP Academy in May 1994 as a member of 90th Basic Session. He joined the VSP Aviation Unit in 1999. RIP. pic.twitter.com/dyfixykA3B

'He was never one to take shortcuts…he was a leader and led by example.' VSP Superintendent Flaherty says about Lt. Jay Cullen pic.twitter.com/8TH6x6wn4S

“It'’s fair to say Jay wouldn’t have been anywhere else Saturday, for many reasons. He believed it was his mission to protect &serve.” pic.twitter.com/KUDb4XWgRs

Cullen is survived by wife Karen & 2 sons. 1st Sgt. Clark addresses wife and asks her to lean on ppl gathered today "as they leaned on Jay."

"Jay [Cullen] fell in love with VSP. And he did it like he did everything 'pedal to the medal.' He started at bottom and worked his way up"

'I thank you for the sacrifices you made to keep communities & children safe,' Will Payne says to Lt. Cullen's family. Friend for 30 years pic.twitter.com/fG1nPOiwd8

Our thoughts and prayers yesterday and today are with the loved ones of Jay Cullen and Berke Bates, who died serving Cville. Rest In Peace.

The Rev. is talking about how Cullen's wife first got a chance to meet the "hot police officer" who lived in the apt. building.

She asked for his help to get a Christmas tree in the door, but he didn't have a saw, so he used a steak knife to cut limbs off it. <3

Wow. Cullen's wife says her and Jay never had a fight. More because of his temperament, not hers. Says they were soul mates. <3

The governor will present the flag to Trooper Cullen's wife. Bagpipers will also perform. https://t.co/1VAKysAhFt pic.twitter.com/QGwbD9Bq5e

Speaker: Jay ‘took a stand between us and evil’

Family and friends gathered for a prayer vigil Wednesday evening to remember one of the two Virginia State Trooper killed when their helicopter crashed in Charlottesville Saturday.

Those loved ones said Lieutenant Jay Cullen died doing what he loved and that he made the ultimate sacrifice for the community he served.

“Jay every day when he put on that uniform, he took a stand between us and evil,” said one speaker.

Dozens of family members, friends, and neighbors stood in solidarity, stretching across the lawn of a Chesterfield home to show their support for a grieving family going through a devastating loss.

Chad Kannon has known the Cullen’s for years and was good friends with Jay.

“We were pretty shocked a stunned,” Kannon said upon hearing the news.

Kannon described Cullen as a big family guy, who was a great father and great husband.

He said Cullen wasn’t even supposed to be working Saturday, but stepped in to do his part to help.

“From what we find out now. It was his day off he wasn’t even supposed to be up there. They asked him to come up and patrol and that makes it even worse,” he said.

She said her family has felt and appreciates the outpouring of love and support from the community.

During the vigil, Cullen’s wife Karen, their two sons and close family members sat on the porch.

A family friend read a statement from Karen Cullen:

“Jay Cullen was a wonderful man, outstanding husband and devoted father. He was a great son, a true friend and dedicated trooper,” the letter read. “Jay was our world. For our sons Ryan and Max, Jay was a dad and a best friend. He was my soulmate and best friend as well.”

Karen Cullen then addressed the crowd in front of her, thanking them from the bottom of her heart for being there for them.

That outpouring of support is on full display with blue and black bows lined up throughout the neighborhood and blue lights illuminating the front steps of each home.

“That’s how strong we are,” said Kannon. “This little area in the community here is strong, what happens to one of us we all know about it.”

Blue light and black bows in the Cullen’s neighborhood.