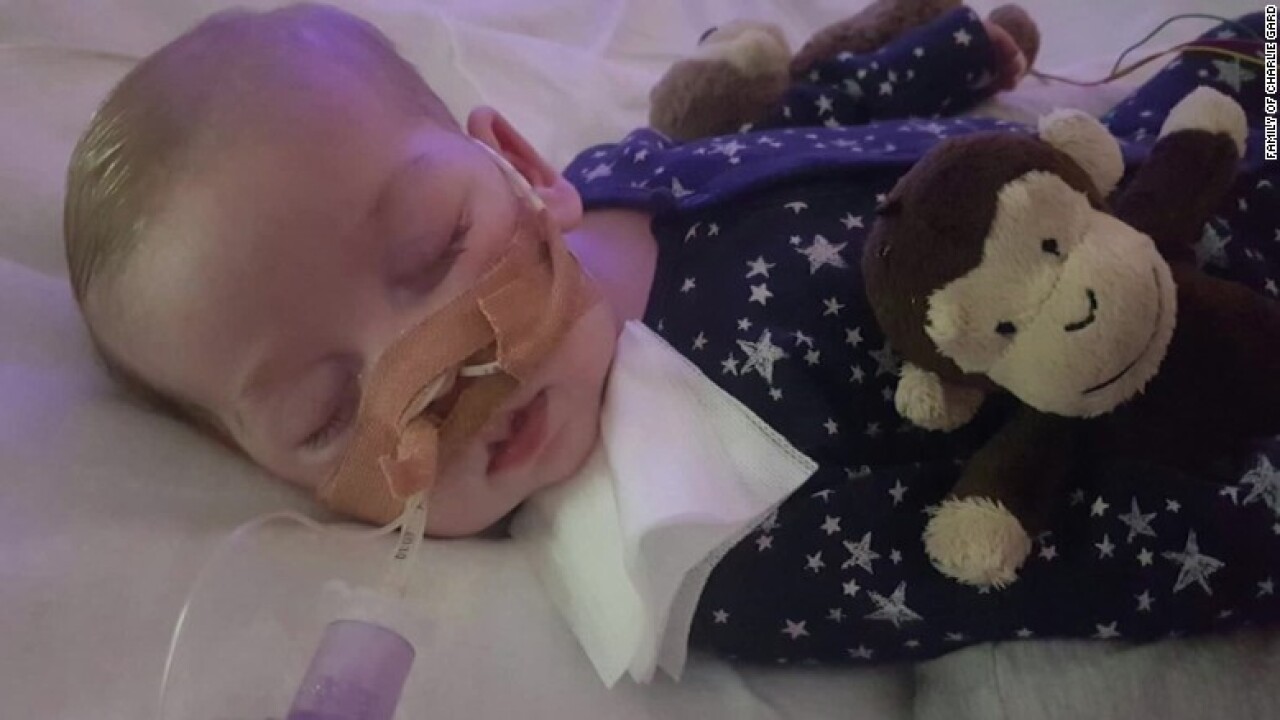 British baby Charlie Gard, who was at the center of a legal battle that captured the world’s attention, died Friday, one week before his first birthday.

“Our beautiful little boy has gone, we’re so proud of him,” his mother, Connie Yates, said in a statement.

Charlie was born on August 4, 2016, seemingly healthy. But two months into his short life his parents noticed his health was declining. They took him to London’s Great Ormond Street Hospital for Children in October where he remained at least until Thursday.

“Everyone at Great Ormond Street Hospital sends their heartfelt condolences to Charlie’s parents and loved-ones at this very sad time,” the hospital said in a statement Friday after learning Charlie had died.

He was diagnosed with mitochondrial DNA depletion syndrome, a rare inherited condition that causes muscle weakness and loss of motor skills. Charlie was the 16th person to ever be diagnosed with the disease, according to his parents.

As the disease progressed, Charlie became weaker, losing the ability to move his arms or legs or breathe, and he experienced seizures. He was then placed on a ventilator that was breathing for him.

Through their own research, Charlie’s parents, Chris Gard and Connie Yates, found a doctor in the United States doing research on an experimental treatment called nucleoside bypass therapy who was willing to treat Charlie.

The doctor, Michio Hirano of New York’s Columbia University Medical Center, specializes in myopathies and other neuromuscular diseases. He was not identified until July under court order.

The treatment used as part of Hirano’s research has only been used on a couple of patients with a less severe form of the disorder.

At the end of January, Charlie’s parents launched a GoFundMe page to raise money to bring Charlie to the United States for that treatment. In three months, they exceeded their £1.3 million ($1.65 million) goal to cover the costs, but the hospital stepped in and opposed this effort, stating that it was not in the best interest of their patient.

In February, the hospital decided, based on Charlie’s status, that treatment was unlikely to benefit Charlie. Unable to agree, the hospital went to court to have a judge decide, hoping to be able to remove Charlie from life support.

What could have been a private loss quickly turned into an international court drama.

In April, the UK High Court ruled that it was in the infant’s best interest for his treating clinicians to remove the ventilator keeping him alive. That decision was then backed by the European Court of Human Rights in June, which ruled not to intervene in the case. This was upheld by a British Supreme Court decision that the hospital could discontinue life support to Charlie and he could not be transferred to the US or elsewhere.

The emotional case then went to the UK High Court last week after the hospital requested another hearing to consider “new evidence relating to potential treatment for his condition.”

That new evidence, came in part from Hirano who testified that there was an 11% to 56% chance Charlie could show clinically significant improvement if treated. Hirano came to London, evaluated Charlie and spoke with those who had been treating him and other experts.

The world was watching

Charlie’s story and his parent’s fight caught the attention of world leaders near and far, including UK Prime Minister Theresa May, who supported the hospital, while Pope Francis tweeted his support for Charlie’s parents.

US President Donald Trump weighed in, too, offering assistance to the family. Pro-life campaigners and right-wing politicians from both sides of the Atlantic seized the opportunity to chime in.

The case resurfaced a decades-old debate over euthanasia and the use of life support, issues that have been fought in most corners of the world and that have often seen medical and religious arguments collide.

Doctors and staff at the Great Ormond Street Hospital were subjected to a “shocking and disgraceful tide of hostility and disturbance,” in the street and online, the hospital said.

On Monday, Charlie’s parents gave up their fight to take Charlie to the US after new brain and muscle scans revealed their son had deteriorated and was therefore less likely to benefit from the experimental treatment, while his doctors and parents battled in court. Too much time had passed.

But the court battle was not over yet. The hospital and parents found themselves in court once again this week. This time, Charlie’s parents argued for the right to bring Charlie home from the hospital to die rather than the hospital or hospice. The hospital argued there were too many obstacles including the unwillingness of any care provider to accompany Charlie. The disagreement focused on whether Charlie’s ventilation tubes should be withdrawn in the hospital, in the hospice, at home soon after transfer or at home after a period of days.

On Thursday, with the hospital and Charlie’s parents still at an impasse, the judge’s order to remove life support and move Charlie to hospice took effect.

“We just want some peace with our son, no hospital, no lawyers, no courts, no media, just quality time with Charlie away from everything to say goodbye to him in the most loving way,” Yates said in a statement after the judge’s order was given.

“Mummy and Daddy love you so much Charlie, we always have and we always will and we are so sorry that we couldn’t save you. We had the chance but we weren’t allowed to give you that chance. Sweet dreams baby. Sleep tight our beautiful little boy,” Charlie’s parents said in a statement after they gave up their fight. They called Charlie their hero.