Celebrities rally to give birthday wishes to bullied boy 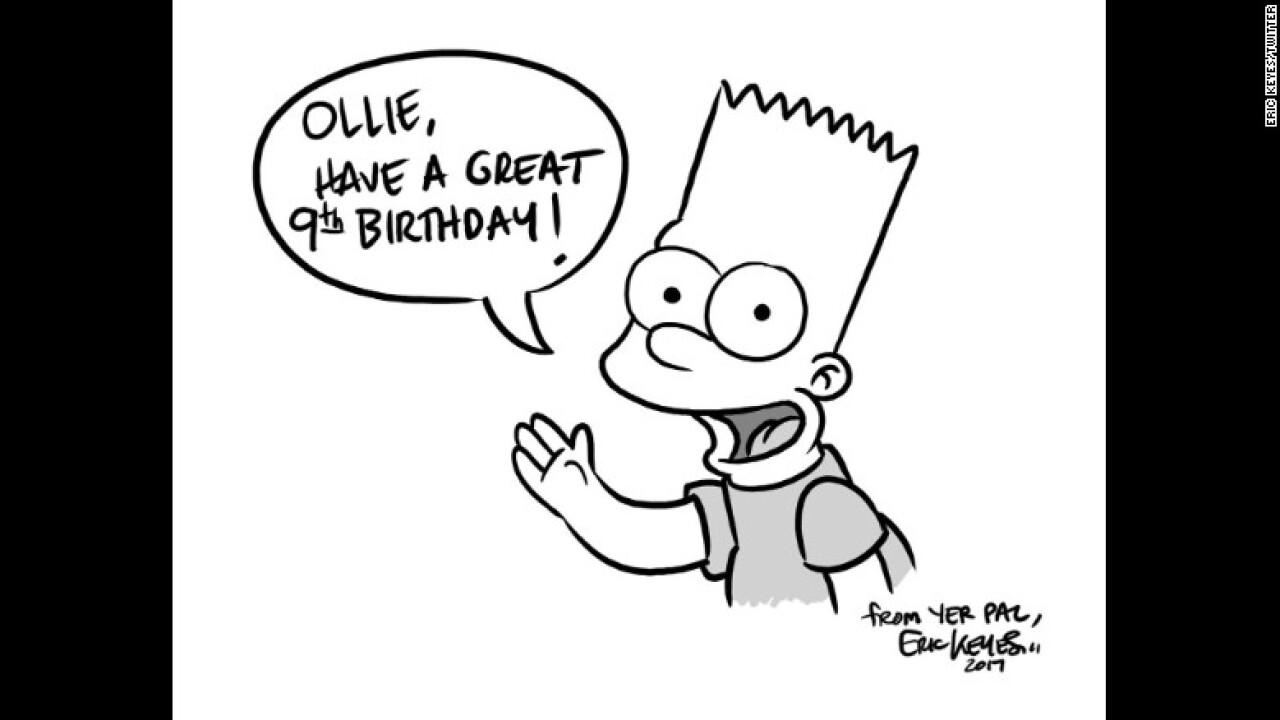 Eric Keyes, a character designer for “The Simpsons,” chose to illustrate his birthday wish for a UK boy.

Eric Keyes, a character designer for “The Simpsons,” chose to illustrate his birthday wish for a UK boy.

LEEDS, England — Birthday wishes from adoring relatives are great, but a message from Bart Simpson? That’s a whole new level of cool.

A collection of actors, athletes, entertainers and other celebrities offered birthday greetings on Twitter to one young boy from Leeds, England.

Chris Hope-Smith, the boy’s father, tweeted a request for anyone famous to send his son Ollie a positive message on his 9th birthday. He wrote that Ollie had been bullied, saying he “just would love someone to tell him he does mean something.”

Strange request. Anyone know anyone famous/well known who could send Ollie a positive/9th birthday message. The bully keeps saying to him

Hope-Smith first posted his appeal early Thursday. By Friday afternoon, his tweet had already reached over 14,000 retweets and 34,000 likes — not to mention an array of celebrities and organizations around the world who answered his call. The reaction is sure to be a surprise for Ollie, whose birthday is Wednesday.

Ollie! Happy birthday! 9 years old is a fun age! I hope your day was all that you dreamed. Shoot for the stars and always be kind. ✨🎂 xx

Other replies came from a wide variety of supporters, including Westminster Abbey, authors, British TV personalities and several UK soccer teams. He even got a serenade from an astronaut.

Happy birthday Ollie from all at Westminster Abbey. Remember: the angels are on your side. 🎂🎶😇👼 pic.twitter.com/ABROBg3LSp

And on top of the messages, the birthday boy is scoring some pretty sweet deals. Olympian Tom Bosworth, also from Leeds, offered to meet Ollie and hook him up with a Team Great Britain kit. Puffin Books, a prominent children’s book publisher, is sending a hefty stack of novels his way.

DM me your private details and maybe on his birthday I can meet you guys and give Ollie some Olympic team GB kit?

Ollie is sure to have a busy schedule for the next few months, too. England’s national soccer team invited him to a game, and Wales Comic Con is giving him VIP tickets.

Fancy coming to see us in September? Let us know and we'll make it happen. 👍

Hoping Ollie has a great day and a wonderful year from us all – We'd also like to gift him some VIP tickets to the event this Xmas! 🎅🏻

Ollie’s father could not be reached for comment. He probably has his hands full responding to his son’s new fans.