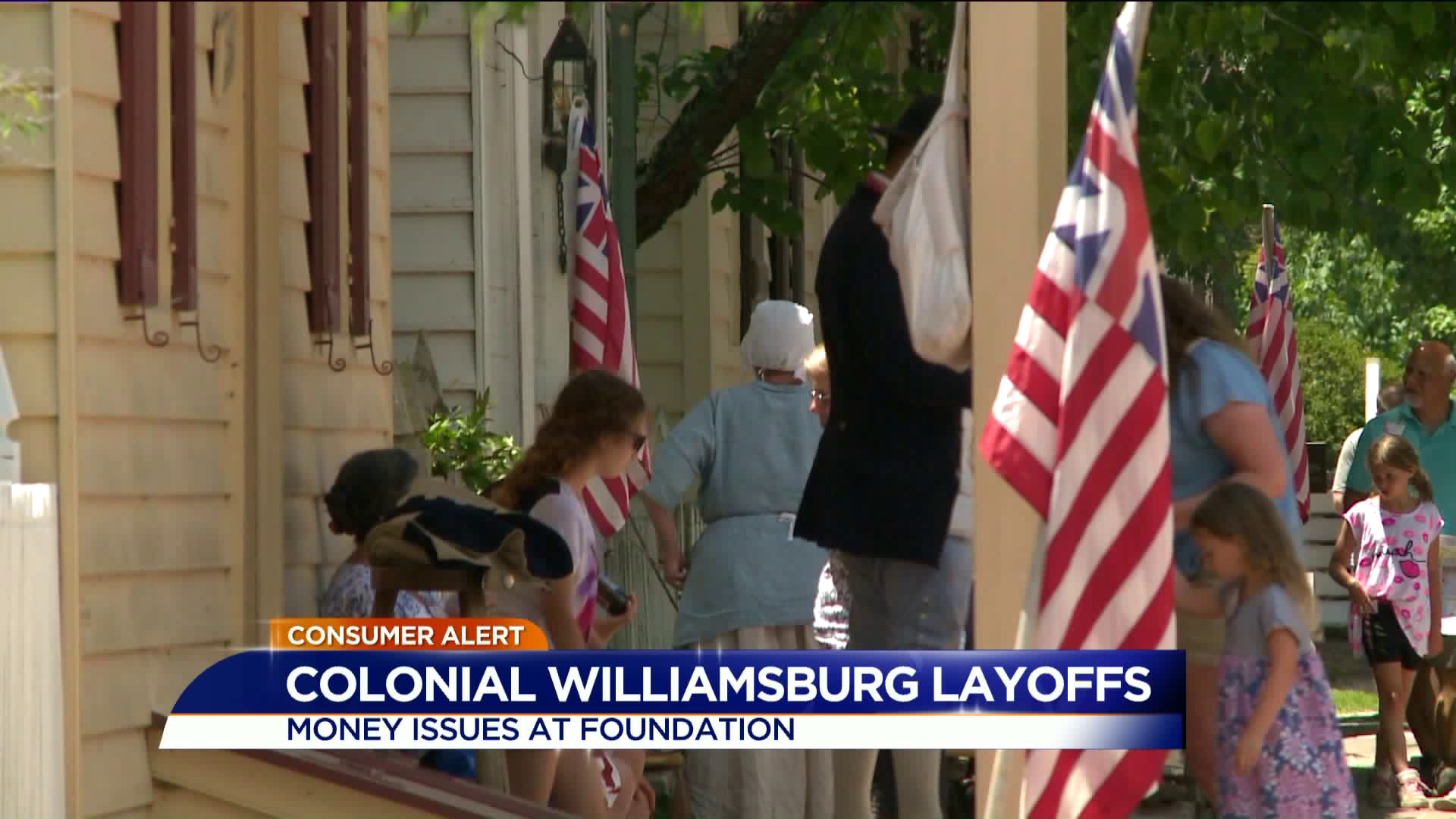 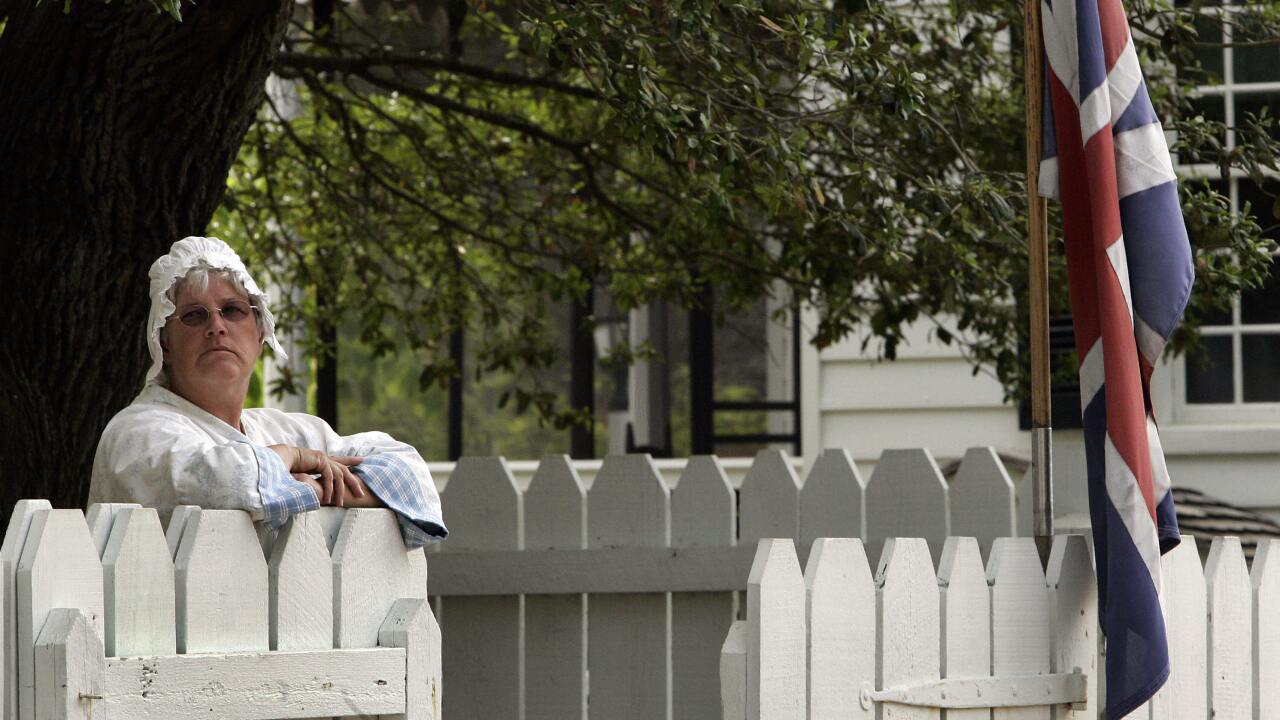 WILLIAMSBURG, Va. -- The President and CEO of the Colonial Williamsburg Foundation announced "difficult decisions" were made in an effort to keep the historic tourist attraction up and running. In addition to cutting budgets in all departments, Colonial Williamsburg will begin outsourcing jobs it once handled itself.

"The Foundation will be outsourcing our golf operations, our retail stores, much of our maintenance and facilities operations, and our commercial real estate management. As we've entered into these outsourcing agreements, our primary consideration was that our employees be treated fairly and respectfully," Mitchell B. Reiss wrote in an open letter to the Colonial Williamsburg Community. "After a series of tough negotiations, we have required each vendor to retain every employee in these four areas for at least one year. If employees in these four areas decide to join their new employer or if they decline to do so, they will receive a generous severance payment from the Foundation."

Reiss said part of their money woes stemmed from a sharp decline in attendance.

"For a variety of reasons – business decisions made in years past, less American history being taught in schools, changing times and tastes that cause us to attract half the visitors we did 30 years ago – the Foundation loses significant amounts of money every year," Reiss said. "In fact, in 2014, we lost a total of $62 million, or $176,000 every day. This is not acceptable, and it is not sustainable."

"We compounded these large annual losses by borrowing heavily to improve our Hospitality facilities and Visitor Center in the years leading up to Jamestown’s 400th anniversary in 2007," he said. "For a variety of reasons, the Foundation did not realize adequate financial returns on these investments. By the end of 2016, our debt burden stood at more than $300 million, with due dates for repayment coming very soon."

Colonial Williamsburg had been taking money from its endowment to stay in business, but Reiss said drastic changes needed to be made.

Employees who lose their jobs will be given "generous severance and unprecedented transition services," he said.

"Even though I am confident that these actions will return the Foundation to financial stability and allow us to continue to share America’s enduring story, there is no denying that this is a very tough day," he said. "If there was any other way to save the Foundation, I would eagerly have taken it. But there isn’t. For the first time in years, we now have a detailed, comprehensive plan – and an opportunity – to return the Foundation to stable financial health."

The following Questions and Answers were provided by Colonial Williamsburg

Why is the restructuring necessary?

The Foundation faces serious financial challenges. In 2016, we suffered operating losses of $54 million – or $148,000 per day. While that’s down from the $176,000 we lost in 2014, we’re still regularly losing an amount of money that’s not sustainable. These losses over the last decade have resulted in the Foundation drawing down its endowment to the point the funds available to cover operating losses could be exhausted in as little as eight years.

This is unacceptable and it is unsustainable.

How much will the Foundation save with the restructuring?

The immediate goal of the restructuring is to stabilize the Foundation’s finances so that we will no longer need to make excess withdrawals from our endowment to cover operating losses. We believe that with the plan we are implementing, we can achieve that goal by 2019. When the restructuring plan has been fully implemented, we expect financial improvement in the tens of millions of dollars, which will allow us to stop making excess endowment withdrawals and to reinvest in our core mission.

What is the effect of the restructuring on the Foundation’s employees?

As part of a comprehensive plan to stabilize Colonial Williamsburg's finances so we save this treasure and continue its core mission, 71 people will be leaving the Foundation by the end of the year. Another 262 employees will be moving, if they so choose, to work for the companies we have contracted with to manage the operation of the Foundation’s retail and golf facilities, landscaping and facilities maintenance.

Those companies have agreed to hire and retain eligible employees for at least the next year. The Foundation negotiated this provision into the outsourcing contracts. Employees departing this month will receive a generous severance package, an additional month of health care, and a variety of transition services offered in partnership with national HR experts at Lee Hecht Harrison.

How were the restructuring decisions made?

The restructuring plan was developed and prepared by President and CEO Mitchell Reiss, working with members of the Board of Trustees, senior management and expert
outside advisors, many of whom lent the Foundation their time free of charge.

Reiss presented the plan to the Board, which unanimously endorsed it at its April meeting.

What functions are being outsourced to outside agencies? Who are the agencies?

We are in final negotiations to have the following operational functions managed by outside companies. They have agreed to hire our staff and retain them for at least one year:

How will the Foundation measure the success of this plan?

Success will be measured two ways. First, there is the essential financial aspect to the plan -- it has to place the Foundation on a stable and sustainable financial pathway. But financial sustainability is only a means to a more important end. Second, the plan also has to allow us to renew our commitment, and devote more time, attention and resources, to supporting and enhancing our core mission.

How much money did CWF lose last year? Last 5 years?

The Foundation lost $54 million from operations in 2016, and $277 million over the past five years. In addition, in 2016 the Foundation paid $17 million servicing its debt.

What steps were taken to preserve jobs?

Even though the Foundation faces serious financial challenges, we have done everything possible to keep layoffs to a minimum. We found positions elsewhere in the Foundation for 22 employees whose current positions are being eliminated as part of the restructuring.

In addition, we negotiated with the outsourcing firms that will be taking over certain operations to employ and retain 262 qualified employees for at least a year. It is important to note that we avoided any layoffs in our customer-facing, front-line Historic Area interpretive staff.

Is the Foundation’s leadership taking pay cuts as part of the restructuring?

The senior team’s pay has been frozen for the past three years. There are also fewer senior leaders at the Foundation today than three years ago.

How is the Foundation helping those who are losing their jobs?

Regrettably, some employees will be leaving the Foundation as part of this critical effort to stabilize the Foundation’s finances for the long term. No one likes to see a colleague or a neighbor lose his or her job. It’s upsetting. It’s painful. We are committed to making this transition as easy as possible for those who are leaving.

Employees departing this month will receive an additional month of health care and all employees will receive a generous severance package and a variety of transition services offered in partnership with national HR experts at Lee Hecht Harrison, incuding a 90-day on-site career counseling center that will provide an array of outplacement services, such as resume -- building, skills workshops, interview training, and job leads.

What is the value of the Colonial Williamsburg endowment?

The endowment’s current value is approximately $684 million, but approximately half of it is restricted for specific purposes as directed by donors. The other can be used to cover operational losses. Based on our current losses, we anticipate that the portion of the endowment available to fund operations will run out in eight years, if not sooner.

What is the endowment’s annual distribution percentage and amount?

Until 2007, the Foundation withdrew a standard 5% of its endowment annually. That year the Board changed the policy to withdraw 6% annually. Because of annual operating losses, the Foundation has had to take a supplemental withdrawal from the endowment above 6%; in recent years, the percentage has been as high as 12.4%. In the past decade, the Foundation has withdrawn $639.6 million from the endowment, with almost $200 million of that amount coming in the form of supplemental draws above 6%. This is clearly unsustainable.