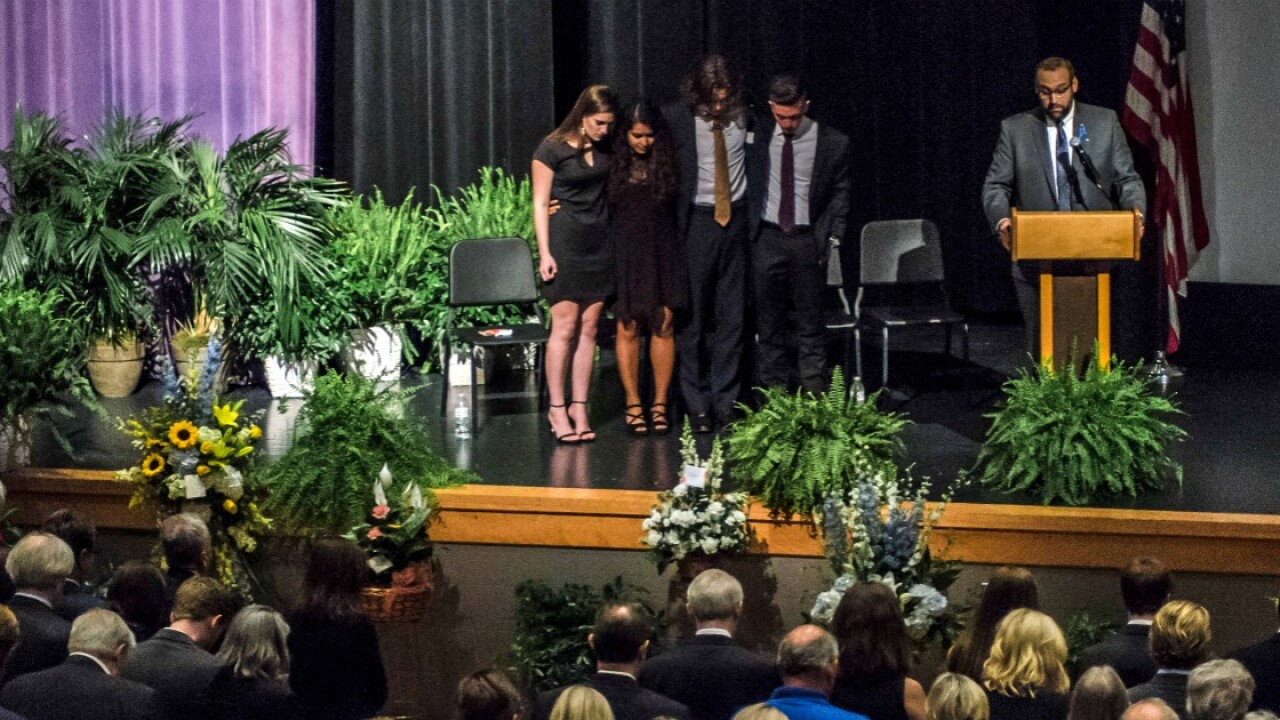 WYOMING, Ohio — Otto Warmbier, the 22-year-old University of Virginia student who died after 17 months in captivity in North Korea, was laid to rest in Ohio this week.
Rabbi Jake Rubin, a Richmond native and the Executive Director of the Brody Jewish Center, Hillel at the University of Virginia, delivered the following remarks at Warmbier’s funeral.

The following was reprinted with Rabbi Rubin’s permission:

There is an amazing story of a rabbi, named Zusya who as he got close to death would often shake with fear.

This will not be Otto’s problem.

Otto was one of the most genuine, warm, and enthusiastic people I have ever known. He was a one of a kind character in the best sense of the word, and he lived life to its fullest as only Otto could. He was overflowing with love and could brighten anyone’s day.

Otto was a devoted son to Cindy and Fred and always in the corner of Austin and Greta. He loved you more than words can express. When he talked about you he always had the biggest smile on his face, and you knew he had to come from an incredible family.

It only takes a few minutes with you all to understand how Otto became the person that we all know and love.

Otto was raised here in Wyoming, Ohio, and he became a part of the fabric of this community. He was the captain of his soccer team, homecoming king, and an incredible student who formed lasting relationships with his teachers.

He volunteered in the community and founded a business club.

Otto loved this community and the outpouring of love and support for Otto and the Warmbier family has been overwhelming and they are eternally grateful.

He then chose to come to the University of Virginia where he immediately set out to meet new friends, pursue his passions, and figure out ways to give back to his new community. Otto got involved with sustainability efforts at the University, joined the fraternity Theta Chi where he met some of his dearest friends, and applied and was accepted into the McIntire School of Commerce.

I had the privilege of getting to know Otto in 2014, when he and some of his fraternity brothers decided to travel to Israel on a Hillel Birthright trip.

In a reflection that he wrote about the trip, Otto talked about how he jumped headfirst into the experience trying to learn as much as he could about Israel and Judaism. He remarked that one of the unexpected joys of the trip was finding a home in the Jewish community. He felt fortunate to have found a new community to explore his faith, but the truth is we were the fortunate ones, that Otto decided to share his remarkable self with us was a true blessing.

There is a quote in Pirkei Avot, a series of ancient rabbinic teachings that instruct on us on how to live a good life that says, “Make for yourself a teacher; acquire for yourself a friend; and judge every person in a positive manner.”

It is as if the rabbis knew Otto when they wrote these words.

Make for yourself a teacher – Otto was one of the most intellectually curious people I have ever met. And I am not sure I have ever worked with a student who was so excited and proud to have found his own rabbi.

He truly saw every experience and person he met as a teacher. He was genuinely curious about the people and the world around him and befriended strangers and traveled the world to try and learn more. Otto was a dedicated student and pursued his academic career with passion and determination, winning awards and scholarships.

But his passion for learning was not just reserved for academics. Otto’s interests were varied and many, and he would show the same gusto for learning about underground rap, finding the best thrift shops anywhere he went, and collecting sports memorabilia and autographs with his dad.

One of Otto’s college roommates told me that he would wake up most mornings to Otto singing along off pitch but with all the confidence in the world to an underground rap artist he was currently in to. And Otto’s thrift shop game was strong. Some of my favorite memories of Otto are the sheer joy he had in wearing his outlandish finds and listening to the inevitable story that led to that treasure.

Acquire for yourself a friend – Otto could make a friend out of anyone. His humor and genuine interest could put anyone at ease and bring a smile to your face. When we were in Israel together, as sign of his growing connection with his faith, Otto decided to take on a new Hebrew name.

It probably won’t surprise anyone in this room that he chose the name Amit, which means friend. He believed there was no greater calling than to be a friend – it was central to his understanding of who he was at his core.

Otto was fiercely loyal and cared deeply for his friends and loved ones. He was always there to support his friends and community and did so through good times and challenging ones. When one of his fraternity brothers passed away suddenly, I watched as Otto rallied his brothers to take care of each other and made sure to check in constantly with them to make sure they were okay.

Anyone who knew Otto knew he was a hugger, even with those he was just getting to know. Often you would hear Otto say, “Bring it in, we’re gonna hug it out.” Otto always had so much love to give.

Judge everyone in a positive manner – This was one of the most remarkable qualities about Otto, and I believe it is what fueled his curiosity and strong friendships.

He was kind and genuine to everyone he met, and always had something positive and of interest to share about them. He made everyone feel welcome and special whether he knew you or not. Otto was relentlessly optimistic and could find the silver lining in any situation and then help others do the same. My lasting memory of Otto is the joy and positivity with which he lived his life. He loved life and it was infectious.

As many of you may know, Otto quoted Andy Bernard from the TV show the Office in his salutatorian speech, “I wish there was a way to know you were in the good old days before you left them.”

Otto, we miss you and love you. We will all remember the time we spent with you as the good old days. We only wish we had more of them.

There is a saying in Judaism, zichrono livracha, it means may his memory be a blessing. I know that for all of us who were fortunate enough to know Otto that this will be true.

My prayer for all of us is that we are inspired by Otto’s memory every day to live life with joy, curiosity, kindness and love.