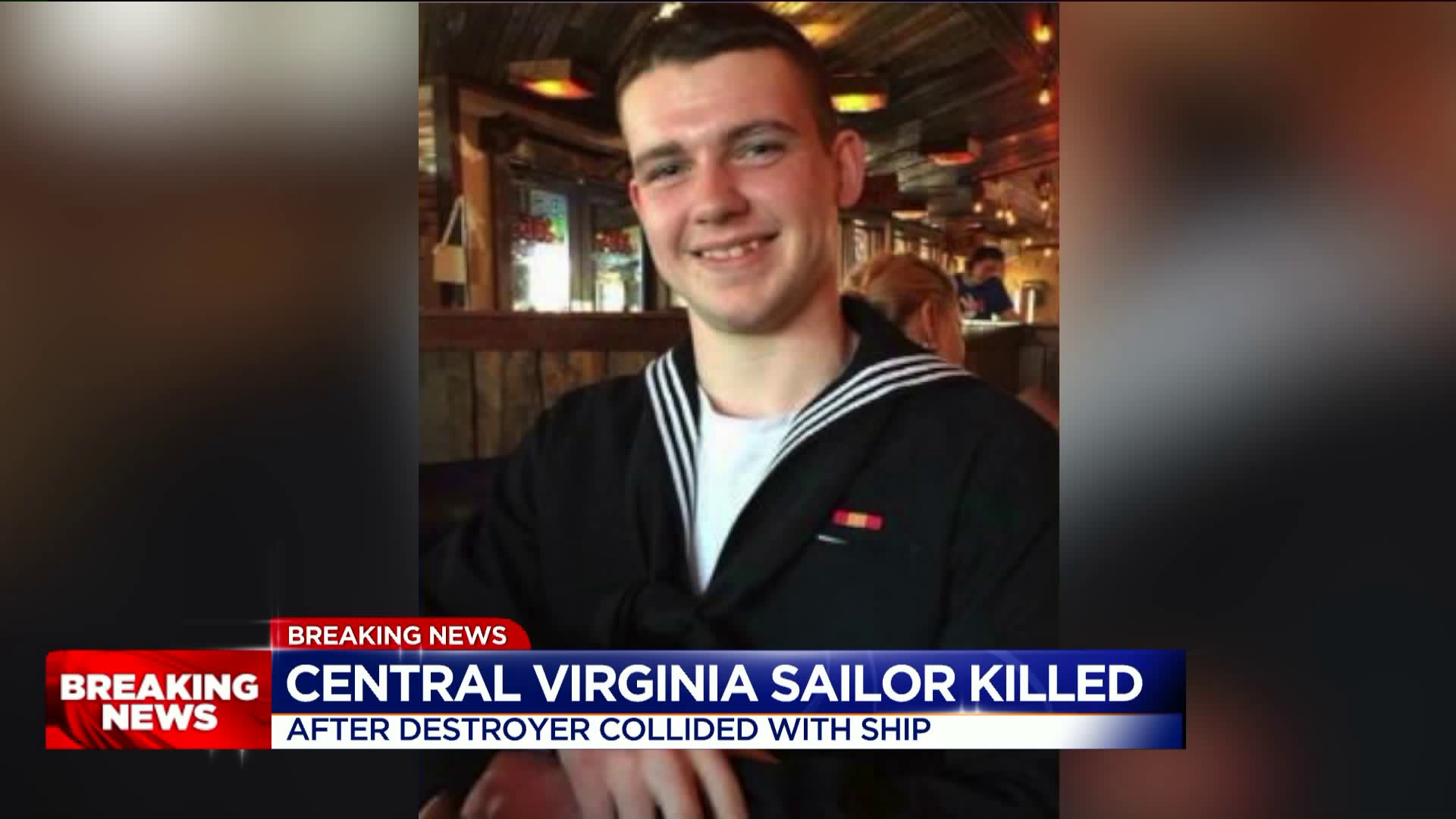 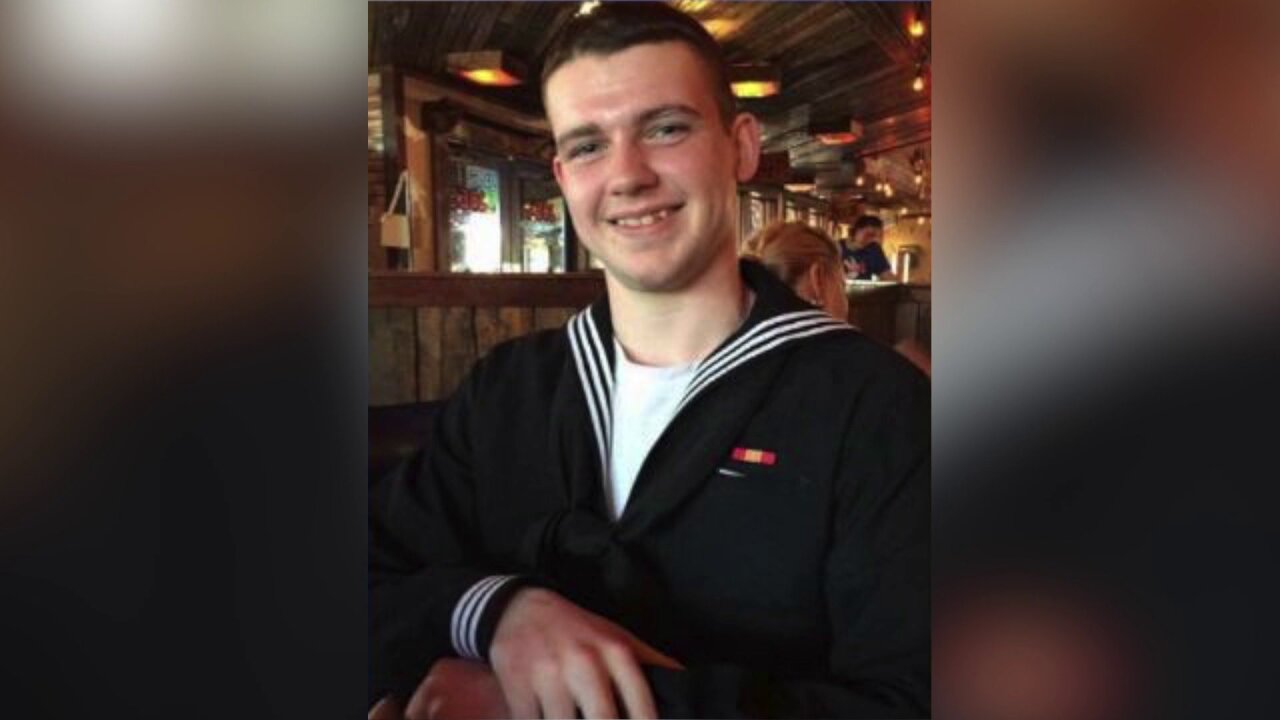 FLUVANNA COUNTY, Va. -- The United States Navy confirmed a Central Virginia sailor is among the dead after a destroyer was damaged by a Cargo Ship off the coast of Japan.

According to WCAV, Rigby was a volunteer for the Lake Monticello Fire Department and is a graduate of Fluvanna High School.

Firefighters held a news conference Sunday evening to remember the Fluvanna County High School graduate, who joined the department in 2014.\

The firefighters vowed to support the family of a young man they said had a smile no one could forget.

"To help you cope with your heartache and pain, together as a family, we will see you through this day. For we also lost a member of our great family," Lake Monticello Assistant Fire Chief Jean Campbell told WCAV.

Farrah Brody, a Lake Monticello volunteer firefighter, called Rigsby a "good kid" and said he would miss watching him play basketball and their Snapchat sessions.

"He was always sending me pictures of things that he found in Japan," she said.

Rigsby's family was slated to speak at the event, but the fire chief said that it was too soon.

"It's a tragic loss. He was definitely taken entirely too soon," Campbell said. "We just know that he is watching over us right now.”

Seven missing sailors from the USS Fitzgerald were found dead in flooded berthing compartments following the warship's collision with a merchant vessel, a US military official said.

The Navy's 7th Fleet said searchers found the bodies Sunday morning, Japan time, after the guided-missile destroyer returned to its base in Japan.

"This loss is something we all feel," Vice Adm. Joseph Aucoin, commander of the US 7th Fleet, told reporters alongside the ship at Yokosuka Naval Base in Japan Sunday.

"We have found a number of the remains ... of our missing shipmates, and our deepest sympathies go out to the families of those shipmates," he said.

The admiral's comments Sunday indicated the loss of life could have been much worse.

"There was a big puncture, a big gash underneath the waterline" along the bottom of the ship, Aucoin said.

The water flow into compartments that were berthing areas for 116 of the ship's crew was "tremendous", he said, adding that "there wasn't a lot of time in those spaces that were open to the sea."

Aucoin said the cabin of the Fitzgerald's captain, Cmdr. Bryce Benson, was completely destroyed. "He's lucky to be alive," he added.

Benson was flown off the crippled ship by helicopter after the accident and was being treated at the naval hospital at Yokosuka, according to Aucoin, as were two other sailors who were medevaced.

The admiral said the ship had been in danger of sinking but was saved by the "heroic efforts" of the crew.

"The crew had to fight very hard to keep the ship afloat," he said.

The destroyer suffered severe damage to its starboard side, while the container ship sustained light damage.

While photos showed serious damage above the waterline, the container ship also did severe damage below it.

A 7th Fleet statement said the collision did "significant damage and associated flooding to two berthing spaces, a machinery space, and the radio room."

Container ships like the Crystal have bulbous bows under the waterline and that portion of the cargo vessel plowed into the US warship.

The Fitzgerald had left the base Friday for routine operations.

Aucoin would not speculate on how the accident occurred, but said there would be multiple investigations into the collision, including one by the Navy's Judge Advocate General and one by the US Coast Guard.

Other investigations could come from the Japanese and Philippine authorities because of where the accident took place and the Philippine registry of the container ship.

The Fitzgerald is an Arleigh Burke-class guided-missile destroyer commissioned in 1995. The vessel is 505 feet long. It normally carries a crew of about 330 sailors and is homeported in Yokosuka.

Despite the significant damage to the destroyer, Aucoin said he expected it would rejoin the fleet.

"The ship is salvageable," he said. "It will take months, hopefully under a year" for repairs.

"You will see the USS Fitzgerald back as one of our warships," Aucoin said.

No one hurt on merchant ship

No one aboard the Crystal was hurt, and no oil spilled from the vessel, NYK said. It was back in port Sunday.

NYK and the ship's owner are cooperating with a Japan coast guard investigation into the collision, the shipping firm said.

"Our thoughts and deep concerns go out to all those directly affected," NYK said.

Photos of the Crystal showed damage to its bow.