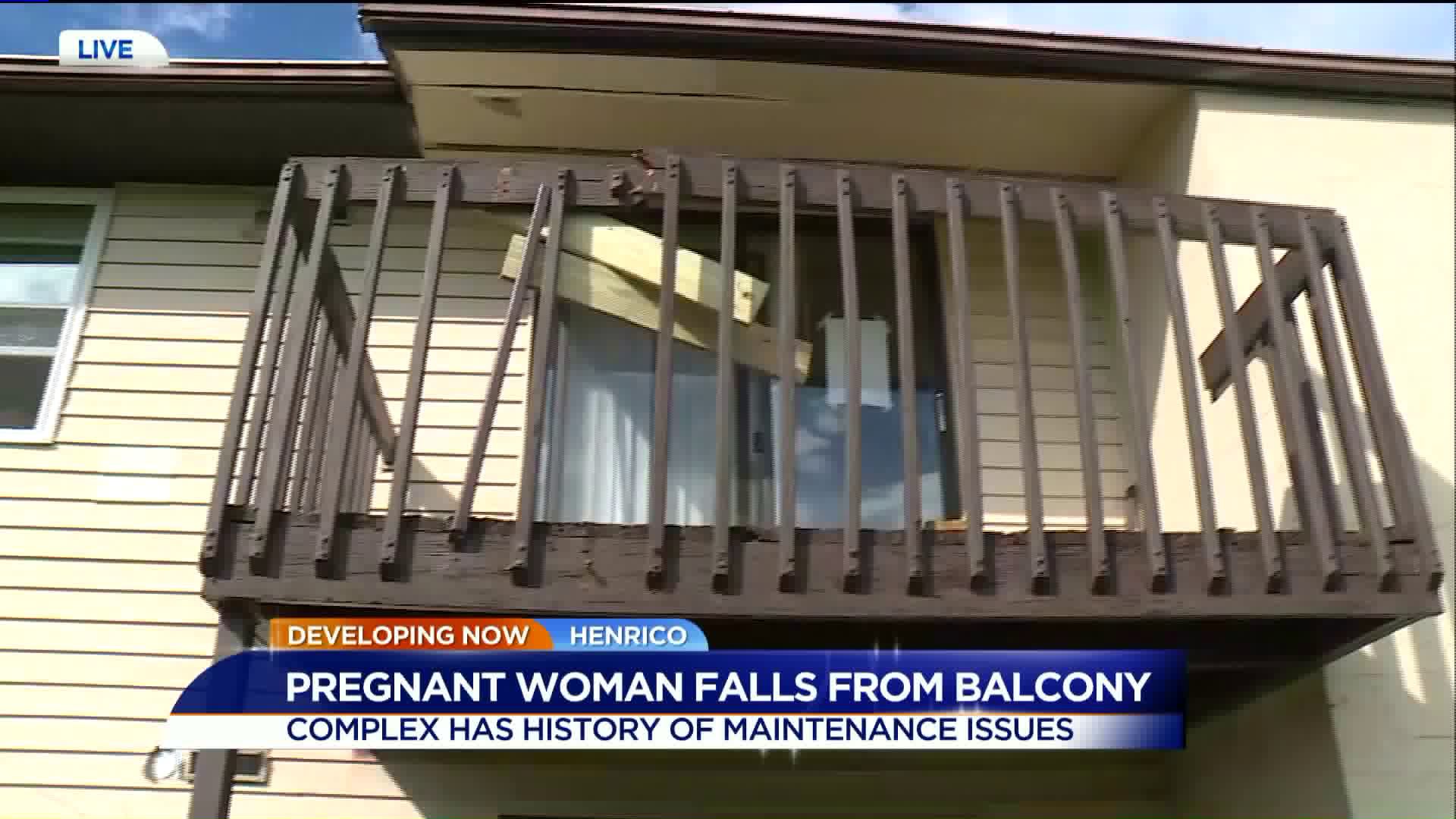 HENRICO COUNTY, Va. -- A pregnant woman was taken to the hospital in stable condition after she fell from a second-story balcony at the Essex Village Apartments along the 200 block of Engleside Drive in Henrico.

The complex recently attempted to repair the balcony in that very spot, officials told CBS 6 reporter Melissa Hipolit, but when the woman leaned up against it, it balcony gave way.

The 30-year-old woman was apparently attempting to fix her screen door when she leaned up against the balcony and fell.

The woman was said to be seven months pregnant.

"As part of our ongoing maintenance, the Essex maintenance team made repairs to the balcony late yesterday afternoon, securing it until permanent repairs could be made today," a spokesperson from PK Management -- the company that managers the community -- said in a statement. "The resident was instructed not to use the balcony. This morning, it was reported that the resident fell through the railing. The matter is being investigated by the County police and fire departments."

Officials from the Department of Housing and Urban Development are looking into the situation.

In the meantime, Rep. Donald McEachin sent a letter to the department Thursday, addressed to Secretary Ben Carson, calling for immediate answers.

“It is totally unacceptable for residents in a HUD-subsidized complex to endure unsafe and unhealthy living conditions. It is HUD’s responsibility to ensure all residents have an acceptable quality of life,” he wrote.

“In the very near future, you can expect a longer letter from me asking what HUD will do about these systemic problems, including numerous code violations and life safety issues,” he added.

Essex Village, a Section 8 housing complex next to Richmond International Raceway in Henrico's East End, has been the subject of a months-long CBS 6 investigation.

Some residents told CBS 6 investigative reporter Melissa Hipolit the place has not been maintained by its owners.

"I would not be able to explain to my kids why other kids live in the conditions they live in, in this complex, and it's not the fault of the kids," Henrico County Manager John Vithoulkas told Hipolit. Vithoulkas said after a visit to Essex Village last summer, he decided to take action.

"There is a wrong that has been committed here, and the wrong is individuals have made a lot of money, and they've not kept a complex to the specifications they were supposed to," he continued.

Vithoulkas put Deputy County Manager Colonel Doug Middleton in charge of a task force aimed at improving the quality of life at the complex.

"It's not a place that anybody should exist and live in," Middleton said.

The fire and police departments found that they are roughly two times more likely to respond to calls for service there than anywhere else in the county.

In January, inspectors from the U.S. Department of Housing and Urban Development gave Essex Village an "F" grade.

During a recent visit to the complex, the new Regional Vice President of GHC Housing Partners -- the company that owns the complex -- told CBS 6 that things are changing for the better.

Greg Perlman said all residents would see major changes by the beginning of May.

"Once the 100 percent maintenance is over, will you come to town and give us a tour of the property?" Hipolit asked.

"I will be happy to show you the property and make sure it is moving up to our standards," Perlman responded.

Perlman said the building needed a $19 million renovation and he wanted to do one using tax exempt bonds and tax credits, but he said the county would not support the plan.