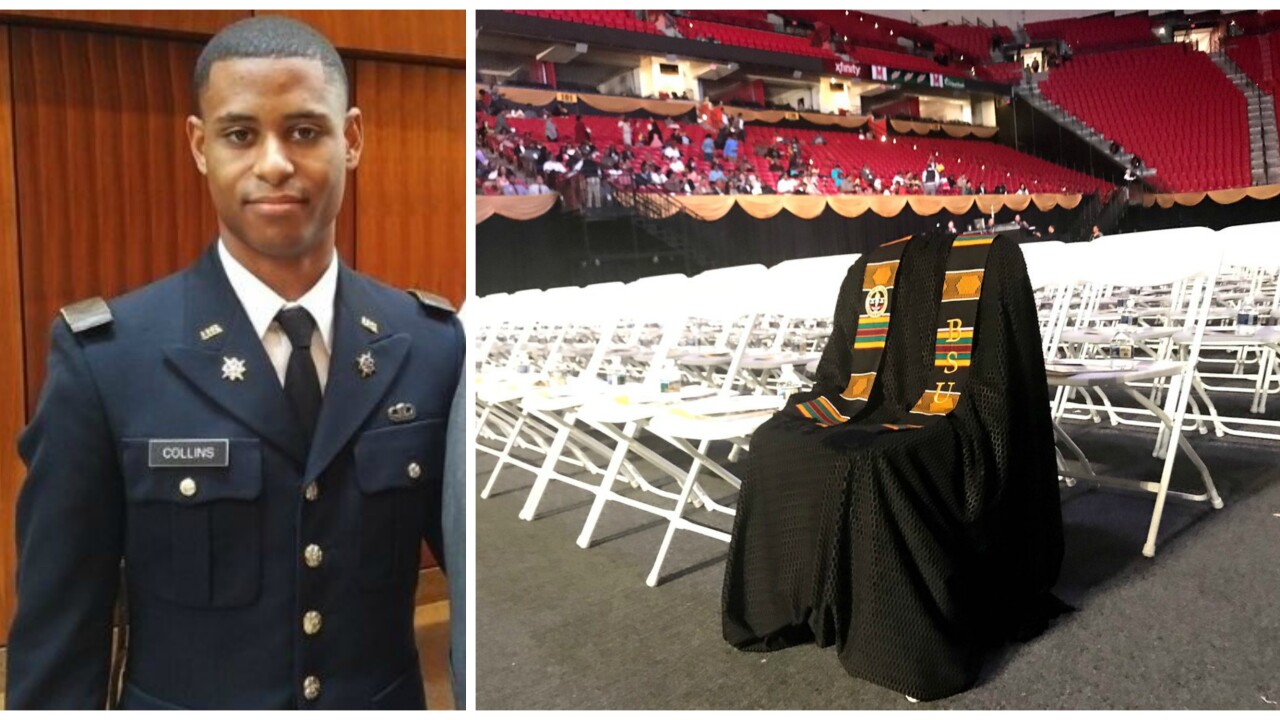 Today should have been the day Richard Collins III walked across a stage in a cap and gown.

Instead, his gown lay draped over a chair in the front row at Bowie State University’s commencement ceremony.

Collins was three days away from graduating when he was stabbed to death at a bus stop while visiting friends at the University of Maryland.

The FBI is investigating whether Collins was killed in a hate crime. Police said the suspect was a member of a Facebook group that spewed hatred toward minorities.

But what the suspect didn’t know was that Collins had just been commissioned as a US Army lieutenant two days earlier. That he had served in the Reserve Officers’ Training Corps and planned to keep serving his country after graduation, his father told NBC News.

Richard Collins III, 23, was killed two days after he was commissioned as a US Army lieutenant.

The young man “would go out of his way, sometimes to my chagrin, to go and help others — but you want to try to encourage that in your children,” Richard Collins Jr. said.

But now, “the parent’s worst nightmare has just reached my doorstep.”

As the Class of 2017 streamed in, their faces alternated from joyous to somber.

Collins’ relatives sat in the front row, near the gown he should have been wearing.

“One of our graduates, in the prime of his life, has fallen victim to an unprovoked assault in yet one more manifestation of the senseless violence permeating our society.”

The president called for a moment of silence and asked the graduates to contemplate “what each of us might do to promote greater peace, harmony and love that seems to be so lacking in our country, in our world today.”

Collins was later posthumously awarded his bachelor’s degree. His family accepted his diploma for him.

Around 3 a.m. Saturday, Collins and his friends were standing at a bus stop waiting for an Uber when suspect Sean Christopher Urbanski approached them, police said.

“He said to the victim, ‘Step left, step left if you know what’s good for you,'” the witnesses said, according to the police chief.

“The victim looked at him puzzled with the other friends of his and said ‘No,'” Mitchell said. “It was then that (the suspect) stabbed the victim in his chest.”

Urbanski has been charged with first- and second-degree murder as well as first-degree assault. His attorney, William C. Brennan Jr., said at a bond hearing Monday that his client was intoxicated at the time.

But Maryland District Judge Patrice E. Lewis denied bond for Urbanski, calling him “an absolute danger to the community.”

The police chief said Urbanski was a member of the “Alt-Reich” Facebook group.

“When I looked at the information that’s contained on that website … it’s despicable,” Mitchell said.

“It shows extreme bias against women, Latinos, members of the Jewish faith and especially African-Americans, which brings up questions as to the motive of this case.”

The Southern Poverty Law Center, which monitors hate crimes and hate groups, said it had not heard of “Alt-Reich” before the Maryland killing.

In recent months, there has been a jump in racist groups naming themselves variations of the term “alt-right,” said Heidi Beirich, director of the SPLC’s Intelligence Project.

Maryland State Attorney Angela D. Alsobrooks said authorities “need something probably more than just a Facebook posting” for the killing to be considered a hate crime.

While investigators try to determine whether Urbanski should be charged with a hate crime, one fact is already apparent, the prosecutor said: Collins was “a person who represented in every way possible the very best of this community.”

“He was already a person who had accomplished so much,” she said, “more than many of us will accomplish in a whole lifetime.”