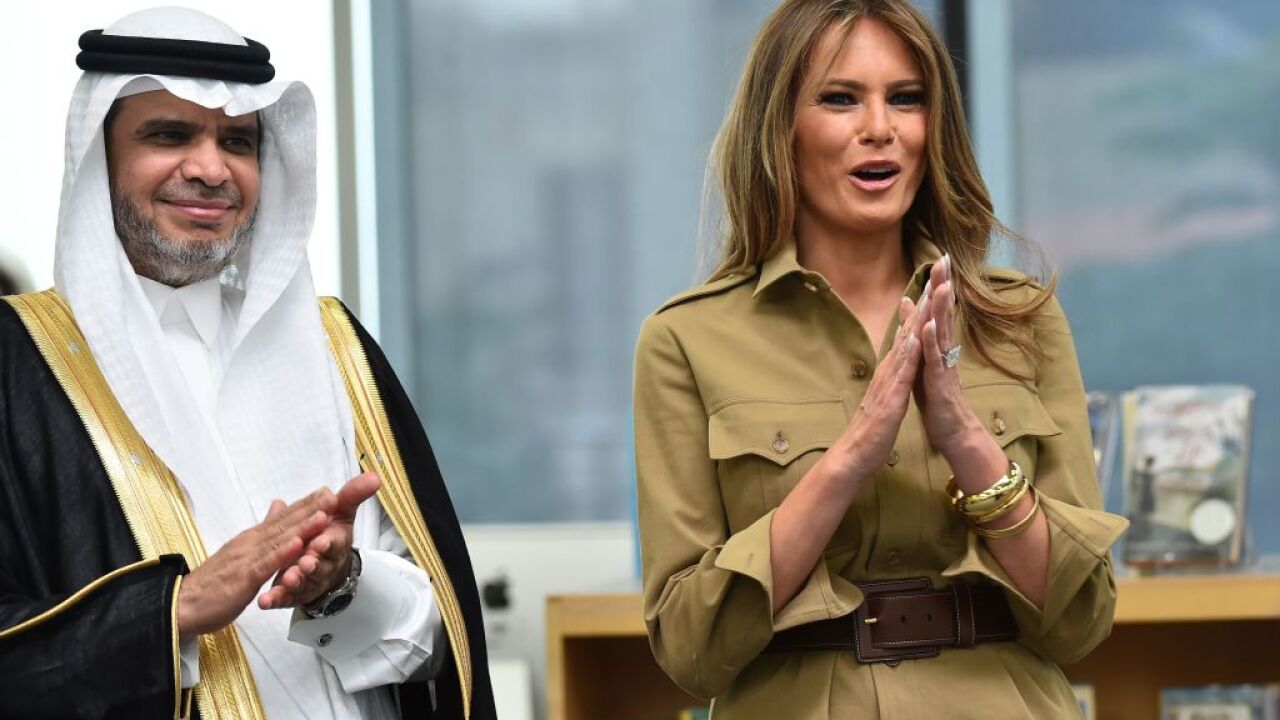 Both the first lady and first daughter Ivanka Trump have been closely watched in Saudi Arabia for both style and substance.

On Sunday, the first lady conducted a few solo events while her husband continued bilateral meetings with the Gulf Cooperation Council. She visited the American International School in Riyadh and an all-women General Electric service center, tweeting out images from both visits, calling the visits an “honor” and praising “international perspective and education to children.”

“It is important to hear directly from local women about progress they and their country have been able to make and the challenges they still face,” a White House official said.

Both women went sans headscarf during their time in the kingdom, despite the fact that President Donald Trump once criticized Michelle Obama for doing the same.

“Many people are saying it was wonderful that Mrs. Obama refused to wear a scarf in Saudi Arabia, but they were insulted. We have enuf enemies,” he tweeted in January 2015.

Arab News, circulated in a special English print edition for US press, heaped praised on the first lady, calling her outfits “classy and conservative.” A full-page color photo accompanied, showing a glowing Trump in a black jumpsuit.

In a country that favors abayas for women over almost anything else, Trump stepped off Air Force One in the jumpsuit, which appeared to be from British designer Stella McCartney. Cuffed at the sleeves and cinched at the waist with a large gold belt, the flowing look closely resembled an abaya, which her spokeswoman Stephanie Grisham said was not a coincidence.

“If you look at her style, it’s still very much her and her style of dress but being sensitive to the place and host nation for sure,” Grisham said.

Arab News noted the resemblance as well, quoting a boutique-owner in Jeddah, Nahed Andijani: “When I saw her arrival pictures wearing a modest outfit respecting our culture, I was like, ‘This looks so much like my abaya!’ ”

Trump wore the jumpsuit for a day of bilateral meetings before changing in the evening into a sweeping magenta gown, complete with flowing cape sleeves, for dinner at the Saudi palace. American press noted that the first lady and Ivanka Trump were the only women present at the opulent welcoming ceremony, which featured the Saudi king and Cabinet secretaries dancing with swords.

Grisham said of the decision to opt out of the scarf that Trump has been working closely with the State Department protocol and received briefings before the first foreign foray.

“It was not required for her to wear a headscarf and nobody asked her to, and based on that she chose not to,” Grisham said, adding that the first lady has been “studying hard” for the trip.