Meet the heroes who took down the Times Square driver 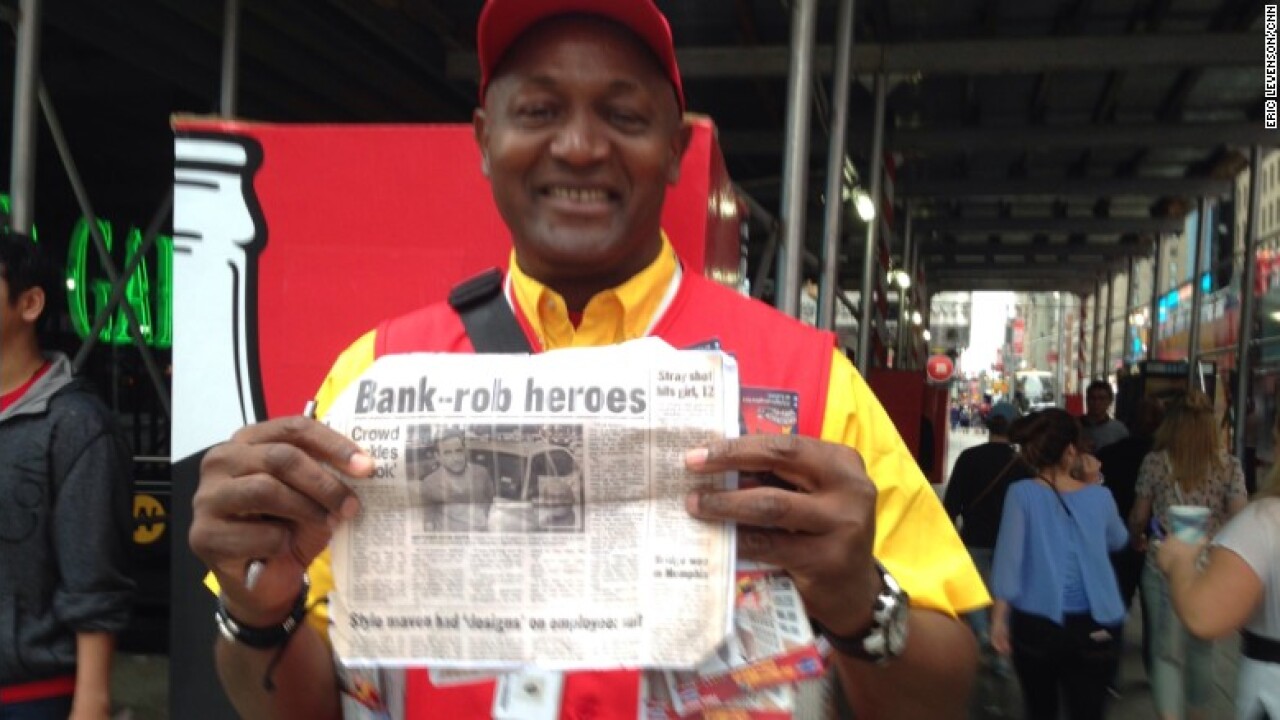 The longtime Planet Hollywood bouncer saw a red car driving on the sidewalk into crowds of pedestrians near New York City’s Times Square. He saw the car smash into a metal pole, saw a man hop out of the car flailing his arms and screaming, and saw others try — but fail — to grab him.

So he ran after the suspect himself.

“I saw an opportunity and tackled him to the ground from his left side,” Bradix told HLN on Friday. “I got him down, turned him on his stomach.”

Nearby, Alpha Balde, a father of eight from Guinea, was helping move a man out of harm’s way when he heard the commotion just before noon Thursday.

Balde, in the trademark yellow shirt and red vest worn by employees of the New York City sightseeing bus company Gray Line, looked to his left and saw Bradix tackle the man. He sprung into motion.

Balde ran to the suspect and put his hands around the man’s neck to keep him down, he said. Balde also patted the suspect down and searched him to make sure he didn’t have a weapon.

Balde and Bradix were joined within a minute by a handful of on-duty and undercover New York police officers, who took over the scene and arrested the suspect.

Police have identified the driver as Richard Rojas, a 26-year Bronx resident who intentionally drove onto the sidewalk in an attempt to “kill them all,” he told police, according to a criminal complaint. He was charged with murder and 20 counts of attempted murder.

Now two days later, Balde and Bradix are being praised for their bravery and willingness to risk their own safety to stop a fleeing suspect in one of the most popular places in the world. Yet in separate interviews, both said they weren’t scared at that moment and downplayed any suggestion they’re heroes.

‘I was in security mode’

For Balde, the incident was all a little familiar. Back in August 2007, he tackled a man fleeing a bank robbery and was featured as a crime-stopping hero in the New York Post.

To this day, Balde keeps a photocopy of that story folded up in his pocket.

“I keep this for my record. You never know,” said Balde, who moved to the US decades ago. “I’ve got the newspaper at home, so I always make a copy.”

Bradix, a buff man with imposing biceps, has worked security at the Times Square restaurant for 25 years, he said on HLN on Friday.

When he saw the screaming suspect, then heard a man say “Get him, get him,” Bradix jumped up and, well, got him, he said.

“At that moment, I guess I was in security mode, I would call it. I basically was on instinct,” he said. “And I didn’t think for a second if he had anything (dangerous) or what could he possibly do. I was just thinking, ‘Just get the guy down and subdue him ’til the police came.'”

Despite his decades of work in Times Square, Bradix said he’d never seen anything like this.

“You don’t expect this to happen. Or when you do see it, it’s always on TV, some other state, but not right in front of you,” Bradix said. “This happened in front of me.”

In an interview Saturday with CNN in Times Square, Balde said he’s been getting handshakes and praise from friends and strangers who recognized him from the news. As he recounted taking down Rojas, two people interrupted to shake his hand or get a photo.

And though this was Balde’s second crime-stopping adventure, it may not be his last.

“I’m ready to do the same thing again,” he said. “(If) you’re gonna come in New York City trying to hurt somebody, come in this area here, you don’t have no chance. Because we’re gonna keep our eyes open.”