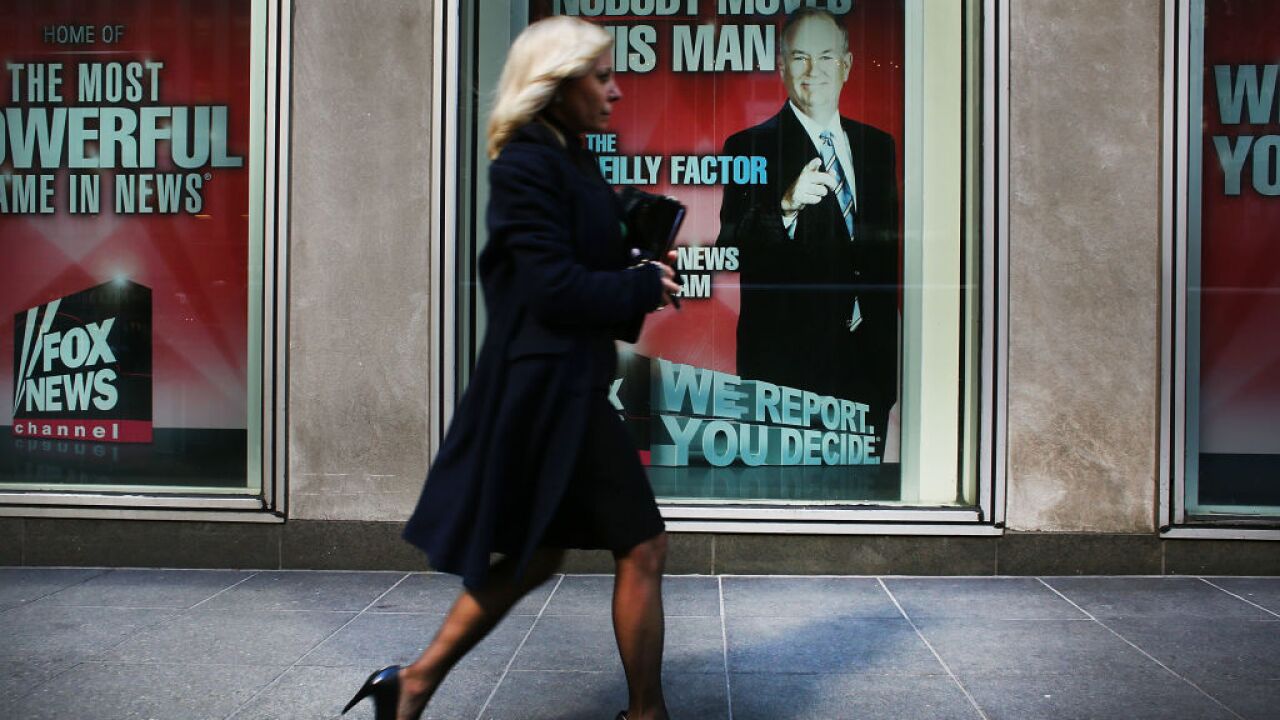 NEW YORK, NY – APRIL 05: An advertisement for Bill O’Reilly’s top-rated Fox News show is displayed in the window of the News Corporation headquarters on April 5, 2017 in New York City. Following allegations that he sexually harassed several women, over a dozen major advertisers, have pulled their ads from “The O’Reilly Factor.” (Photo by Spencer Platt/Getty Images)

NEW YORK — Fox News on Friday announced that it had fired “The Five” co-host Bob Beckel for a remark he made to an employee of color.

“Bob Beckel was terminated today for making an insensitive remark to an African-American employee,” a network spokesperson said in a short statement.

It wasn’t immediately clear who would replace Beckel on “The Five” and Fox News did not provide details on the incident that led to his firing. Beckel was not immediately available for comment.

Douglas Wigdor and Jeanne Christensen, lawyers handling a growing racial discrimination lawsuit filed by current and former Fox employees, said in a joint statement that Beckel told one of their clients, a black IT worker, that he was leaving the office while the employee serviced his computer because the employee is black. When the IT worker filed a complaint, Beckel attempted to intimidate him to withdraw it, Wigdor and Christensen said.

“As with our other 22 clients, we intend on holding 21st Century Fox accountable for these actions and will be filing multiple other complaints in other matters next week,” Wigdor and Christensen said.

In response, a Fox News spokesperson said in a statement that the network “made the decision to terminate Mr. Beckel after a prompt and thorough investigation.”

“No one tried to persuade Mr. Wigdor’s client to withdraw his complaint,” the Fox News spokesperson said.

This is not the first time Beckel, who was also a contributor at CNN for a brief period beginning in late 2015, has parted ways with Fox News. Beckel previously left Fox News in 2015 after undergoing back surgery.

Bill Shine, who was at the time Fox News’ executive vice president of programming, said at the time that the network refused to be held “hostage” to his “personal issues.”

“He took tremendous advantage of our generosity, empathy and goodwill and we simply came to the end of the road with him,” Shine said in a statement then.

Rupert Murdoch, executive chairman of Fox News, unexpectedly announced Beckel’s return to Fox News earlier this year, saying he was “missed by many fans of ‘The Five.'”

Fox News recently moved “The Five” to the 9 p.m. hour as part of a broader shakeup of its programming following the cancellation of “The O’Reilly Factor” in the wake of a scandal surrounding its host Bill O’Reilly and settlements made with five women who had accused him of sexual harassment or verbal abuse.