Besieged at home, Trump sets off for foreign trip 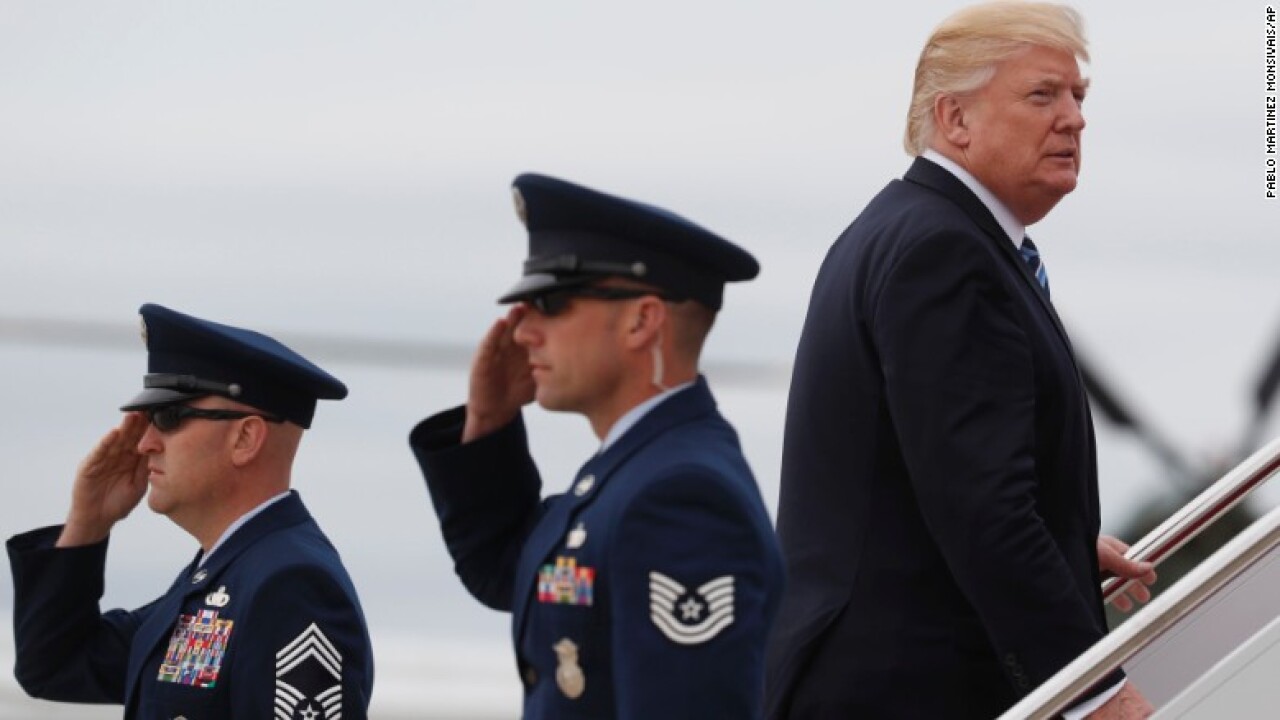 WASHINGTON — Besieged by bad news at home, President Donald Trump is about to get religion.

In his first foreign trip as President, which begins Friday, Trump has planned a pilgrimage of sorts, visiting the homelands of all three Abrahamic faiths — Judaism, Christianity and Islam — before heading to Europe for meetings with Pope Francis and NATO leaders.

In all, it’s an ambitious nine-day, five-country tour that will test the religious acumen and diplomatic skills of a President who, beyond courting conservative Christians and casting suspicion on Muslims, rarely talks about religion.

Trump’s itinerary includes Saudi Arabia, the birthplace of Islam, where he aims to erase his Islamophobic image and urge Muslim leaders to address extremist ideologies. In the Holy Land, Trump wants to jumpstart the stalled peace negotiations between Israelis and Palestinians, while visiting touchstones like the Western Wall. And in Europe, the President seeks to repair frayed relations with two of the continent’s most venerable institutions, the Vatican and NATO.

Gen. H.R. McMaster, Trump’s national security adviser, called the President’s plans unprecedented. “No President has ever visited the homelands and holy sites of the Jewish, Christian, and Muslims faiths all on one trip,” he said at a press briefing last week.

Actually, other Presidents have visited Saudi Arabia and the Holy Land on the same trip. But no President has included the Vatican, Catholicism’s holy headquarters, on the itinerary.

The White House says Trump has three main goals: to project American power abroad, build relationships with world leaders and “broadcast a message of unity” to Jews, Christians and Muslims.

“What President Trump is seeking is to unite peoples of all faiths around a common vision of peace, progress and prosperity,” McMaster said.

Religious accord is a smart way for the White House to frame Trump’s trip, said Chris Seiple, former president of the Institute for Global Engagement and an expert on faith and foreign policy.

“Most of the American people are utterly fed up with the Middle East, and this framework is a way to get their attention,” Seiple said.

But some religious experts question whether Trump is the right messenger to preach about religious unity.

Trump was raised Christian, but as an adult he has rarely attended worship services, nor has he cultivated relationships with religious leaders. Later, while running for President, his remarks on religion were sometimes seen as uninformed and divisive.

He was accused of tweeting an anti-Semitic image and trafficking in anti-Jewish tropes; he said “Islam hates us” and pledged to temporarily bar Muslims from the United States; he even feuded with Pope Francis, who said that someone who talks only about building walls instead of bridges isn’t Christian. Trump called the Pope’s comments “disgraceful.”

Concerns about Trump’s views on religion have carried over into his administration.

He pleased his conservative Christian base with the nomination of Neil Gorsuch to the Supreme Court and an executive order promising greater legal latitude to pastors who want to preach about politics. But Jews complained for weeks about his reluctance to condemn dozens of bomb threats at Jewish community centers, and Muslims say his executive order halting immigration from several Muslim-majority nations discriminates against their religion.

“Up until now, Trump’s message on Islam has been very confrontational, a clash-of-civilizations type narrative,” said Shadi Hamid, a senior fellow at the Brookings Institution and an expert on political Islam. “For him to talk about the great faiths unified in a common civilization would be quite different.”

Posing for photos with the Pope and praying at the site of Jesus’ tomb may alter Trump’s image, but the President’s pilgrimage still bears risks, especially for someone with a tendency to improvise in delicate diplomatic situations.

“If he takes advantage of this trip to bring people together, that would be good,” said Seiple. “On the other hand, the whole thing could blow up in our face.”

With those dangers in mind, here are the key religious events during Trump’s trip.

Where: Riyadh When: May 20-21 Key religious event: Speech to leaders of 50 Muslim countries

McMaster said Trump plans to deliver an “inspiring yet direct” speech to leaders from Muslim countries on Sunday. The topic is the “need to confront radical ideology” and the “President’s hope for a peaceful vision of Islam to dominate across the world.”

“The speech is intended to unite the broader Muslim world against common enemies of all civilization and to demonstrate our commitment to our Muslim partners.”

The President is fairly popular among Muslim heads of state, experts say, because of his hardline stance on Iran and reluctance to lecture Middle East dictators on human rights.

But Trump’s speech risks alienating or even insulting many Muslims who are weary of Western politicians conflating their faith with terrorism.

“If he says nothing about Islamic extremism, then supporters at home will say he bit his tongue; if he says too much about it, he could conceivably offend some of those who are there.”

William McCants, director of the Brookings Institution’s Project on US Relations with the Muslim World, offered Trump some advice for the speech. The first tip: cancel it.

“The President is not known for nuance, which is what a speech like this requires to escape the potential wrath of his multiple audiences,” McCants said.

McCants and other experts on Islam also warned against projecting Saudi Arabia’s strict theocracy as a model for “moderate Muslims.”

While the country is the custodian of Islam’s “two holy mosques,” it has also spread a toxic theology, Salafism, that has inspired extremists like al Qaeda and ISIS. What’s more, the country has a horrible human rights record, according to international watchdogs, particularly on religious freedom.

One safe proposal, according to foreign policy experts, is a regional roundtable on religious freedom, looking particularly at the plight of Christians in Muslim-majority countries. The Trump administration has been studying the idea, after meeting with members of the Institute for Global Engagement earlier this month.

Where: Jerusalem and Bethlehem When: May 22-23 Key religious events: Speech at Israel Museum, prayer at Western Wall, visit to Church of the Holy Sepulchre

In some ways, Trump is sending a message just by setting foot in Israel, Jewish leaders say.

President Obama, during his first Middle East trip, skipped the Jewish state, a slight that some Israelis were reluctant to forgive, said Robert Danin, a former State Department official and senior fellow at the Council on Foreign Relations.

In Jerusalem, Trump will lay a wreath at Yad Vashem, a memorial to the Holocaust victims, before delivering a speech “reaffirming America’s unshakable bond” with Israel at the Israel Museum, the White House says.

Danin said some Israeli leaders appear apprehensive about Trump’s speech, mainly because they don’t know what he’s going to say.

“That uncertainty is very anxiety-provoking for the Israeli government because they fear that he is going to ask the Israelis to do things that this government may not want to do, may not be in a position to do.”

Other Jewish leaders say they’ll be looking for more than pacifying political rhetoric from Trump.

“We want to see if the President understands Israel’s traumas, its security dilemmas and its unique importance in the region,” said David Harris, CEO of the American Jewish Committee. “It’s about chemistry and tonality and feelings. We want to know if he feels Israel in the kishkes,” the Yiddish word for gut.

The Trump administration has already caused a diplomatic stir over the Western Wall, the last remnant of Judaism’s Second Temple and its holiest place of prayer.

According to reports, an American diplomat said Israeli Prime Minister Benyamin Netanyahu could not accompany Trump to the holy site because it’s not in Israel. Previous administrations have considered East Jerusalem, where the wall sits, to be Israeli-occupied territory, but Trump’s position is unclear. Palestinians also claim Jerusalem as their capital.

McMaster dodged questions about Trump’s stance on the wall, saying the President aims to send a religious, not political, message.

“He’s going to the Western Wall mainly in connection with the theme: to connect with three of the world’s great religions — and to pay homage at each of these religious sites that he’s visiting.”

Earlier that day, Trump will travel to Bethlehem, where he will encourage Palestinian National Authority President Mahmoud Abbas to come to the negotiating table with Israel, the White House says.

Trump has eased the way for talks to restart, Middle East experts say, by delaying a campaign promise to move the US embassy to disputed Jerusalem, a change that would irk Palestinians and other Arabs.

But, one way or another, the President will have to address the embassy question, Abrams said. “If the President says nothing about it, then he is, in essence, moving away from the campaign promise.”

One possible compromise: Trump could continue to call Jerusalem “the eternal capital of the Jewish people,” while dragging his feet on the embassy move.

When Trump visits the Vatican Wednesday, it will be the most highly anticipated meeting between Pope and President in recent memory. But those expecting a donnybrook will likely be disappointed, church experts say. Neither the President nor Pope Francis seem eager to replay their brief spat over Trump’s border wall.

Asked about the upcoming meeting, Francis said he hasn’t yet passed judgment on Trump.

“I will say what I think, he will say what he thinks, but I never, ever, wanted to make a judgment without hearing the person,” the Pope said at a recent press conference aboard the papal plane.

Francis also said he will not seek to change Trump’s mind, but instead seek avenues of agreement.

“Look for the doors that are at least a little bit open, enter and talk about common things and go on. Step by step. Peace is handcrafted. It is made every day. Also friendship among people, mutual knowledge, esteem, is handcrafted.”

Churchwatchers say the Vatican is eager to open lines of communication with the new American President, especially after their rocky start.

“At this point, there doesn’t seem to be much common ground between the new President and the Pope,” said John Thavis, author of “The Vatican Diaries” and a longtime reporter on the Catholic Church, “and that’s probably pretty worrying for the Vatican.”

McMaster said Trump looks forward to paying his respects to the Pope and discussing religious freedom, as well as cooperation in humanitarian missions and combating religious persecution and human trafficking.

Much of the meeting consists of elaborate protocol: the Swiss Guard will welcome Trump as a head of state, and the Pope and President will exchange gifts. The private meeting between Francis and Trump is expected to last just half an hour, as the Pope is scheduled to speak in St. Peter’s Square shortly after the encounter

Rep. Francis Rooney, US ambassador to the Vatican from 2005-2008, said the real diplomatic decisions often occur when the secretaries of state and other diplomats convene on the sidelines. One such meeting covered 16 countries, Rooney recalled, in which the Catholic Church and United States worked together on political and humanitarian missions.

“The Holy See doesn’t have business to promote or consular activities to direct,” Rooney said. “It’s all about the big ideas and the power of persuasion.”

For a President who likes to think big and make splashy deals, this trip offers plenty of opportunities, as well as a few potential pitfalls.