Meet Russia’s ‘Father of all bombs’ 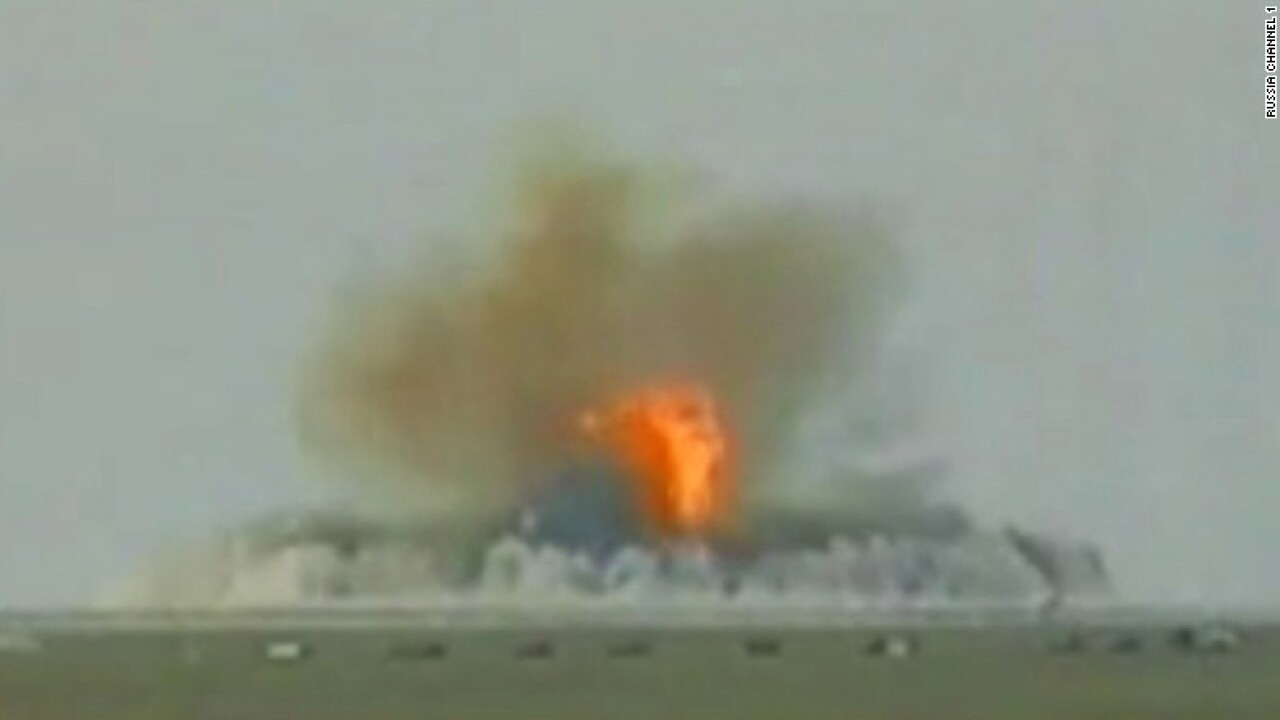 MOSCOW — Born in Russia in 2007, the “Father of all bombs” may be holding a title surpassed by no other.

Based on the specifications the Russian military has released, analysts say Russia could be right.

“We believe it’s real,” said retired Col. Rick Francona, military analyst and former US military attache in Syria. “The Russians have been among the pioneers of these thermobaric bombs.”

“I don’t have any doubt that they could build this,” Francona said. “It falls under their technological capabilities.”

“The FOAB, if what has been reported about it is true, is the most powerful non-nuclear bomb in the world,” said retired Col. Cedric Leighton, military analyst and former member of the Joint Chiefs of Staff.

FOAB has never been used in combat.

“The FOAB is a thermobaric bomb, which means that its payload explodes at much higher temperatures,” Leighton said. “The result is that living things within the area of detonation are vaporized, making the FOAB a spectacularly terrible weapon.”

Russia announced that the bomb was first tested in 2007. In a national broadcast that aired on September 11, 2007, deputy chief of the general staff of the Russian Armed Forces at the time, Alexander Rukshin, said the first test of a new bomb, capable of sending shock waves with the power of a nuclear bomb, was completed.

“The results of the tests of this air ammunition have shown that it can be compared with a nuclear weapon by its efficiency and capabilities,” Rukshin said. “At the same time, I particularly want to emphasize that the impact from this ammunition does not pollute the environment in any way compared to a nuclear munition,” he added.

A Channel 1 broadcast, as well as other recent publications in Russian state media, claim that FOAB is four times more powerful than MOAB, with explosion power equivalent to 44 tons of TNT, compared to 11 tons for the MOAB. FOAB is also reportedly lighter, weighing 7,100 kilograms, compared to 8,200 kilograms, while its blast radius is double that of the MOAB, at 300 meters, or about 984 feet.

Leighton said analysis conducted by his group supports those claims but there are some questions whether the explosion shown in the specific video was produced by a weapon like FOAB.

Alexander Mozgovoy, editor of Russian magazine National Defense, said he believes the Channel 1 video is accurate and he thinks Russia may have developed more than one FOAB, just like the United States has built several MOABs.

“I don’t think there is only one bomb [of this kind] but definitely not a lot of them,” he said. “This bomb doesn’t leave anything alive. It turns everything in ashes.”

When the US military first tested the GBU-43/B MOAB in 2003, the Cold War era was long gone but the rivalry between the world’s two superpowers never really ended.

After MOAB was introduced, Russian developers built their own bomb and by analogy nicknamed it the “Father of all bombs,” according to the Channel 1 report.

While the nickname has become widely popular today, it was originally created as a secret code name for the weapon, according to Channel 1.

Since then, not much additional information about the bomb has become available. “We’ve only seen what the Russians have told us,” Francona said.

“Russia has not exported this weapon to any other nation as far as we know and it is unlikely that they will export it in the future,” said Leighton. “At the moment, the FOAB’s technology would be deemed to be too sensitive to export,” he added.

Potential impact ‘on a scale unseen’

“These are very unique weapons, so the demand for them is very, very low, because you won’t use these indiscriminately,” Francona said.

MOAB was originally intended to be used against large formations of troops and equipment or above-ground bunkers, but later the targets expanded to caves and tunnels buried under softer surfaces.

It was used for the first time on April 13, 2017, by the US military in Afghanistan’s Nangarhar province, targeting a network of fortified underground tunnels that ISIS used to stage attacks on government forces.

The ISIS tunnels in Afghanistan were the right target for the MOAB, said Francona. “Those cave complexes, tunnel complexes really call for this weapon,” he said.

Russia started developing FOAB during the Afghan war, said Mozgovoy. It was intended to clear safe airspace so military helicopters can fly though, he said.

Nonetheless, it would be unthinkable to use a weapon like FOAB in areas where the Russian military operates in Syria, because of the potentially “immense” number of civilian casualties, Francona said.

“This would be on a scale unseen in Syria,” he said. “I hope that we won’t see the FOAB deployed in Syria, because it’s just not the right target.”