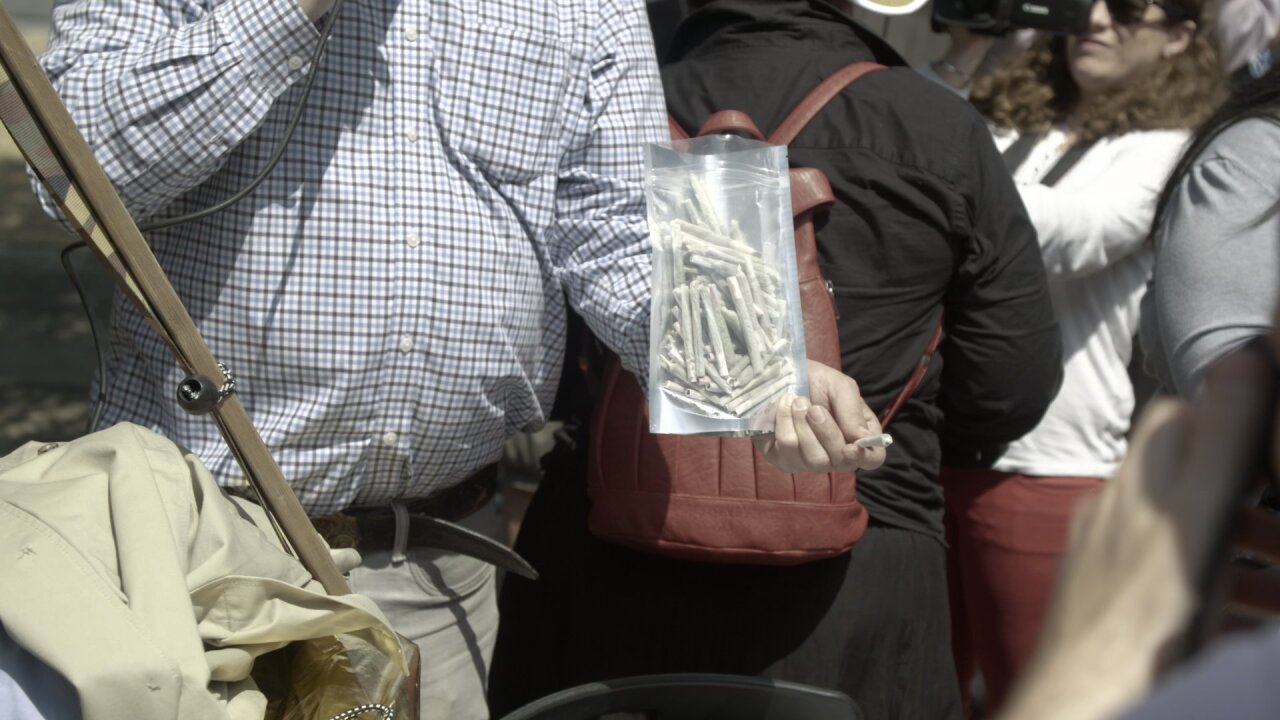 Members of DCMJ, the local pot activist group that organized the “joint session,” contended the protest was taking place on DC land, not the federal property of the Capitol grounds. Possession and distribution of marijuana is illegal under federal law, while the DC government allows possession in small quantities.

Capitol Police said in a statement the arrests were made under federal law, with three charged for possession with intent to distribute and four charged with possession.

Adam Eidinger, a co-founder of DCMJ, told CNN while he was handcuffed and searched by police that he had not expected to get arrested at this protest.

“This is legal,” Eidinger said.

Nikolas Schiller, the other DCMJ co-founder, told CNN the giveaway had to end early because the cops took all of the pot. He insisted the police were out of line.

“We believe that the US Capitol Police made politically motivated arrests,” Schiller said.

Capitol Police on the scene declined to answer questions about their actions or what crime the protesters had committed. Eva Malecki, a Capitol Police spokesperson, issued a statement later saying officers arrested people after witnessing them distribute marijuana.

“Under federal law, it is unlawful to possess marijuana,” Malecki said.

DCMJ set up on the sidewalk at 1st St NE and Constitution Ave, a corner sandwiched between Senate office buildings and the Supreme Court, to give away two joints to any person with a valid Congressional ID — be it a member of Congress, staffer, intern, custodian or journalist — 21 years or older.

Shortly after they began, Capitol Police arrested two of the demonstrators and warned the rest not to block the sidewalk. After the group cleared a path through the sidewalk, the police continued to arrest people handing out joints.

DCMJ member Jessica Laycock said prior to being arrested that it was a perfectly legal demonstration on DC land.

“We know that our members have not broken any laws here today,” Laycock said.

Capitol Police arrested several people April 20th, 2017 at a DC marijuana giveaway a short walk from the Capitol building. Pictured is a marijuana plant at the DCMJ joint giveaway.

DCMJ had planned for weeks to have two days of protests. The event for April 20, a holiday celebrated by pot enthusiasts, was to give people in Congress marijuana and raise awareness. DCMJ announced another event for Monday, where members will go the Capitol and smoke marijuana to violate federal laws and get arrested on purpose. That event is to call on legislators to respect local and state marijuana laws, remove marijuana from the list of Schedule 1 drugs and move toward legalization.

The latter event is scheduled to take place when Congress is in session. Schiller said he expected the Capitol “smoke in” to go ahead.

“We have no intentions of backing down,” Schiller said.