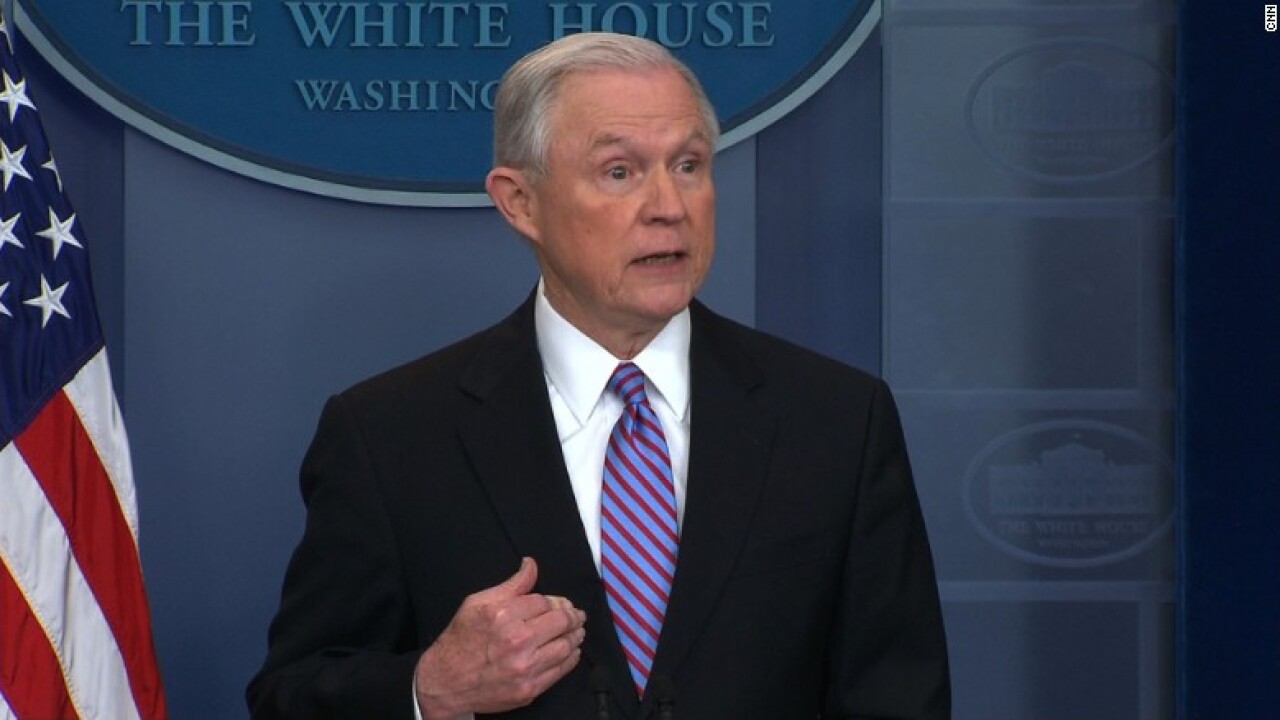 WASHINGTON — Attorney General Jeff Sessions outlined Monday how the Trump administration will use federal funds to crack down on “sanctuary cities” and states that choose not to comply with federal immigration laws, as it has threatened to do since January.

The comments came after the Trump administration has made a concerted effort to pressure the so-called “sanctuary” jurisdictions as part of its aggressive push to enforce immigration laws.

The term refers to jurisdictions like major cities including Los Angeles, Chicago and Philadelphia that have policies in place that limit cooperation in enforcing federal immigration laws and protect local immigrant populations. One of the biggest areas of disagreement between cities and the federal government is over allowing federal immigration officers to make arrests in local jails and prisons.

On Monday, Sessions reiterated that cities and states hoping to receive federal funds or grants must comply with federal law requiring local authorities to share citizenship or immigrant status of individuals to the Immigration and Naturalization Service if requested. The attorney general did not specify which cities or which funds the department may claw back as it has threatened.

Sessions said that local jurisdictions that apply for Justice Department grants and funds will be required to certify they are complying with that law, as was first required by an Obama administration policy put out last summer.

Nevertheless, that specific code does not apply to all forms of sanctuary policies. While local authorities are required to send information about who they arrest to federal authorities, many of the sanctuary policies that DOJ and the Department of Homeland Security find most objectionable are not honoring “detainers” — requests to hold individuals eligible for deportation for up to 48 hours beyond what is required by criminal courts — so that immigrations officials can come pick them up.

“The American people are justifiably angry. They know that when cities and states refuse to help enforce immigration laws, our nation is less safe,” Sessions said, adding that the Trump administration will use “all lawful steps to clawback” all funds that have already gone to states or cities that “willfully violate” the law.

Sessions urged “our nation’s states and cities to consider carefully the harm they are doing to their citizens” by opting to be sanctuary cities, telling reporters that the Justice Department anticipates awarding more than $4.1 billion in grants through its Office of Justice Programs and Community Oriented Policing Services.

In recent weeks, the Trump administration has stepped up its criticism of sanctuary cities. Last week, it published its first weekly report on detainers that are declined, an effort to name and shame jurisdictions that don’t comply with the government and highlight specifically the dangerous criminals among the undocumented immigrant population.

But since the Trump administration first articulated its intention to punish sanctuary cities by taking away federal funds, it has not articulated which monies could be withdrawn and what cities meet its standard for doing so.

President Barack Obama’s administration, in a letter to a member of Congress asking for guidance on sanctuary cities, also articulated how they required all grant applicants to combat with “all acceptable Federal statues, regulations, policies, guideline and requirements.”

Most experts agree that legal precedent — including a decision heralded by conservatives regarding Obamacare — makes clear that the federal government cannot broadly use federal funds as a stick by which to coerce local jurisdictions into certain actions. The government would likely be limited to pulling funds that it can prove are related to the policy it is targeting, namely immigration enforcement.

Cities and states have maintained that they are not only in compliance with the law, but actually acting on behalf of public safety in establishing “sanctuary” policies.

“Despite what Attorney General Sessions implied this afternoon, state and local governments and law enforcement have broad authority under the Constitution to not participate in federal immigration enforcement,” New York Attorney General Eric Schneiderman said in a statement. “As my office’s legal guidance makes clear, President Trump lacks the constitutional authority to broadly cut off funding to states and cities just because they have lawfully acted to protect immigrant families. Public safety depends on trust between law enforcement and those they bravely serve; yet, again and again, President Trump’s draconian policies only serve to undercut that trust.”

Erwin Chemerinsky, Annie Lai and Seth Davis, professors at the University of California at Irvine School of Law, wrote in December that “the federal government can no more require state and local governments to help it carry out mass deportations than it can require local officers to investigate and enforce federal gun laws.”

Trump “ignores the 10th Amendment, which the Supreme Court has repeatedly interpreted to prevent the federal government from ‘commandeering’ state and local governments by requiring them to enforce federal mandates,” they wrote in The Washington Post.

Sessions’ announcement also followed an executive order Trump signed in January that was designed to crack down on sanctuary cities by stripping “federal grant money from the sanctuary states and cities that harbor illegal immigrants.”

Many mayors, despite Trump’s order, have said they intend to stand firm against the administration.

“I want to make very clear,” Chicago Mayor Rahm Emanuel said after the executive order. “We are going to stay a sanctuary city.”

“San Francisco is a sanctuary city and will not waiver in its commitment to protect the rights of all its residents,” San Francisco Mayor Edwin Lee said in January.