N.C. scientist hopes her hypoallergenic peanut will be new standard 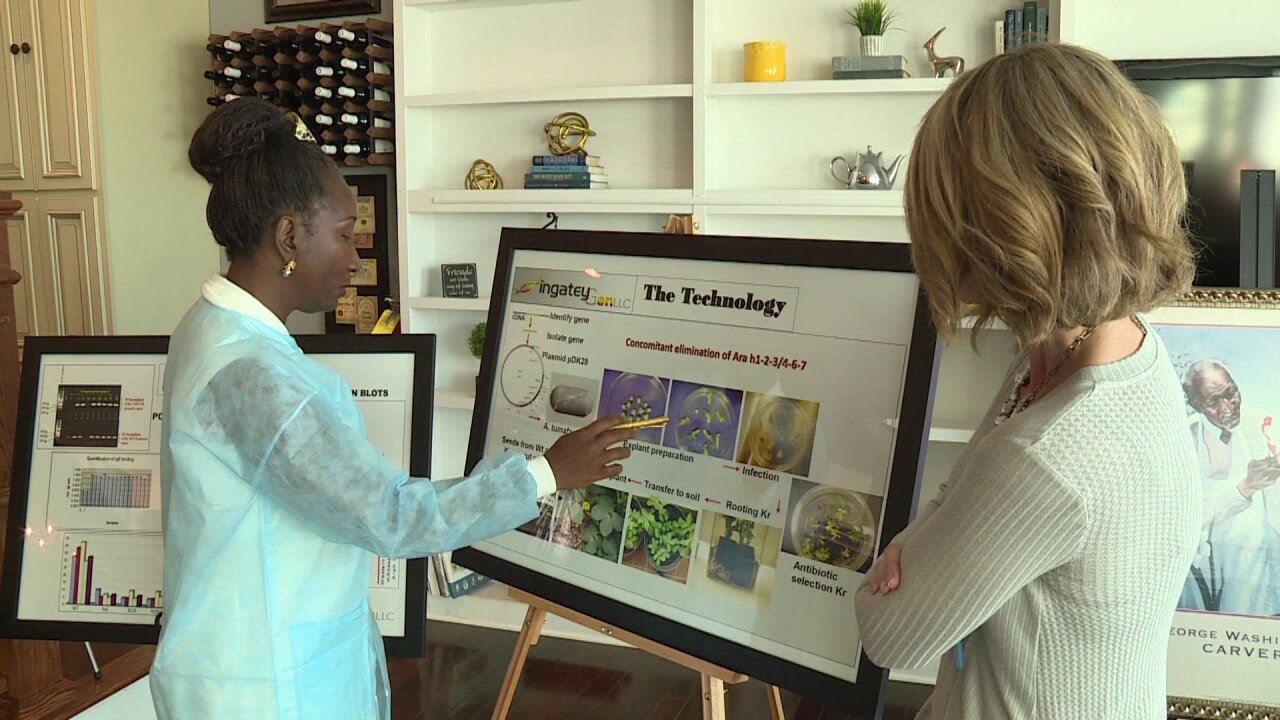 ELIZABETH CITY, N.C. -- A North Carolina scientist has developed a hypoallergenic peanut that she believes will save lives.

“You have many, many proteins in peanuts; three of these proteins can trigger allergic reaction in a specific group of the human population with people allergic to peanuts,” Dr. Dodo said. “Basically what we are doing is identifying the proteins and use a scientific approach to specifically target these proteins and eliminate them.”

Studies show nearly three million people have a peanut allergy and it is the leading cause of anaphylaxis death.

“It's a big deal to have an allergy, it`s not just a joke,” said 10-year-old severe peanut allergy sufferer Josh Mouser.

Josh`s parents learned that right after he was born -- when he developed an umbilical hernia. Josh was diagnosed with severe allergies soon after, but it wasn't until he was two and accidentally ate something that was manufactured in a facility with peanuts, that it would really hit home for mom and dad.

“He didn't even eat what he was allergic to. It had come off a conveyor belt and had touched something for seconds and he was that sick from it,” said his tearful mother Jeanne Mouser.

Jeanne Mouser and her son Josh, who has a severe peanut allergy.

“What would it mean to you if you were living in a world where all the peanuts were allergen free?” Dr. Dodo asked the Mousers.

It's that question that has brought the Mousers and more than 100 families to Elizabeth City to meet with Dr. Dodo as part of her research.

“I’ve dedicated my life to finding a solution to peanut allergy and bring it to market so that we can at least feel that I’ve made a positive impact to society and saving lives of children,” said Dr. Dodo.

“We are targeting major proteins Ara h1-2-3 and two of the minor 6 and 7,” said Dr. Dodo as she points to a diagram of the technology.

The allergen-reduced seed is then tested next to a conventional peanut, using the plasma or blood of allergy sufferers like Josh.

“With a child who has peanut allergies (he) already have developed antibodies in his blood so when you are testing our peanut with it you can tell whether it match or not,” explained Dodo. “When you test it with a conventional peanut you can see a bend a positive bend for the presence of the allergen.”

“When you test it after you’ve gone through our product, you test it with the hypoallergenic peanut -- you have either a reduction in the bend or nonexistence of the bend,” Dodo added.

Dodo is not the only researcher trying to reduce or eliminate allergens in peanuts, and the research is not considered fringe science.

In fact, in 2014, the United States Department of Agriculture logged about the life-saving potential of similar research being conducted at North Carolina A&T State University.

Still, Dodo emphasized that her goal is not to sell hypoallergenic peanuts to people with severe allergies.

“We are not trying to get the children who are allergic to peanut to eat the hypoallergenic peanut, no, but if there was a contamination or accidental ingestion then the child that is allergic to peanut is not going to die!  He or she will live,” Dodo exclaimed.

The scientist hopes one day that her hypoallergenic peanut will replace all others.

“It still boils down to yield the farmer needs to make a decent yield to be profitable, but yet I think it`d be really great for the companies, for their marketing, they can market a safer peanut,” said North Carolina farmer Jim Morris.

“The farmer who grows the conventional peanut is going to see the same yield with this peanut,” Dodo said.  “We did a survey and most who we surveyed are willing to pay 20 to 25% premium on the hypoallergenic peanut, so even if the yield was a little less the farmer will make much, much, much more growing our peanut.”

“It still boils down to yield the farmer needs to make a decent yield to be profitable, but yet I think it`d be really great for the companies, for their marketing, they can market a safer peanut."

Dodo`s company IngateyGen derived from the word peanut in her West African language, has received a federal small business innovation research grant of $225,000 and a matching $50,000 grant from the North Carolina department of commerce. It also recently signed a partnership agreement with Fayetteville State University. This will give IngateyGen access to additional critical pieces of equipment and scientists to move the research forward as they fine tune products.

Pnut4Life TM, the first version of hypoallergenic peanut seeds, is already available. Those seeds have gone through several rounds of testing, including three years of field trials under the guidance of the USDA and APHIS.

Dodo is also working hand in hand with the National Science Foundation.

Dr. Dodo meets with the Mouser family for research in her hypoallergenic peanut.

“NSF can only do so much,” she said. “We really need the support of the candy industry, the confection industry, the peanut processing industry. We need to have the financial support to be able to take the project quickly to market.”

Dodo is in the process of petitioning the USDA and FDA to bring the hypoallergenic peanut to store shelves. She is hopeful that will happen in the next two years, and give renewed hope to the nearly two percent of peanut allergy sufferers like Josh, and his family.

“It would definitely take worry out of my life because I wouldn’t have to worry as much that those people don’t know what they’re doing with allergy they have no idea how severe it is,” said Josh Mouser. “I get stressed with people saying why can’t you eat this? You should be able to eat this, it doesn’t have nuts why aren’t you eating this? It just really hurts -- not physically but mentally.”

“Most parents don`t send their kids to school and say one and five kids isn`t going to make it today, you tell me if it`s important? Absolutely, it makes all the difference in the world,” said Josh’s mom, Jeanne Mouser.

“Our goal is to have all the peanuts existing, all the products that use peanut, use hypoallergenic peanuts,” Dodo said.

CBS 6 reached out to the Candy and Snack Food companies that Dr. Dodo has been in communications with, including Mondelez International, Kraft Foods, and MARS Incorporated. Kraft and Mars did not respond to our request for comment by time of publishing.

“Unfortunately, we don’t have anything specific on this issue that we can contribute at this time to your story. But thank you all the same for thinking of us,” said Richard Buino, with Mondelēz International.

Dodo pointed out that the cost associated with food recalls, food alerts and lawauits is very costly for the majority of candy companies.

"When you look at the corporation the candy companies who have to recall certain products by FDA or sometime you have a product that triggers an allergic reaction and there is a death associated you have lawsuit," said Dodo.

Dodo says the FDA is not requiring clinical trials for the hypoallergenic peanut because the target market is not individuals allergic to peanuts.

IngateyGen is also in talks with the U.S. Army because research has shown that food allergies often have a greater impact on active military personnel and their dependents, than on the general public.

Dodo said this process can be applied to other foods in the future, too.

"We know the process, the technology we feel that we have mastered it, and so yes it can be applied to many other differed types of food," she said.