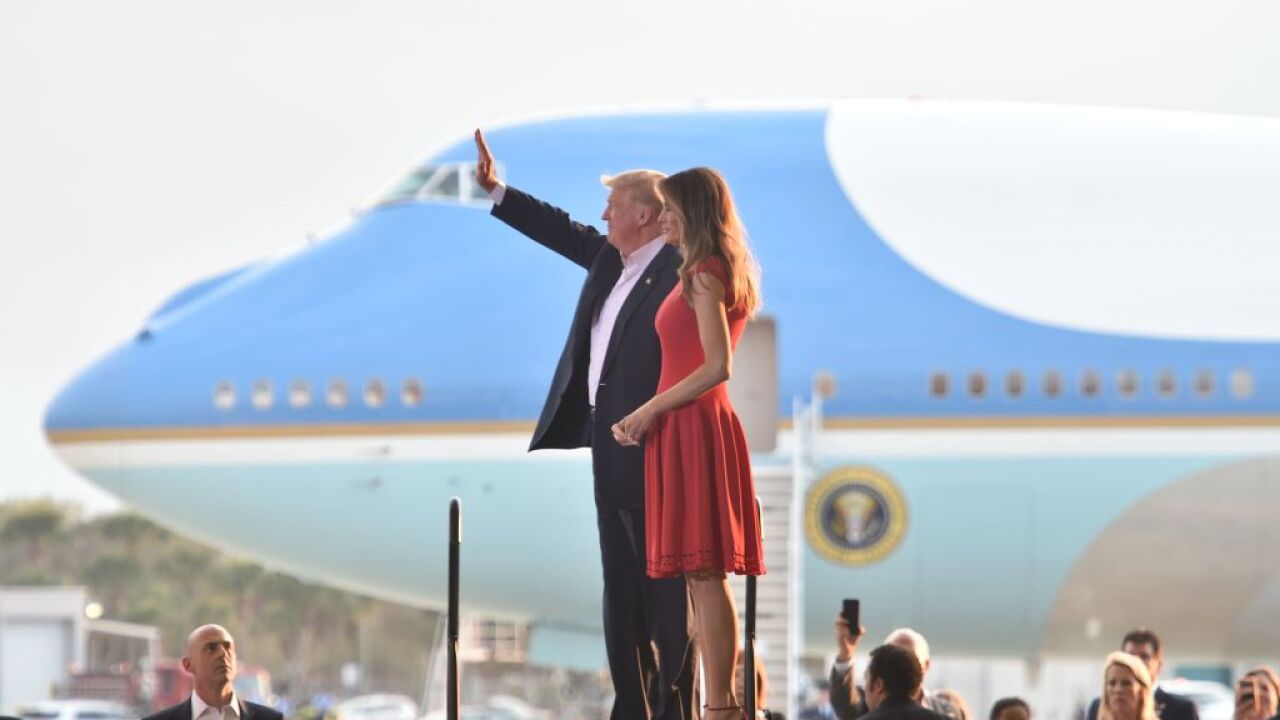 WASHINGTON — After a month of arduous and, at times, turbulent governing, President Donald Trump returned Saturday to what he really loves: Campaigning — and bashing the media.

Trump didn’t declare what, exactly, he was campaigning for in Melbourne, Florida, after flying in from his Mar-a-lago estate, but he was greeted by 9,000 supporters at Orlando Melbourne International Airport, local police said.

Trump, ready for some relief from the confines of Washington and the limitations of the house he ran to occupy, reverted back to the campaign-style event, basking in what energized him for months during the slog of the presidential campaign: The adulation of his supporters — and attacks on the press.

“The dishonest media, which has published one false story after another, with no sources, even though they pretend they have them — they make them up in many cases, they just don’t want to report the truth and they have been calling us wrong now for two years — they don’t get it, but they are starting to get it,” Trump said Saturday.

Trump touched on a variety of campaign promises he pledged he would enact as president, including calls to bring jobs back to the US and replace Obamacare. He also spoke of the need to keep terrorists out of the US and criticized judges who blocked his executive order on immigration.

At one point, Trump invited a supporter up to the stage, who was briefly stopped by the Secret Service before the President urged agents to let him come up and address the audience.

“I wouldn’t say Secret Service was thrilled with that … but we know our people,” Trump said.

White House aides took a hands-off approach to Saturday’s event, which is being run by Trump’s 2016 campaign, Donald J. Trump for President Inc.

On Friday, though, White House spokeswoman Sarah Huckabee Sanders said Trump was headlining the event as a way to go around the media.

“People in this circle don’t always do the best job delivering his message (because) nobody does it better than he does,” Sanders said about the media.

“So he can do that very easily by taking the stage and talking directly to the people of America, addressing their concerns and being able to properly express exactly what he’s doing and what his administration has done over the last month,” Sanders said on Air Force One as the plane headed south to Florida.

“They have become a big part of the problem. They are part of the corrupt system,” Trump said Saturday. “Thomas Jefferson, Andrew Jackson and Abraham Lincoln — many of our greatest presidents fought with the media and called them out, often times on their lies. When the media lies to the people, I will never let them get away with it. I will do whatever I can so they don’t get away with it. They have their own agenda and their agenda is not your agenda.”

While sources tell CNN that Trump feels cooped up in the White House and is itching to break out, Saturday’s event could also be a way for Trump to reset his administration after a chaotic month where the President was forced to fire his national security adviser, struggled to roll out his executive order banning travel from seven majority-Muslim countries and strained to explain a growing story about how members of his 2016 campaign made repeated contact with Russian individuals known to US intelligence.

Trump’s presidential campaign was defined by raucous events where he would deliver hour-long stemwinders, responding directly to the chants of the crowd and seemingly plugging into the energy that his supporters were throwing his way.

Former campaign aides said Friday that they were not surprised Trump was getting back on the road so early in his first term, in part because it was what fueled him for months on the campaign trail.

Michael Caputo, a former senior adviser to Trump’s campaign, said he expects this sort of campaign-style event will be the “first of many.”

“He grew very familiar with the rally concept and I expect him to return to where he is comfortable when he needs to recharge,” Caputo said. “The fact that Trump showed us a new way of winning should have given everyone a hint that he would show everyone a new way of governing.”