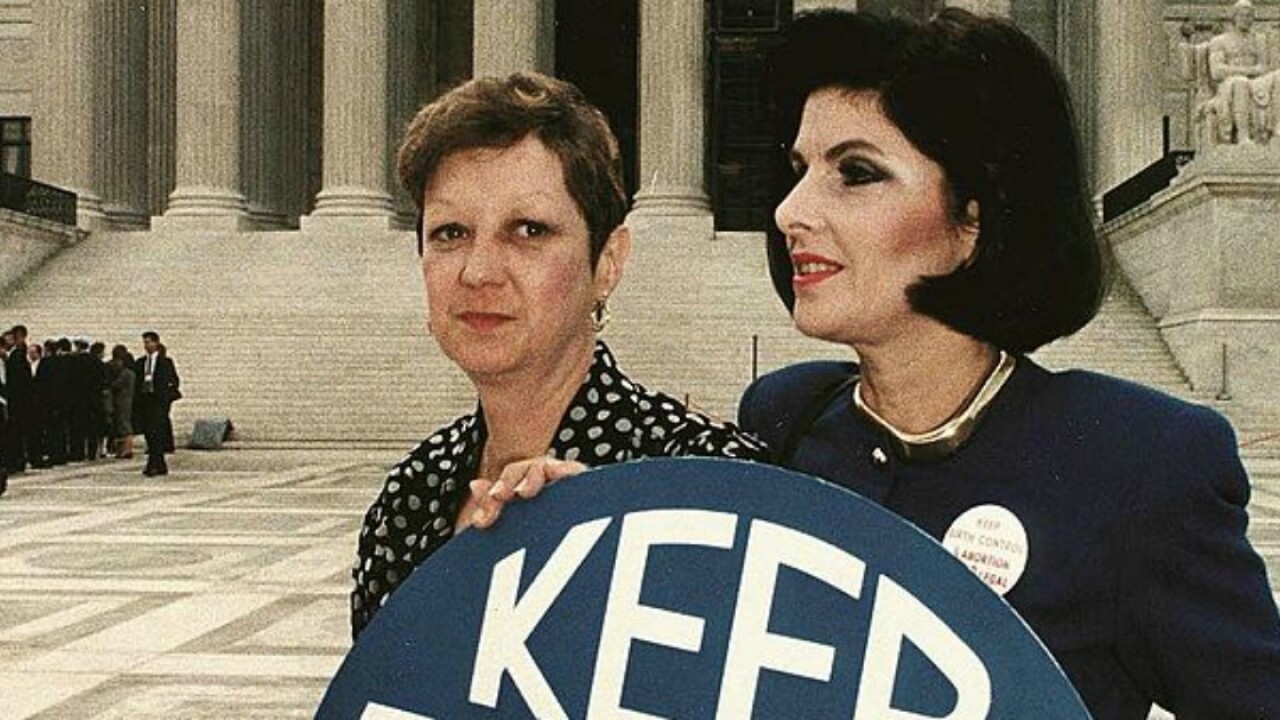 Norma McCorvey, known as “Jane Roe,” the anonymous plaintiff in Roe v. Wade, the US Supreme Court case that established a constitutional right to abortion, died on Saturday, a priest close to her family said. Multiple media sources said she was 69.

McCorvey died at 12:07 p.m. ET in the Houston area with her daughter, Melissa, and several grandchildren present, the Rev. Frank Pavone said on Facebook.

Pavone did not give the cause of death but said McCorvey had been a heavy smoker and had respiratory problems. She’d been in and out of assisted living facilities over the past year.

McCorvey once supported the pro-choice movement but switched sides in 1995. She converted to Christianity, joined anti-abortion activists and started an outreach group called Roe No More.

“I am dedicated to spending the rest of my life undoing the law that bears my name,” McCorvey said in an anti-abortion TV advertisement.

This file photo shows Norma McCorvey(L) formally known as “Jane Roe”,as she holds a pro-choice sign with former attorney Gloria Allred(R) in front of the US Supreme Court building 26 April 1989,in Washington,DC, just before attorneys began arguing the 1973 landmark abortion decision which legalized abortion in the US. (Photo credit should read GREG GIBSON/AFP/Getty Images)

McCorvey began her association with one of the nation’s most contentious and volatile sociopolitical issues in 1970 when she became the lead plaintiff in a class-action lawsuit challenging the Texas law that prohibited abortions except to save a pregnant woman’s life. The defendant was Henry Wade, the longtime district attorney in Dallas County.

A federal court declared the Texas law unconstitutional and the case was appealed to the Supreme Court, which handed down its ruling on January 22, 1973.

The 7-2 ruling affirmed the legality of a woman’s right to have an abortion in the United States under the 14th Amendment to the Constitution and sparked a political debate that remains charged to this day.

“Prior to Roe, whether one could obtain a legal abortion in the face of an unwanted pregnancy was a crapshoot,” David Garrow, author of “Liberty and Sexuality: The Right to Privacy and the Making of Roe v. Wade,” told CNN on the ruling’s anniversary in 2013. “For 40 years now, it’s been a constitutionally guaranteed right.”

McCorvey, who was on her third pregnancy when the case was filed, never had an abortion.

She gave birth to a girl, who was given up for adoption. The Supreme Court ruling came several years after the birth.

In the 1980s, she went public with her identity and wrote a book titled “I Am Roe: My Life, Roe v. Wade, and Freedom of Choice.”

In the book, McCorvey, a ninth-grade dropout, describes a tough life, explaining that she suffered physical and emotional abuse as a child, spent some time in reform school in Gainesville, Texas, and was raped as a teenager. A husband whom she married at 16 later beat her. She also tells of her alcohol and drug abuse and experiences with lovers of both sexes.

Her first child, Melissa, was raised by her mother; her second child was raised by the father, and the couple agreed that McCorvey would never contact her.

She drifted through a series of dead-end jobs, including work as a bartender and a carnival barker. Once she went public with her story, she worked in several clinics where abortions were performed and did some public speaking, garnering publicity and a bit of celebrity.

In 1995, McCorvey was working at a Dallas women’s clinic when the anti-abortion group Operation Rescue moved its offices next door.

The Rev. Philip Benham, Operation Rescue’s national director, described her as being “super hard-core” in her support of abortion rights. “She couldn’t stand us. She hated us,” he said.

She got to know Benham during smoke breaks outside her office and accepted an invitation from the daughter of the group’s office manager to attend church. That night, she converted to Christianity.

She was baptized in August 1995 in a swimming pool at a Dallas home. The baptism was filmed for national television.

McCorvey then began working for the anti-abortion movement.

Lawyers for McCorvey filed a motion with the US District Court in Dallas in 2003 to have the decision overturned and asked the court to consider new evidence that abortion hurts women. An appeals court dismissed the motion in 2004.

Pavone said McCorvey lived much of her life in Dallas but moved to the Houston area to be close to her daughter Melissa, who was with her when she died.

He didn’t know the names of her two other children or where they lived.

“Norma has been a friend of mine, and of Priests for Life, for more than 20 years,” Pavone said, referring to a Catholic anti-abortion group he works with. He said she later came “to be genuinely sorry” for her role in the famous abortion decision.

“I know what she would want to say to people. … Simply learn my story,” he said. “I think this is a great opportunity for the American people to reflect on the Roe v. Wade decision. It’s one of those issues you just can’t get out of the headlines after all these years, and she would say listen everybody, just learn my story.”