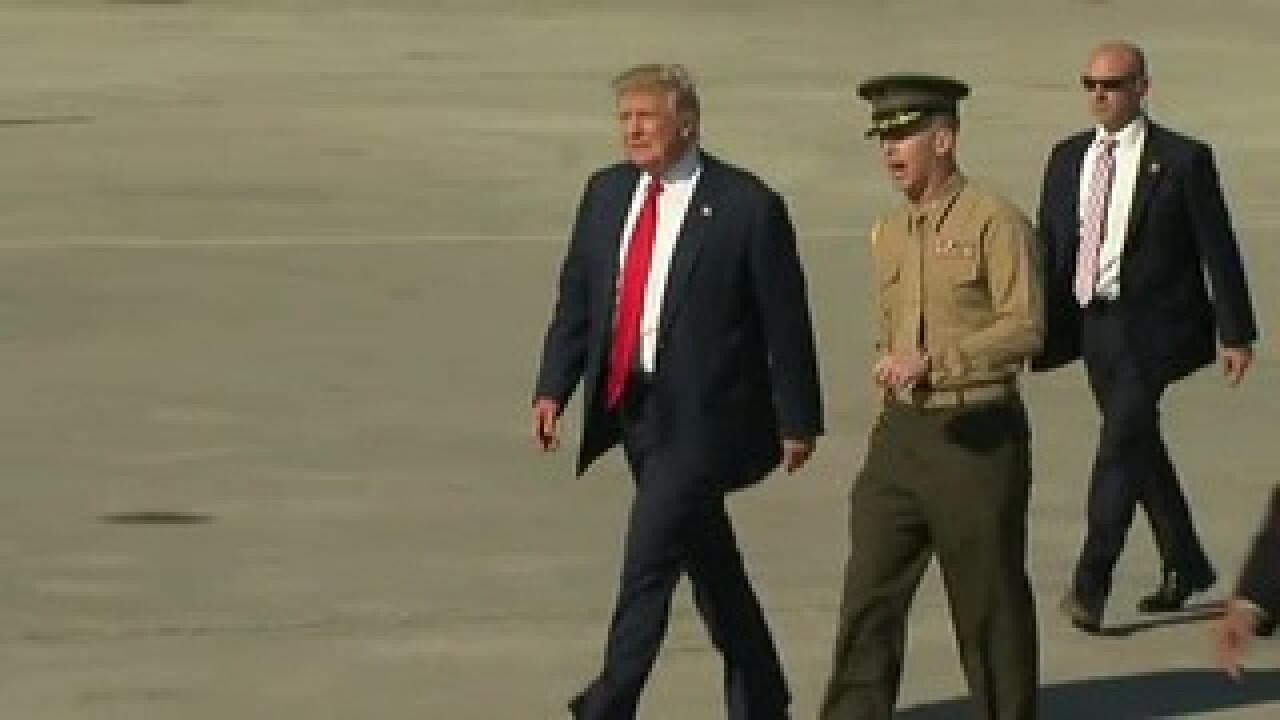 WASHINGTON — President Donald Trump widens his search for a new national security adviser this weekend amid concerns in Washington that the forced resignation of Michael Flynn leaves the White House unprepared to face any sudden foreign policy crisis.

Trump is expected to interview several candidates to replace Flynn, whose short tenure ended when he was asked to resign after misleading Vice President Mike Pence about his pre-inauguration calls with the Russian ambassador.

Trump tweeted Friday that he has four people in mind, including Gen. Keith Kellogg, who stepped in to the job on a temporary basis when Flynn quit. Other names are also being floated, though two potential candidates — former Army Gen. Stanley McChrystal and former CIA Director David Petraeus — are no longer in the mix, sources told CNN Friday night. The front-runner for the post, Vice Adm. Bob Harward, dropped out of consideration apparently over concerns that he could not bring his own staff to the NSC.

The President will meet over the next few days in Florida with former US ambassador to the UN John Bolton and Lieutenant General H.R. McMaster, a senior administration official said. Texas Sen. Ted Cruz told CNN in an interview that Bolton would make a “very, very, strong” national security adviser because he understands the threat from “radical Islamic terrorism.”

Bolton, a controversial figure who had to secure a recess appointment to serve as President George W. Bush’s ambassador to the United Nations after failing to win Senate confirmation, is emerging as a strong favorite among political staffers on the NSC.

While there is a lot of affection for Kellogg, the current NSC chief of staff, supporters believe that Bolton brings a mix of anti-establishment credentials that fit Trump’s political temperament and in-depth knowledge of Washington and how the foreign policy process works, a senior administration official said.

The official said Bolton is close to both CIA Director Mike Pompeo and Pence, who is “extremely powerful at this point” and so may have some sway on who gets the job. In the end, however, it will be up to Trump to decide who he is most comfortable working with. Should Bolton get the job, political staffers want Kellogg to stay on as NSC chief of staff.

The sense of limbo is causing concern among lawmakers and foreign policy experts who understand how the National Security Council corrals rival foreign policy power centers in the government and its crucial role at a time of crisis.

“There is no doubt after the departure of Flynn and everything that led up to it that the NSC is in a little bit of chaos,” Republican Rep. Adam Kinzinger of Illinois told CNN Friday. GOP Sen. John McCain also questioned the state of White House foreign policy earlier in the week.

Every presidency brings change and uncertainty to American foreign policy. But Trump’s arrival in the White House has been especially disorientating for US allies, since he adopted positions on the campaign trail — for example, questioning the value of US alliances in Europe and Asia that have underpinned post-World War II peace — that appeared to threaten wholesale upheaval in the international system. Adding personnel uncertainties to that mix is underscoring the sense of instability that Trump has brought international relations.

As they await their new boss, national security staffers are hunkering down and forging ahead with their work.

One senior administration official strongly refuted claims that the NSC was in chaos, arguing that it is functioning exactly as it should be, despite Flynn’s departure, and is primed for any crisis that would arise.

“It is dead wrong,” said the official, who requested anonymity to discuss a sensitive situation. “The NSC was instrumental in the rollout of the Venezuela drug kingpin designation, the NSC arranged a meeting with Venezuelan dissidents with the President. The NSC is instrumental in setting up, prepping and briefing all the President’s foreign leader calls of which there are a couple every day.”

“Everyone is carrying on as normal,” the official said, pointing to a string of successful meetings between Trump and foreign leaders in recent weeks.

Harward’s decision not to take the job revealed the fact that potential candidates will likely have to agree to keep on staffers already brought into the NSC.

In a statement to CNN, the former Navy SEAL cited family reasons for his decision. But a friend of Harward said he was reluctant to sign up because the White House seems so chaotic. A Republican official told CNN that Harward was not convinced he would be able to bring in his own staff.

Trump’s top aides have made clear that candidates that most of the top political appointees who came in with Flynn will stay — in a bid to avoid disarray.

“We are in an unprecedented situation,” the official said. “Somebody coming in is going to have to understand it is not going to be the way it would have been had they been picked November 10 and had a whole transition to pick their staff.”

One senior member of one of the delegations said that Trump and those around him had pleasantly surprised their visitors with evidence that they were beginning to understand the complexity of foreign policy and managing alliances, despite their inexperience.

Normally, a vacancy for a national security adviser would spark intense jockeying for position throughout the national security establishment in Washington — given the job’s proximity to the President and central role as the White House’s foreign policy first responder.

And Trump’s failure to find a quick replacement for Flynn is shining a spotlight on the internal tensions in his administration.

Harward’s decision revived Washington scuttlebutt about the extent to which political influences are weighing on the national security team in the White House following Trump’s executive order reserving a spot for his controversial adviser Steve Bannon in NSC principals committee meetings.

“If I had been in his position, being offered the top job in national security, a job that anyone in that profession would want, I would want to make sure I had control over the staff and that the NSC was not being influenced by the President’s political advisers,” said Tony Blinken, a former deputy secretary of state and deputy national security adviser for President Barack Obama.

“I suspect that Bob Harward, looking at this job, looking at this possibility would have said, ‘Yes, but that has to stop,’ and if he didn’t get those assurances, he is probably right not to do it,” Blinken told CNN’s Brooke Baldwin.

Bannon is not the only member of Trump’s political team who has carved out a sphere of influence on foreign policy. The President’s son-in-law Jared Kushner emerged as the key interlocutor between foreign leaders and the new president during the transition period and early in the new administration, diplomats said.

The official said the White House is concerned that the council — an organization that is already in an uneasy position after Flynn’s early exit — would be further destabilized if the top staffers in the organization were asked to resign in order to make room for the next national security adviser’s staff.

“They don’t want to see big changes at the NSC and therefore that is going to be a condition for anybody taking the job,” the official said.

But military officers especially, one White House aide said, bring with them a host of people, so encouraging staff stay could run counter to what the next National Security Adviser would want.

Harward’s decision not to accept the job also raised eyebrows because of the unspoken military code that when a President calls, service personnel salute and accept the mission.

Who has Trump’s ear?

The Defense Department has also welcomed the somewhat looser oversight being conducted by the Trump White House, which has had a lighter hand so far than the former Obama administration.

That new regime has also been noted at the State Department, where one official said that there was little “connective tissue” between Foggy Bottom and the West Wing.

“If you are working in an embassy or in a diplomatic role for countries around the world, you are wondering who has Trump’s ear, who is speaking on behalf of the United States,” Psaki said on CNN International on Friday.

Still, one of the ironies of the uncertainty surrounding the NSC is that foreign policy — at least as far as it relates to visits by key foreign leaders — has been one of the smoothest areas of the administration so far.