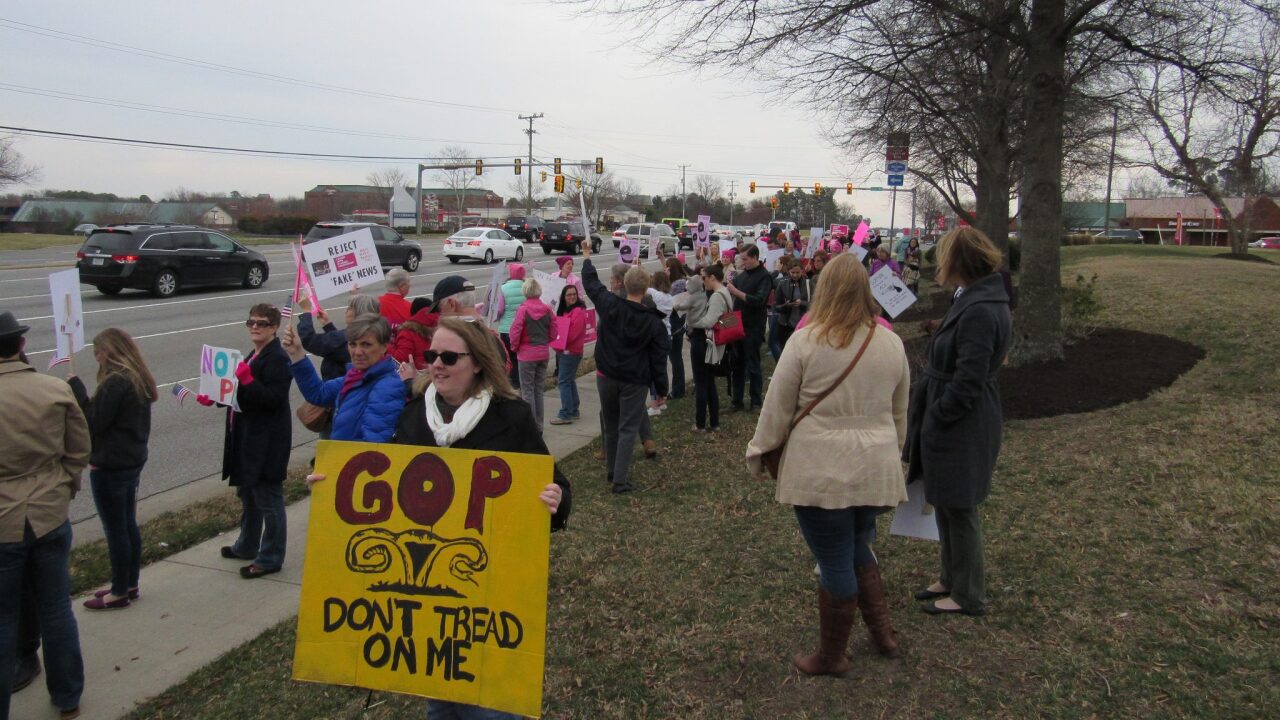 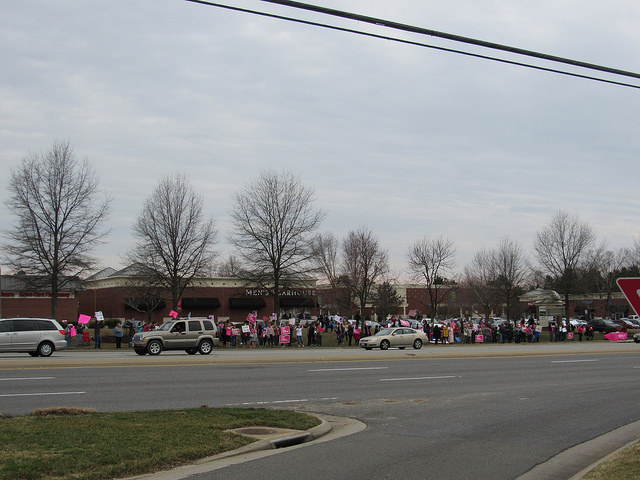 GLEN ALLEN, Va. — The feud between U.S. Rep. Dave Brat, who represents a swath of Central Virginia in Congress, and some of his female constituents escalated Saturday afternoon when nearly 100 Planned Parenthood advocates demonstrated outside his Glen Allen office.

The demonstrators stood across from Brat’s office at the corner of Broad Street and Cox Road to protest what they see as the Republican representative’s lack of communication with his constituency.

Supporters of Planned Parenthood – for which Brat has pledged to cut off federal funding – held up signs toward the approaching traffic, eliciting honks from drivers passing by.

The crowd chanted “We are constituents!” and “Dave Brat has got to go!” as well as “We are not paid!” That was a retort to Brat’s statement in an interview that the women who had been protesting against him were “paid activists on the far left.”

Speaking to supporters at Hanover Tavern on Jan. 28, Brat responded to questions about people asking him to hold a town hall meeting with his district by saying,
“Since Obamacare and these issues have come up, the women are in my grill no matter where I go.”

The quote inspired the “grill” theme of Saturday’s protest, which recruited participants through a Facebook page titled “Grilling with #BratWorst.” Women and men of all ages gathered with signs telling Brat they wouldn’t go away silently.

“We want to show him that we will remain ‘up in his grill’ until he meets with us to have a town hall,” said Nia Bentall, a community organizer for Planned Parenthood in Richmond.

Bentall said her involvement with Planned Parenthood stemmed from an experience in college when she took a friend who had been sexually assaulted to one of the organization’s clinics.

“There wasn’t anywhere else we could have gone,” Bentall said. “The care she received there was truly lifesaving, and I realized how important and what a unique role Planned Parenthood health centers play in communities. When they talk about defunding Planned Parenthood and that women can just go somewhere else, that’s not true.”

Bentall recalled that when she took her friend to a Planned Parenthood clinic, they had to walk past anti-abortion protesters. She said those protesters had a judgmental and shaming mentality. Bentall said she began to start advocating for Planned Parenthood when she realized that some elected officials, including members of
Congress, shared that mentality.

“Dave Brat needs to know that when he goes to Washington, D.C., his constituents are part of the overwhelming majority of Americans who do not support defunding Planned Parenthood,” Bentall said.

David Timberline, communications director for the Virginia League for Planned Parenthood, said the group’s concern is that Brat has been inaccessible when his constituents have tried to reach him to find out his views about certain health care issues, particularly repealing the Affordable Care Act and defunding Planned Parenthood.

“His constituents, who are coming out here in force, want to hear what his views are,” Timberline said. “For too long, [elected officials] have been able to hide from a big slice of their constituency, largely because of gerrymandering, and they think they’re safe because they only have to respond to their slice of the electorate.
This is showing them that there’s more that they need to pay attention to.”

Dolly Hintz, Timberline’s mother, was one of the women in attendance. Her main concern is that people overlook the full range of services that Planned Parenthood offers – including cancer screenings, contraceptive counseling and testing and treatment for sexually transmitted diseases – and focus just on abortion.

“They kind of stick on that one word, and that scares them,” Hintz said. “Planned Parenthood actually provides so many services that so many women need desperately.” Hintz added that the turnout at Saturday’s protest “shows that there are reasonable people of all ages that care about this.”

Brat represents Virginia’s 7th Congressional District, which includes parts of Richmond and Henrico and Chesterfield counties and stretches as far north as Culpeper.
Brat, then a professor at Randolph–Macon College, was elected to Congress in 2014 after upsetting House Majority Leader Eric Cantor. Brat has strong support among tea party conservatives.

He has called for repealing the federal Affordable Care Act, describing Obamacare as an “economically disastrous law and an unconstitutional power grab by our federal government” that puts America on “the Road to Serfdom.”

Brat has co-sponsored the Life at Conception Act, “which declares that the right to life guaranteed by the Constitution is vested in each human being at all stages of life, including the moment at which an individual comes into being.” As part of his pro-life agenda, Brat also has co-sponsored legislation aimed at “stripping Planned Parenthood of its taxpayer funding.” (Planned Parenthood does not receive federal funds to perform abortions; however, it gets federal money to provide other services.)