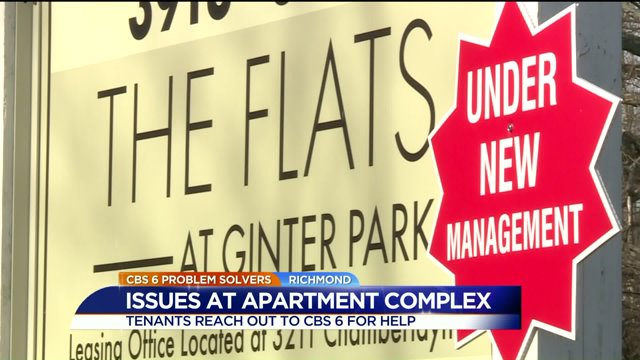 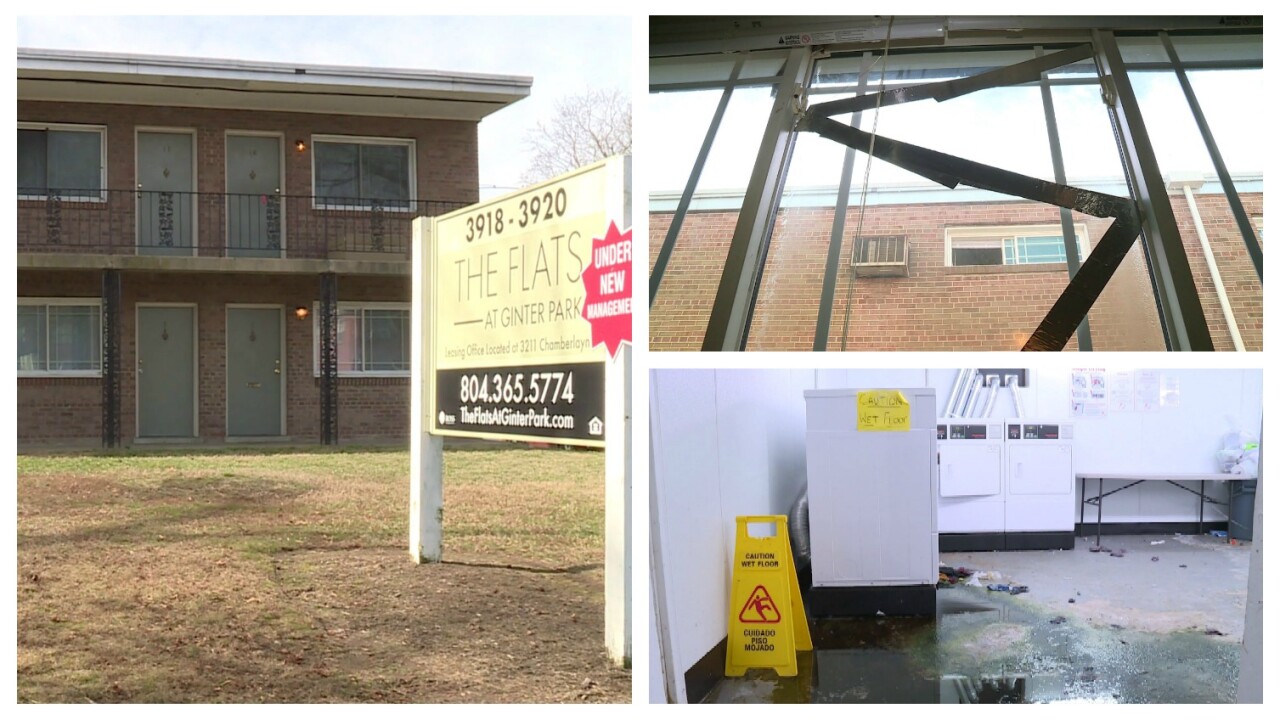 RICHMOND, Va. -- Broken windows, no heat, and sewage backing up into homes are just some of the problems people living at a Richmond apartment complex say they are dealing with.

Those renters at the Flats at Ginter Park say they want their money back and reached out to the CBS 6 Problem Solvers for help.

"It’s the worst experience. I want my money back and I just want to go," concerned tenant Brenesha Ellis said emotionally.

The Flats at Ginter Park

"I’ve been asking them… Please help me to do something about a window," said Susan Reuben.

CBS 6 investigated a series of complaints from some tenants living at the Flats at Ginter Park.

Susan Reuben is disabled and living with a broken window in her studio apartment.

"When it gets very cold, I can’t sleep out here,” said Reuben. “I have to sleep in the changing room in the closet. I have to sit in a portable wheelchair. I can’t lie down."

She says she reported the broken window to management months ago, but they have only covered the hole with black tape.

“I basically can’t sleep in the night with the windows. Anybody can come through the window," said Reuben. “My dog is the only protection I have here. My life is in jeopardy living here."

Allen Gibbs contacted also contacted CBS 6, fed up over what he says is raw sewage backing up in the laundry room.

He says he hasn’t seen a contractor nor a plumber to come fix the mess.

Another resident, Brenesha Ellis is just as frustrated, saying the three weeks she has lived there has been difficult because she doesn’t have heat.

"Basically, we have to live in the bedroom since we moved here. We don’t go in the kitchen or the living room,” said Ellis. “We had to fix dinner in here last night because it was way too cold.”

Ellis says management promised to give her a full refund and allow her to break her contract, if she agreed to not talk to the media.

Now, more than a week later, and she’s still waiting.

"I feel like I really been stomped on… like I just been walked all over top of," said Ellis.

CBS 6 reporter Sandra Jones went to the leasing office on Chamberlayne Avenue to question management, but a security officer stopped us at the door.

“This is still all private property. So, you can stand out there and I’ll go see if they want to come out,” said the security officer.

When he returned, he said no one is the leasing office is allowed to talk to the media.

“Are they aware of the number of issues? Conditions inside of the apartments?” asked Jones.

The security officer recommended that we call the apartment’s cooperate office.

CBS 6 did hear back from Brenesha Ellis who said her money has been refunded and she has been allowed to move out.

If you're a tenant at the Flats at Ginter Park or any other apartment complex, you can file a complaint with the Better Business Bureau.

You can also report any problems to Richmond's Department of Code Enforcement at 804-646-6398.