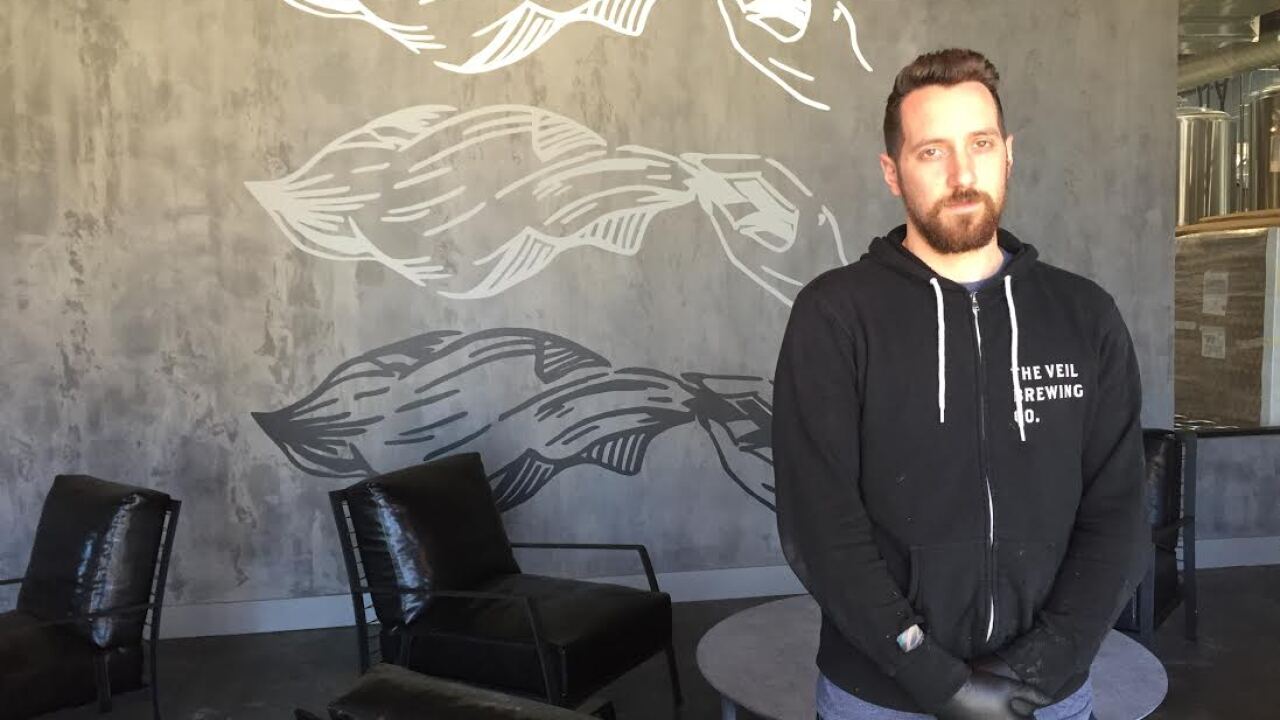 Matt Tarpey, head brewer at The Veil. The Veil Brewing Co. was rated number three in the world, out of a class of 10. The brewery was also honored as the state’s number one best new brewer.

RICHMOND, Va. — On any given Tuesday in Scott’s Addition — no matter the weather — a line of folks has formed by early afternoon, excited about the weekly can release from The Veil Brewing Company.

The highly-anticipated brewery opened on April 16, 2016 and it would be hard to tell by the crowds, the press and the products that head brewer Matt Tarpey has not been brewing all that long.  He stepped out for the first time as head brewer of The Veil with a pedigree that had people buzzing before they had even tried his beer.

On Monday, Jan. 30, RateBeer.com, an independent world site for craft beer enthusiasts that was established in 2000, confirmed that Tarpey’s work is turning heads — globally.

The Veil Brewing Co. was rated number three in the world, out of a class of 10, considered to be an “extremely elite bunch of the freshman class.”

The brewery was also honored as the state’s number one best new brewer.

“I am very humbled and honored to receive this award,” Tarpey wrote over email. “We work extremely hard to create and execute the best beers we possibly are capable of producing. We are extremely proud to represent Richmond/Virginia’s flourishing craft beer community.”

As Tarpey told CBS 6 in his own words during an interview “Behind the Veil” his career began in Virginia, in October 2010.

I started at O’Connor in Norfolk, as a shift brewer. Then I moved to Portsmouth Brewery in New Hampshire, a well-known brew pub in New England, in 2012. I was a shift brewer there for just over a year.

Then I moved over to The Alchmeist, in Vermont, who makes Heady Topper, a world famous double IPA – I was a shift brewer brewing Heady Topper.  That’s the only beer they brew. Then after that, I was the direct assistant brewer to Sean Hill at Hill Farmstead in Vermont, for just under two years. And for the last three out of four, Hill Farmstead has been voted the best brewery in the world. And then I have also done two apprenticeships with Jean Van Roy at Cantillon in Brussels, Belgium (also considered one of the best in the world.)

The honor is based on ratings of 6,500 new world wide brewers that were collected by RateBeer starting on or after the third quarter in 2015.

Two other Richmond breweries were rated the best in Virginia.  Lickinghole Creek’s Great Commander was honored as the top rated beer and  Hardywood Park Craft Brewery rated as the top brewer.

The first year, Tarpey hoped to produce around 3,000 barrels of beer. This year production will continue to ramp up and The Veil started the new year by acquiring their own canning line.

Tarpey said that experimentation and the “impossible quest for personal perfection” keep him inspired.

“We tirelessly rack our brains, tweaking each recipe to create a product that we are proud to release to the public,” he said. “The support of our regulars/locals and all other craft beer fans that visit The Veil inspire us to do our best.”

And which of their beers does one of the world’s best brewers prefer?

“Other than our spontaneous fermentation project that has yet to truly be shared with the public, I would say one of my favorite beers The Veil produces is Master Shredder,” Tarpey said. “Master Shredder is our 5.5% aromatic house IPA that is a staff favorite.”

You can join the line on Tuesday, Jan. 31, to get a taste of the fresh batch of it that will release in cans and draft.