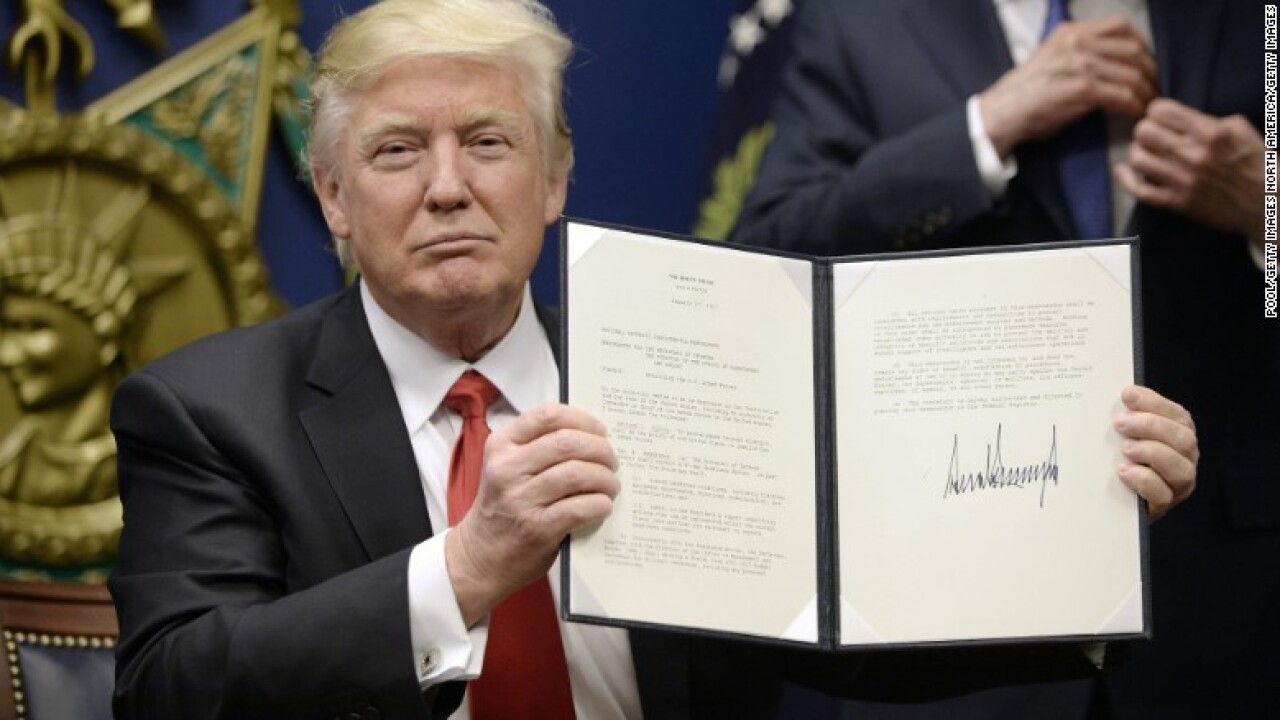 WASHINGTON — President Donald Trump’s seismic move to ban more than 130 million people from the United States and to deny entry to all refugees reverberated worldwide Saturday, as chaos and confusion rippled through US law enforcement agencies, airports and foreign capitals trying to grasp the US’s new policy.

At John F. Kennedy International Airport, where passengers can often spot the Statue of Liberty on their descent into New York, two Iraqis who had been granted visas to enter the US were detained and prevented from exiting the airport. Customs and Border Protection officials cited Trump’s new executive order, which bans citizens of Iraq and six other Muslim-majority countries — a total of at least 134 million people — from entering the US for the next 90 days. It also suspends the admission of all refugees for 120 days.

One of the men, Hameed Khalid Darweesh, worked with the US government for 10 years after the US invaded Iraq. He was released early Saturday afternoon due to provisions in Trump’s order that allow the secretaries of state and homeland security to admit individuals into the US on a case-by-case basis, a source with knowledge of the case told CNN.

The other man, Haider Sameer Abdulkaleq Alshawi, had been granted a visa to join his wife, who had worked for a US contractor in Iraq, and son, both of whom already live in the US as refugees. It was not immediately clear how many other cases like Darweesh and Alshawi’s were cropping up at other US airports, which appeared to have been blindsided by the new immigration rule that took effect immediately with Trump’s signature Friday afternoon.

Their attorneys filed a federal lawsuit Saturday morning challenging Trump’s executive order, likely just the first of many challenges in the legal fight many groups plan to wage to overturn Trump’s actions.

Trump on Friday said that his actions would “keep radical Islamic terrorists out of the United States of America.”

“We don’t want them here,” Trump said as he signed the order. “We want to ensure that we are not admitting into our country the very threats our soldiers are fighting overseas. We only want to admit those into our country who will support our country and love deeply our people.”

But those actions will not automatically allow green card holders who traveled to the affected countries back into the United States, two sources familiar with the matter told CNN.

Instead, those travelers will have to apply for a waiver to the executive order that instituted the ban, the sources said.

At the Cairo International Airport, Egyptian officials on Saturday began to turn back US-bound refugees and citizens of the seven countries now barred from entering the US.

“This is a new era we are witnessing,” a Cairo airport official said.

Airlines, meanwhile, scrambled to understand the new US policy and worked to warn passengers who might be affected before they boarded their flights.

Qatar Airways posted a travel alert on its website warning nationals of Iraq, Syria, Iran, Libya, Somalia, Sudan and Yemen that they could not travel to the US unless they are government officials, diplomats or representatives of international organizations. The German airline Lufthansa said it was not yet “in the position to outline the effect” given the new US immigration rule had only just been announced.

Trump administration officials responded to the wide ranging criticism, saying the US had to take these actions so it can reform its vetting procedures and that it was built out carefully over the past few weeks during the transition.

Iran, one of the countries whose citizens were banned, slammed Trump’s immigration order on Saturday as an “insult” and a “gift to extremists” and said it would swiftly reciprocate by banning US citizens from Iran.

“The US decision to restrict travel for Muslims to the US, even if for a temporary period of three months, is an obvious insult to the Islamic world and in particular to the great nation of Iran,” Iran’s foreign ministry said in a statement Saturday. “Despite the claims of combating terrorism and keeping American people safe, it will be recorded in history as a big gift to extremists and their supporters.”

The disarray also fell against a backdrop of swift condemnation from human rights groups and national security experts.

The International Rescue Committee, a humanitarian aid and refugee assistance group, called Trump’s decision to suspend refugee admissions “harmful and hasty” and noted that the US refugee program “makes it harder to get to the United States as a refugee than any other route.” Refugees must undergo an extensive vetting process — it typically takes more than two years to be admitted to the US as a refugee.

“In truth, refugees are fleeing terror — they are not terrorists,” David Miliband, the group’s president and CEO, said in a statement. “And at a time when there are more refugees than ever, America must remain true to its core values. America must remain a beacon of hope.”

The International Organization for Migration and UNHCR, the UN Refugee Agency, expressed concern about the provision in Trump’s executive order that would prioritize Christians fleeing persecution and conflict in Muslim-majority countries over Muslims fleeing those same countries.

“We strongly believe that refugees should receive equal treatment for protection and assistance, and opportunities for resettlement, regardless of their religion, nationality or race,” UNHCR and IOM said in a joint statement Saturday.

Ayoub said his group has already fielded calls from people around the world impacted by Trump’s executive order, including from students and legal US residents who are citizens of the seven countries banned by Trump and are now stuck overseas.

The executive order “is causing a really destructive impact on the Arab and Muslim community and on the Iranian community in the US,” Ayoub said.

Just as they did during the campaign, national security experts also warned that Trump’s plans to deny refugees entry in the United States and target Muslims or Muslim-majority countries through an immigration ban would be counter-productive or ineffective methods of protecting the US from future terrorist attacks.

“This banning of refugees is kind of a red herring,” CNN national security analyst Peter Bergen said on Saturday. “It’s not going to make any difference to the terrorism issue, which is overwhelmingly a United States problem. Because 9/11, of course, was carried out by 19 foreign-born Arab terrorists, I think we tend to conceive of this as a problem that comes from outside, when in fact, it’s really a problem that is internal to the United States right now.”

“It’s one of those things that sounds like it makes sense, but it doesn’t really when you look at the facts,” Bergen added.

House Speaker Paul Ryan on Friday, however, commended Trump for his executive order, noting, “our number one responsibility is to protect the homeland.”

“We are a compassionate nation, and I support the refugee resettlement program, but it’s time to reevaluate and strengthen the visa vetting process,” Ryan said. “President Trump is right to make sure we are doing everything possible to know exactly who is entering our country.”

The Trump administration’s action on Friday also indefinitely suspended admissions for Syrian refugees. The order also called on the secretary of homeland security to conduct a 30-day review to determine whether additional countries should be added to the ban.

A senior White House official told CNN on Friday that the list of seven countries whose citizens are now banned from the US was likely just a starting point.

The official said the administration would be “very aggressive” as it weighs how many more countries to add to the list.

Asked what criteria the administration will consider as it looks to expand the ban, the official said simply the “mandate is to keep America safe.”

But if that is the goal, many national security experts questioned why Trump’s executive order focused on banning foreign nationals from the US.

Citizens and legal US residents have carried out all deadly radical Islamist terrorist attacks in the US since 9/11 — not by foreigners visiting the US on a travel visa or by Syrian refugees.