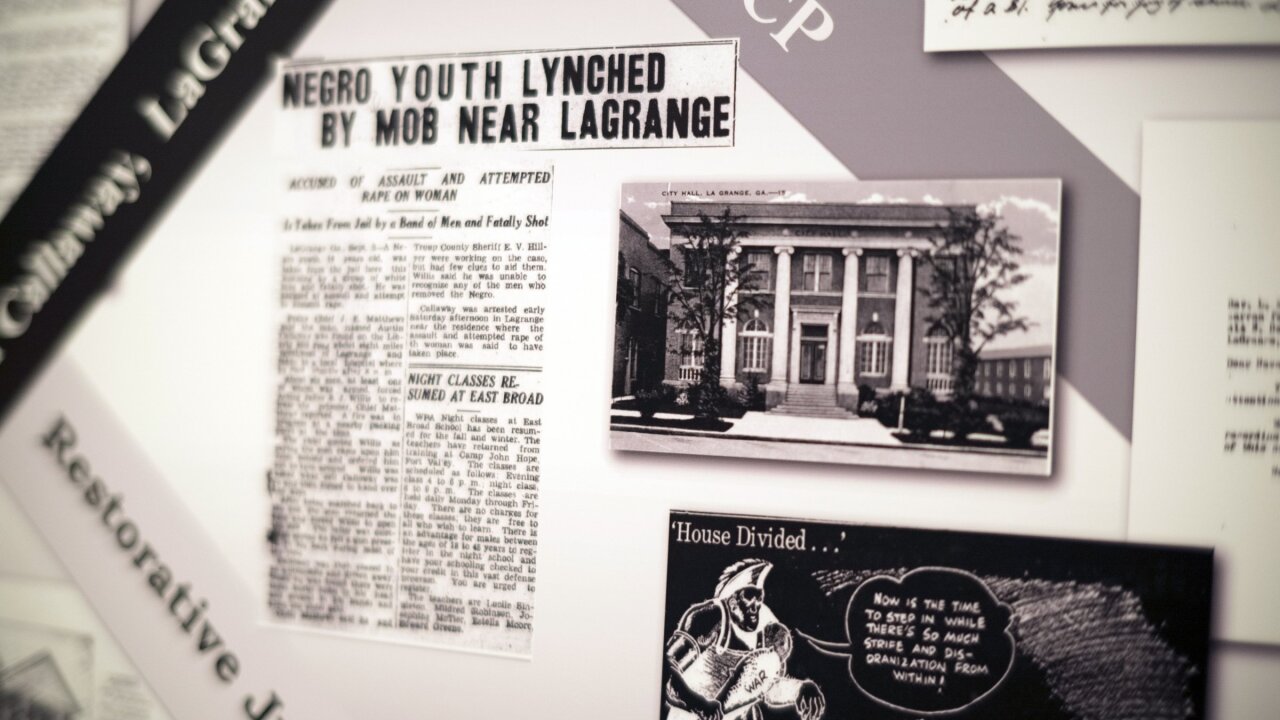 When it happened, news of Austin Callaway’s lynching on September 8, 1940, was buried on the last page of his hometown newspaper in LaGrange, Georgia.

LAGRANGE, Georgia — When it happened, news of Austin Callaway’s lynching on September 8, 1940, was buried on the last page of his hometown newspaper in LaGrange, Georgia.

“Negro succumbs to shot wounds,” read the LaGrange Daily News headline, squeezed between the personal ads and a report on a church fish fry. “Dies Sunday at Hospital, Struck by Seven Bullets.”

LaGrange police did not investigate the killing of the young man, reported at the time to be 16 years old. The courts did not act and the media did not follow the story after day one. In a scenario that sounds all too familiar, then and now, no one was held accountable.

It would take 76 years for city officials to admit what really happened.

When it happened, news of Austin Callaway’s lynching on September 8, 1940, was buried on the last page of his hometown newspaper in LaGrange, Georgia.

‘The truth shall set you free’

It was a rare public reconciliation for a lynching, attended by black and white people, police, civilians and clergy, sitting and standing side by side. Programs ran out as attendance exceeded expectations, forcing people into an overflow room in a building next door.

“Some would like to see us bury the past and move on,” Thornton said. “Until we have a full and complete acknowledgment of the past we can never heal.”

As one elected official after another took the pulpit, delivering moving apologies to the African-American community and pledges to do better, the tone evolved from somber to reverent to hopeful.

As Troup County State Court Judge Jeannette Little proclaimed to applause and cheers, “Ye shall know the truth, and the truth shall set you free.”

‘The past shapes the present’

Callaway’s lynching lived in whispers among African-Americans of that era. As they passed on, in the absence of official records, media accounts or a gravestone, Callaway faded from the town’s collective memory.

Almost no one in LaGrange today knew Austin Callaway’s name until recently — not his descendants, not the local NAACP president, not the mayor, not even Police Chief Louis Dekmar.

As the chief learned more about the lynching, he came to understand how it strained relations between his force and the African-American community. He decided it was time to apologize for law enforcement’s role and acknowledge its impact on community relations.

“The past shapes the present,” he said in an interview before the event.

The facts as we know them

About a dozen uniformed members of the force surrounded the congregation as he delivered his testimony.

His quest began with a conversation between two African-American women visiting police headquarters, he told the crowd. As they looked at historic photos hanging on the walls someone overheard one of them whisper “they killed our people” and shared the comment with Dekmar.

Through conversations with African-American elders he learned the facts of the lynching — little of which has changed since 1940.

While a fire tore through the fertilizer plant across town, six armed men wearing hoods stormed the jail where Callaway was being held. News reports from the time said Callaway was arrested on a change of assaulting a white woman, Dekmar said. But no official record remains today describing the allegations.

The mob ordered the lone jailer at gunpoint to open Callaway’s cell and fled into the night with him. Hours later, a passerby found him on a dirt road in a rural part of the county. He had been shot five times, with wounds in the head, hands and arms. Dekmar said. He was brought to the hospital and later died.

The community’s indifference was spelled out in the findings of the grand jury, to “get better locks for the jail,” he said.

Law enforcement failed to protect and serve Austin Calloway, “and for that I am profoundly sorry. It shouldn’t have happened,” he said, eliciting cheers from the crowd.

“I sincerely regret the role law enforcement played in Austin Calloway’s death, through action and inaction.”

An apology might ring hollow to the African-American community as an effort gloss over the past, he said. To the white community it may seem like ancient history that no one today is responsible for, he said.

Those involved may be gone, but the police force that neglected its duty to Callaway is still here, he said. “It bears the burden of that history.”

Law enforcement doesn’t carry all the blame, LaGrange College President Dan McAlexander said. One person, Warren Temple Pastor L.W.. Strickland, and two ministerial groups sent a letter to the NAACP calling for an investigation. Otherwise, there was no evidence that LaGrange College or any of the area civic organizations sought justice, he said.

LaGrange’s event is a rare official acknowledgment of a dark period in the history of the South.

The Equal Justice Initiative in Montgomery, Alabama, has documented 4,075 racial terror lynchings in Southern states between 1877 and 1950, few of which have been publicly acknowledged.

CNN found four instances of apologies for lynchings, including one in 2005 in Abbeville, South Carolina — site of the 1916 lynching of a black farmer named Anthony Crawford at the hands of neighbors. White ministers apologized for racism, church burnings and lynchings, including Crawford’s murder.

Callaway’s descendants, who only learned about him recently, welcomed the occasion as a chance to right wrongs and bring about healing in the community.

Deborah Tatum, whose grandfather was the brother of Callaway’s father, learned his name and his story in 2014 while researching genealogy. She was surprised to learn about the terrible secret but could understand why her relatives may have kept it hidden.

“They tried to protect us as much as they could from the bad things happening,” said Tatum, 55, a lifelong resident of LaGrange. “I don’t think they had the luxury of being able to go to the police and or the officials for help. It was such an era of hatred.”

Tatum’s uncle, James Callaway, has a harder time understanding how the killing remained a secret so long — or why it happened in the first place.

“Why would they be that down-low and dirty to do something like that to a kid?” he said. “It was like a black mark on the family.”

Tatum and Dekmar were not the only ones searching for the truth about Callaway.

A church book discussion about lynchings piqued Wesley Edwards’ curiosity in area hate crimes, leading to Austin Callaway. A longtime African-American friend, Bobbie Hart, confessed ignorance to the lynching, prompting them to form the group “Troup Together.” Through archival research and interviews, the pieced together parts of Calloway’s story.

The “knowledge deficit” is what worries Edwards. If Callaway’s lynching remained a mystery all these years, what else don’t they know about?

“If white people have one version of history and African-Americans have a different one, then we don’t know what we don’t know,” he said. “We’ve got to bridge that gap.”

Thursday’s event marks the start of the healing process, Hart said. What’s next? The need to save troubled African-American men in today’s communities, she said.

Topics such as poverty, incarceration and equal access to education bubbled up at various points in the ceremony, with less fanfare. It’s easier, perhaps, to build consensus around reconciliation and healing than it is for systemic issues.

“I believe the will is there,” she said, “We need to keep working together.”