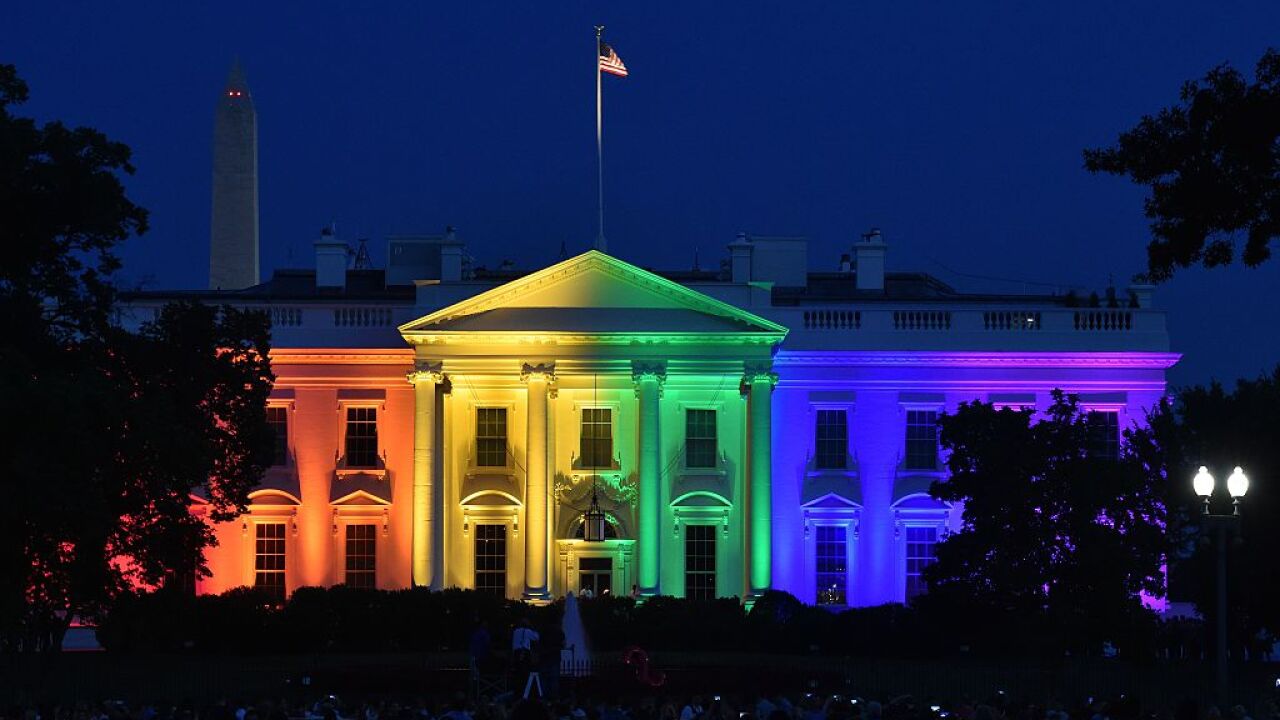 The White House is lightened in the rainbow colors in Washington on June 26. 2015. The US Supreme Court ruled Friday that gay marriage is a nationwide right, a landmark decision in one of the most keenly awaited announcements in decades and sparking scenes of jubilation. AFP PHOTO/MLADEN ANTONOV / AFP / MLADEN ANTONOV (Photo credit should read MLADEN ANTONOV/AFP/Getty Images)

WASHINGTON D.C. – Several organizations were quick to point out that in the transition between presidents, all mention of lesbian, gay, bisexual and transgender rights (LGBT) disappeared from the official White House website, which is transitioning over to the new administration.

During Barack Obama’s presidency, the web page whitehouse.gov/lgbt highlighted the administration’s victories and policy changes regarding LGBT rights. The page also outlined historic court victories and featured campaigns like the It Gets Better Project to help LGBT youth.

Within hours of President Donald J. Trump being sworn in as the 45th president of the United States, the page disappeared.

The page whitehouse.gov/lgbt redirected to a new “transition splash” page which invites people to “sign up for updates from President Donald J. Trump.”

As the new administration began to outline its own policy on the site, it excluded adding any mention of LGBT rights. The landing pages for climate change and civil rights also disappeared from the White House website, under the new Trump administration.

“When Donald Trump took the oath of office today, he vowed to be a servant for all Americans,” Human Rights Campaign President Chad Griffin said earlier in a released statement. “We will hold him to that oath.”

It is typical for the website content to change as the administration changes. Trump’s administration has been working on the outline of the new site, which has already been updated to reflect Trump’s policies and campaign issues. Typically the old content is archived as the new content goes live.

However, the terms climate change, civil rights and lesbian, gay, bisexual and transgender can not be found — and were not part of his campaign issues, either.

Outgoing President Barack Obama and his Administration made historic strides to expand opportunities and advance for LGBT citizens. Such policy included same-sex domestic partner benefits to support LGBT health, including the nation’s first comprehensive National HIV/AIDS strategy and banning the use of conversion therapy.

And in February 2011, the President and Attorney General announced the Department of Justice would no longer defend the Defense of Marriage Act’s provision defining marriage as only between a man and woman, leading to the Supreme Court’s landmark decision.

The top issues now on the site relate to many of Trump’s campaign promises, putting America first and strengthening jobs.  Other main issues listed are “standing up for our law enforcement community and making our military strong again.”

Less than two hours after Trump's #Inauguration, all mentions of #LGBT have been removed from https://t.co/OItQe9wFFC. pic.twitter.com/IcdLz5VQZK